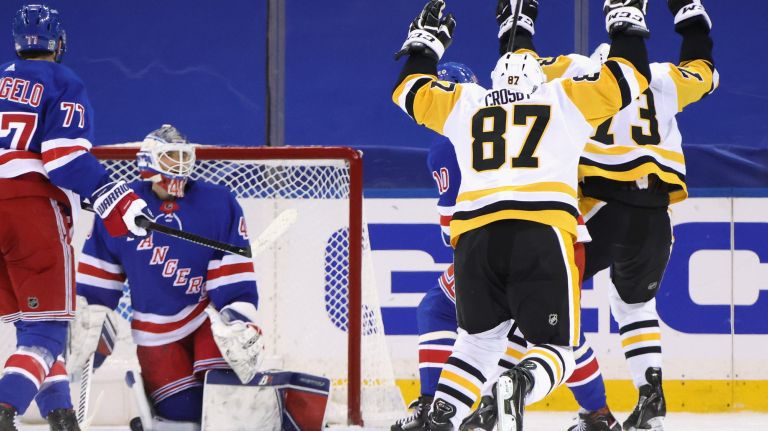 Sidney Crosby of the Penguins celebrates his game-winning goal against Alexandar Georgiev of the Rangers at 2:27 of overtime at Madison Square Garden on Saturday. Credit: Getty Images/Bruce Bennett

It’s in no way, shape, or form sustainable, but the Penguins did it again.

This time, they actually had a lead to blow before coming from behind, but as soon as the Rangers took the lead, the Penguins took the game over and never really looked back.

Importantly, the pucks went in too.

Now, if they can start stringing together full 60 minute efforts like that, maybe they’ll be fine going forward.

A total of three changes to the Pens lineup that fell 4-1 in Boston on Thursday, seeing new boy Yannick Weber come in for Kevin Czuczman, a name that sounds exactly like it’s spelled, Sam Lafferty getting another skate in place of Sceviour, and Casey The Smith enter in for Tristan Jarry.

For the Rangers, we got absolutely no John Joseph Louis Johnson THE Third action on the back end in front of Alex George with David Quinn opting to play Brenden Smith again with Tony DePlatformed.

#NYR pregame rushes are what we expected…

Just 12 seconds into the game, the Pens went on the powerplay and should’ve declined it because they made it 0-for-10 in their last 3+ games.

Between penalties, you could say that the Penguins weren’t playing poorly, they were simply playing.  It was a bunch of nothing hockey filled with nothing until the 4:35 mark of the period when POJ went off for interference.

DeSmith made a few nice saves on Zibanejad, Panarin and Trouba and the Penguins got the kill.

Then, about a minute to the minute after Joseph got out of the box, the Penguins would open the scoring with Joseph having a hand in the architecture.

The Rangers started this sequence off by getting some zone time, but it about abruptly ending when Olive Garden’s #1 Patron sent a shot way wide, caroming off the corner boards and handcuffing Panarin.

Kapanen RKOed him out of nowhere, stealing the puck and burning up ice on a 3v2.  Watch Zucker here, because his drive straight through the heart of the defense and straight to the net is what opens up the passing lane.

Kapanen still had a shit ton to do here, getting it up and over Smith’s stick and away from DePlatformed to hit POJ in stride.

Then, it was all POJ all the time to put it right on Zucker’s stick for the deflection.  What a pass.

Pens would have to go back on the kill four seconds after the post-goal draw with 87 going to the box.  They’d go on to kill it, lose Letang for the rest of the first period, and give up a goal 5 minutes after Crosby was released.

Here, the Penguins couldn’t hold the clearing attempt in at the attacking blue line.  They nearly escape though through Malkin, but he gets wedged out at the near boards and turns the puck over.  Looking like he was trying way too hard to do way too much.

Weber’s dropped off a little too much here and it allows Lemieux to take both him and Ruhwedel to the net, getting some greasy deflection from Di Guiseppe and beating The Smith as he crashed into the net.  Weird dumb goal.  Malkin woof.

Fair concern as the game progressed after Lemieux’s whatever goal to think that a bunch more nothing would happen to drag us mercilessly to the first intermission.

Then the Rangers iced the puck with under a minute to play and the Turbo Team stepped over the boards looking to send the Rangers to their room to read their art books.

Hard working little faceoff win for Blueger here, locating it through the skates and knocking it back to Joseph.

Then, POJ does it all, sending Phil Di Guiseppe’s ankles to the goddamn morgue to open up the shooting lane and getting the tip out of Tanev.  Big time play from the kid at the point.

No Letang to start the period.  Pens hit the post on the first shift.  Nature is healing. Penguins are the virus.

Then 2:19 into the period, Marino airmailed the puck over the glass to give the Rangers another powerplay.  DeSmith stood tall to help get the kill again.

The Penguins would get their second powerplay chance of the night a few minutes later.  You would be surprised how this one went.

First, the Penguins gave up a breakaway chance.

Rare moment where the Penguins got into the zone on the powerplay only for Rust to give it away and not have enough gas in the tank to get back with Johnny Easton.

Few minutes later, the Rangers looked threatening.  Malkin with a D-zone giveaway, only to keep an eye on the puck and knock down a centering pass, springing Kapanen to use his speed to break in on Georgie.  Quick little handsy move to flip it over the glove on the forehand.

That point too Malkin to 3rd all time in Pens franchise history, surpassing Double J.

Undeterred, the Rangers would find a way to draw level less than a minute later.

50/50 puck battle along the wall was won by the Rangers.  The Penguins got trapped with 4 players in a small area hoping to dig the puck out that when it made its way to the point, Tanev was completely isolated to cover both Rangers defensemen.  The D-to-D pass for the one-timer off the stick of Trouba left Tanev on an island and allowed Kreider to beat Weber to the net and bury DeSmith’s rough rebound.

Pens had to kill another penalty with 4:58 left to play after Marino got his helmet knocked off his head and played the puck.  A rule intended for player safety and what not.

What is not player safety is continuing to give the Rangers powerplays.

Because you knew Artemi Panarin was going to fucking bury you at some point of this recap.

This is that point.

Pens struggled to get a clear and as soon as Tony Bruschetta moved it back to Panarin at the point, you just knew the Bread Man was setting himself up for a one time bomb.

Also not player safety is giving the Penguins another powerplay, which is what the Rangers did with 3:20 left.  It’s not safe because it gave the Rangers a few more shorthanded chances before getting another PP of their own for the remaining 7.9 seconds until Kreider took a penalty after time expired for being a dickhead.

Little 4v4 to kick off the period.  Then a quick 5v4.  Then back to 5v5, which turned into a bit of a slog.  Didn’t ever really feel like the Pens were going to come back.

Then what felt like Malkin’s best shift of the year midway through the period got all the juices flowing below the belt.

Off the ensuing offensive zone faceoff after The Malkin Shift, a set play off the faceoff saw Guentzel get another one.  Ol JMarshhh broke down a similar one against the Ranges last week, but watch the path Guentzel takes here.

He goes across the entire zone, swings wide to get himself lost in coverage, and gives himself an angle to get body position on the defenseman in front.  It’s a little thing, but it sets himself up to not only be able to get a tip on the shot, but be in a position to jam at any rebound.

He gets to do both here, getting the bounce enough to get it beyond George and will it across the line.

Pens looked the most threatening to score the winner the rest of the way and get that crucial regulation win, but the Rags survived and took us to OT.

Rangers survived regulation.  But they could not survive Sidney Crosby and PO Joseph in overtime.

Vintage Crosby OT shift, taking over just like that time you showed up to an all you can eat seafood buffet in Myrtle Beach with a belly full of tequila.  The way he attacks Georgiev and the puck behind the net to free it up and keep it in the zone is exactly the same way you’d attack a tray of scallops, guided entirely by Jose.

But then the roles flip and as you load up on more shellfish, you start to feel the whirlwind.  That’s the Rangers, dying and stuggling to keep up with the spin cycle Crosby and Joseph put them through, eventually ending with them vomiting on their own shoes, cold and alone in a bathroom stall in the same way as Crosby snapping a shot five-hole on George. Rangers again on Monday at MSG.  Do it again.