5 rational thoughts about a complicated Celtics loss to the Lakers 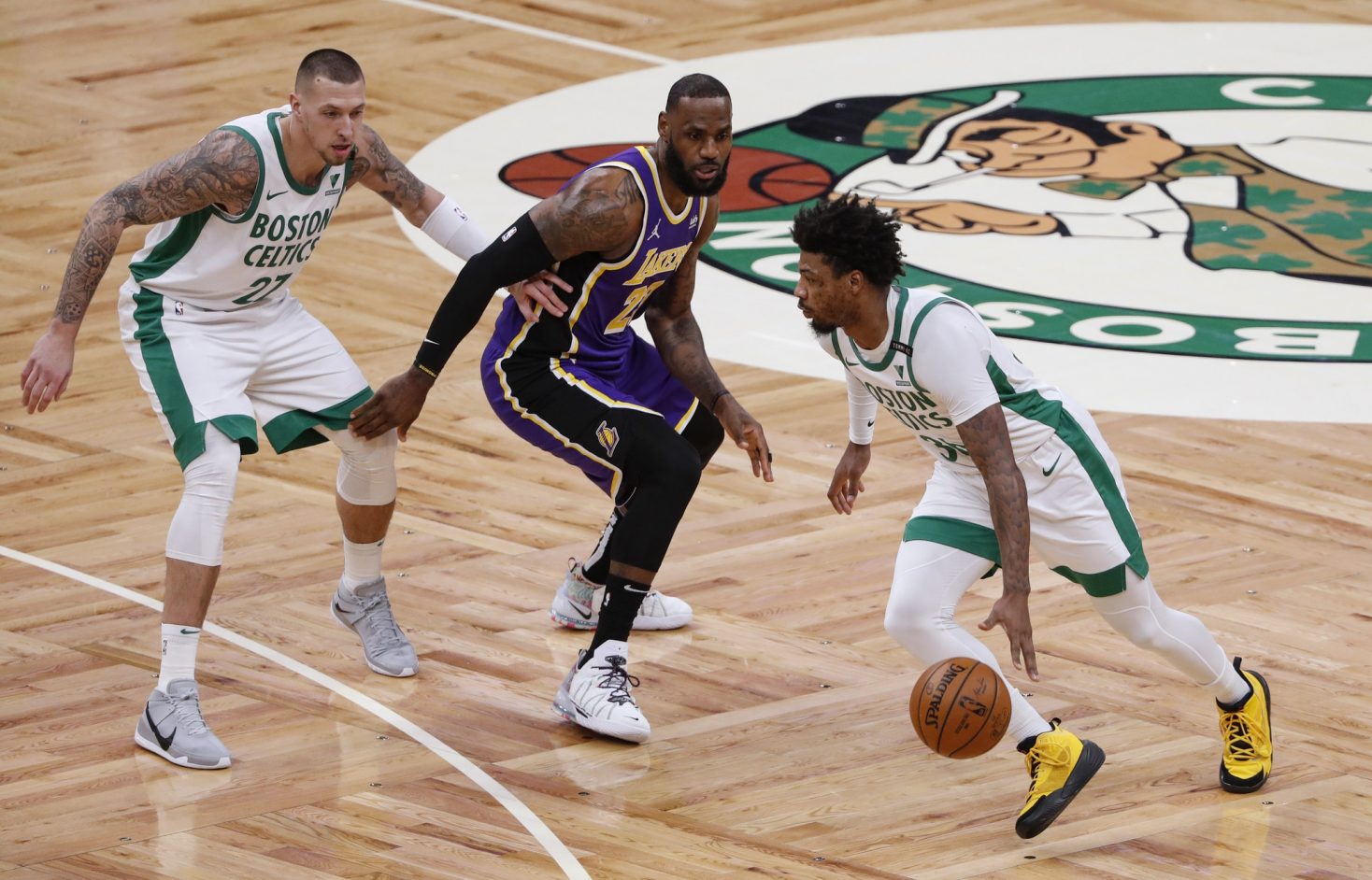 5 rational thoughts about a complicated Celtics loss to the Lakers

Last night’s game, and the aftermath to it on social media, was a wild whirlwind, made worse by the uncertainty over Marcus Smart’s calf injury (which turned out to be less bad than it looked). Let’s try and see through some of that in the clearer light of the morning (OK, early afternoon, whatever):

1. The Cs did play up to the challenge, all things considered.

Lost in the shuffle of it being a loss to the Lakers, a loss on national network TV, the Kemba Walker struggles (we’ll get to those) and everything else was how well-matched the teams were. Neither team was ever far behind the other. The number of points where they were near-identical is kinda wild:

2. The problems were flukes that happened at the worst possible time.

Those turnovers I mentioned? Well, 7 of them were in the fourth quarter, which is, uh, like, the worst possible time to be turning the ball over.

That was the one of the two main problems. Not that the Celtics played poorly, or didn’t try—neither of those things are true—but that small mistakes added up. Stars were as guilty of them as bench players: A rookie like Aaron Nesmith accidentally stepping out of bounds is “shrug, whatever;” Jayson Tatum blowing multiple passes not too long after throwing one of his career’s most spectacular passes is much more frustrating. Own-goals are even more so: Robert Williams had one in Q2 and Theis had another one trying to oppose Montrezl Harrell in Q4.

Those are the sort of errors you shouldn’t make when your margin of error is tiny, in a game against the defending champions, but they’re not indicative of serious problems. Jared Weiss at the Athletic broke down in detail how much the Cs defense improved from the Spurs game to this one; now they need to build on that momentum.

3. Is Kemba’s bad night a harbinger of serious decline?

Last night, Kemba Walker had one of his worst games as a Celtic and also a career-worst:

Tonight's game was the 2nd worst shooting night of Kemba's career. It's frustrating, but he'll be better

As Lederman points out, the two things can simultaneously be true. If he made even a single additional field goal—like that attempt at the end, a shot he’s generally capable of making—the Celtics win. If he’d made more shots elsewhere in the game, maybe the Cs aren’t in the position of having to make a buzzer-beater.

Those issues, along with the flukes, were what lost the game. It’s incredibly disappointing. Just like Walker’s injury-driven struggles in the playoffs were frustrating and disappointing. But…do we think this means his decline is beginning, or that he’s not right for this team? There were more than a few tweets to the effect of the following:

It will be a while before Kemba's poor shooting this season starts to really worry me, but his history against top-end teams with size is a different problem and one that even one game like this adds fuel to.

Jaylen & Tatum have outgrown the need for ball dominant PGs. A complimentary wing or big man would fit them a lot better

I’m inclined to answer both versions of the “decline” question with “no, not yet.” Walker wasn’t the first option on offense last season in most games but was still immensely productive and effective. He isn’t the first option now, doesn’t expect to be and—as his postgame comments show—is as frustrated by the difficulties he’s had as anyone else. Moreover, those difficulties are happening in his first few games back from injury recovery, and in the broader context of Literally The Weirdest Season Ever.

One take I saw that was reasonably nuanced:

Aight I'll keep going on about it – frankly, I only need one thing from Kemba Walker: a 38-40% 3pt shooter. That's it. If we can start two All-Stars, a DPOY, a 39% 3pt shooter, and Theis every game, we'll win. I don't care about anything else. We just need him to make those 3s.

The only caveat I’d add to that is Kemba still needs to be taking those shots, and shooting in general, at medium-high volume. Morphing him into J.J. Redick is not the answer just yet. (However, acquiring Redick for the bench, as the Celtics appear to be considering, might not be terrible—depending on the cost.)

Daniel Theis and Rob Williams both had productive nights last night, while also, as mentioned, making some confounding blunders (the own-goals and turnovers). Williams isn’t quite ready to start due to his penchant for mental mistakes, but Brad Stevens rolled the dice by playing him almost 20 minutes and it mostly worked on both ends of the floor. Theis has the stretch-shooting dimension and ironclad defensive instincts, but lacks the pure athleticism (and extra two inches in height) that Williams adds. This makes an interesting dynamic. (Also, the few moments they shared the floor weren’t a problem.)

Let’s end on a positive note. Jayson Tatum led all scorers across all teams with a 30-9-3-2 line last night and also did this:

There is no longer any question of ability, with him or Jaylen Brown (who scored 28 on even greater efficiency, alongside a rebound, 3 assists, a steal and a block). All that remains unanswered is where their ceilings are.