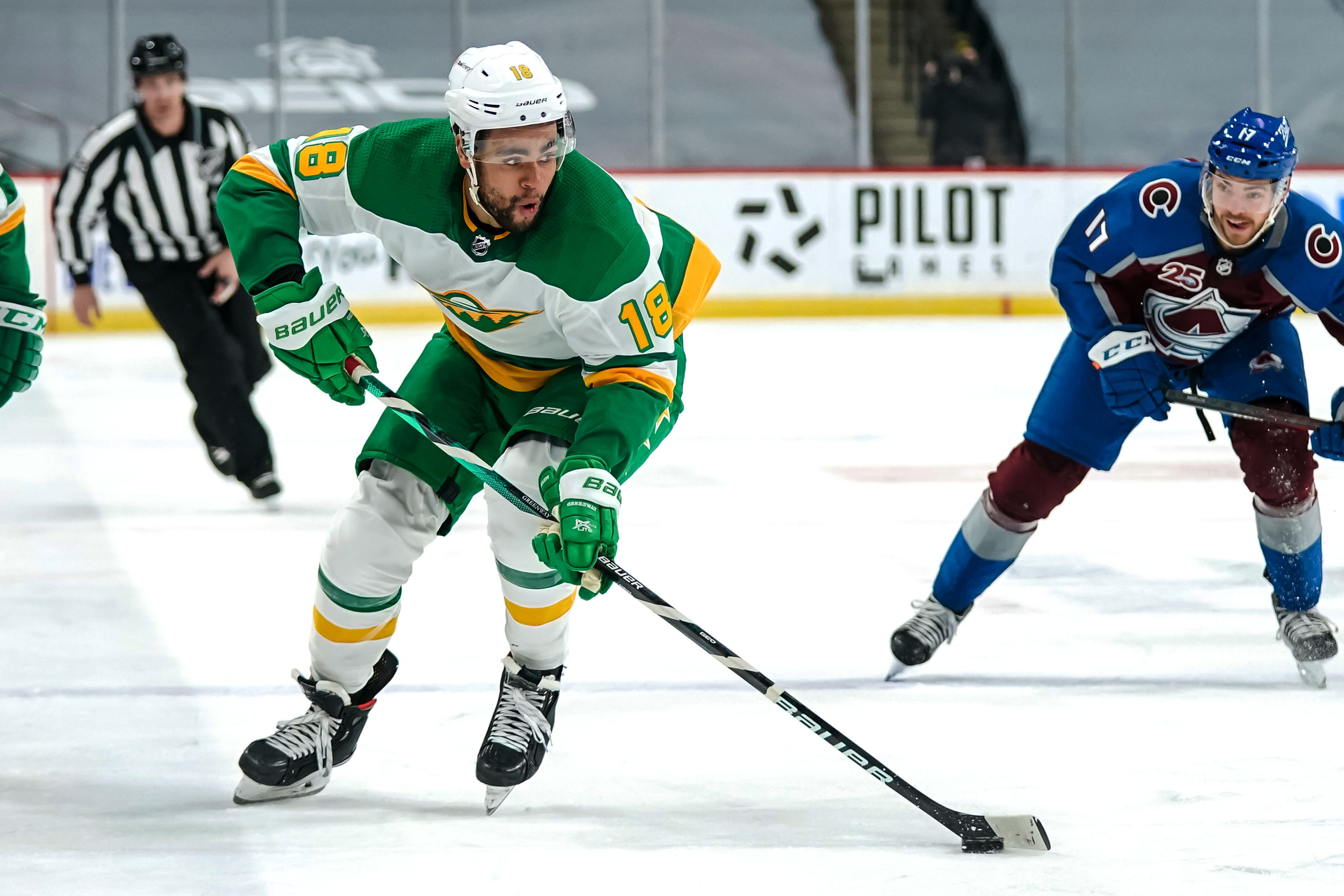 I remember my first NHL game, 1982 between the Minnesota North Stars and the gold and purple clad Los Angeles Kings.  I don’t remember the score, but I certainly remember being at Met Center and the multicolor seats and being there not only with my parents but my aunt, uncle and cousins too.  Seeing the Minnesota Wild in their Adidas Retro Reverse jerseys brought those memories back and seeing the green and gold as well as the shadow-style letters just pop brought a smile to my face.

It also appeared to help inspire a decimated Wild team to put their best foot forward with a better effort compared to what they had on Saturday evening.  The team seemed appeared to have more energy and were giving the Avalanche less time and space.  One player who was really working hard right from the drop of the puck was Jordan Greenway.  The rugged power forward was playing with a sense of urgency and initiative and it was no surprise he ended up with the 1st goal as he followed up his own shot and as the puck dribbled out towards him from Joel Eriksson Ek he wasted little time stuffing it home by Hunter Miska.

The Wild would take the lead early in the 2nd when Jared Spurgeon set up Victor Rask for a goal.  Yet, as good as the Wild were playing Colorado would remind Minnesota just how talented they are.  Enter Cale Makar who made a great move to fake out Greenway to move into the high slot before beating Cam Talbot with an against the grain wrist shot to tie it up at 2-2.

In the 3rd, the Avalanche would take back the lead early as Brandon Saad ripped a shot top corner by Talbot but Minnesota wouldn’t go away.  Kirill Kaprizov, as pesky as ever continued to work in the Colorado zone before setting up Rask in the high slot who fired a wrist of his own that found the twine for his 2nd goal of the game making it 3-3.  The game would go to overtime.

Overtime, did not last long, just 18 seconds as the Wild worked the puck into the Colorado end before sending a puck back to Jonas Brodin who stepped into a slap shot that blazed by Miska for the game winner.  It was a great split for a team that was missing 3 forwards and a top 4 defenseman going into this game.  The goal scorers were not your usual suspects, but it was good to see players like Rask and Brodin raise their game.  Now the team will head to Colorado to play two games in Denver.

Dumba gets put on Injured Reserve

When I am coaching football, one thing I remind the players is how you never really know how many plays you’re going to have in any given season so you might as well give it everything you have.  As much as you can prepare for the unexpected, injuries can derail a season in an instant.  On Saturday night, late in the game between Minnesota and Colorado, Wild defenseman Matt Dumba fell awkwardly, contorting in his knee in such a way that it was sure to cause some kind of damage.  Dumba was clearly in pain and had to be helped by the team’s medical staff to make it to the bench let alone down the hall and into the team’s locker room. 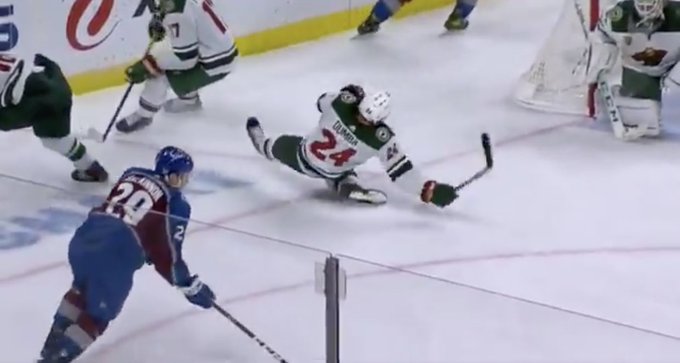 At times, you will see a situation like this where it looks bad and the athlete hobbles or makes it back with a slight limp giving you hope it was a minor injury.  But when no weight is place on it at all and two people had to provide their assistance to almost carry him off the ice you know its probably something rather severe.  I am sure the team will simply tell us its a ‘lower body’ injury and leave at that but it will probably mean the Wild will be without Dumba for the next few weeks if not months (or maybe even the season itself).

While that will hurt the team to lose its most dangerous offensive defenseman, it will also thwart any opportunity for the Wild to trade Dumba for the forseeable future.  And if the injury is truly serious it may permanently reduce Dumba’s trade value which would be disastrous for a club that probably was hoping to move him prior to the expansion draft this summer.  Being on the trading block is nothing new for Dumba, and other teams did call Wild General Manager Bill Guerin with trade offers for the talented defenseman but he described them as underwhelming.  That wasn’t an indictment on Dumba as much as it was the fact the team was in a place where everyone knew he was for sale so they were only going to offer the Wild rather milquetoast offers hoping the team would bite.

If Dumba’s injury is as bad is it looked, it may wish it had taken one of those deals.  Dumba is signed through the next two seasons after this one at $6 million per season on a team that is already carrying 3 other defensemen on deals in excess of $6 million dollars.  So as unfortunate as it may be for the Wild in the short-term, the long-term ramifications of this injury might be even worse.  For now, Dumba has been placed on injured reserve. 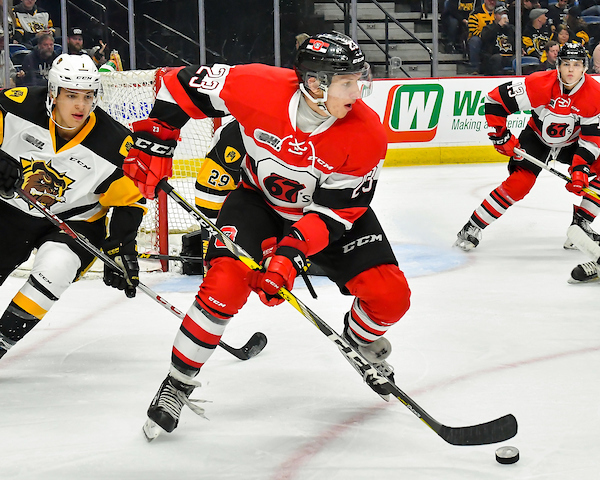 Since my last post-series report against the Sharks, I talked about the fact how little or nothing has been said about the condition of the team’s top selection from the 2020 NHL Entry Draft, Marco Rossi.  A lot has changed in the last 48 hours where the team announced he was returning to Austria to be with his family while he continues to deal with complications due to the Covid-19 he had contracted in November of 2020.

They went as far as revealing he has some heart related issues that was speculated by Sound the Foghorn‘s latest episode as myocarditis which is an inflammation of the heart muscle.  It is an issue that supposedly has a 6-week long (at least) recovery time.  However, the team also stated that there is no timetable for Rossi’s return and the Athletic‘s Michael Russo said on his most recent episode of Worst Seats in the House that he thinks it is highly unlikely the young center will play for the Wild this season.  Russo also seemed to wonder openly that if Rossi was still struggling with post-Covid issues, then why did he end up still playing for Team Austria at the World Junior Championships?

As I observed, he did not seem to have the same jump in his skates we saw from his junior highlights and makes one wonder if he was medically evaluated by Team Austria before they gave him the green light to go and play and did they risk permanently damaging his heart by doing so?  Its a good question, because people who have myocarditis are not supposed to do much other than rest and relax while the heart tries to recover.  So presumably, he’s returning home to Austria to do just that and after six weeks he’ll return to be Minnesota to be re-evaluated according to the Athletic‘s Michael Russo.  That means he won’t even be practicing or working out for the forseeable future which could prove costly in terms of his development.

I have a friend in the Netherlands who had Covid-19 early back in last March.  He’s still unable to work because of that exposure and he’s only 30 years old.  I really hope that isn’t the case with Rossi, but as know from my own experience with Covid-19 it can affect people very differently and there really is no way to tell how it will affect you until you have it.  Hopefully he can recover and have a normal life, let alone continue his promising hockey career.

Here is your weekend prospect report.  What did you think of the Wild’s home series against Colorado?  Tell us on Twitter @CreaseAndAssist or in the comment section below!

LW – Nick Swaney (Minnesota-Duluth, NCHC) ~ The former Lakeville South star continues to have a strong senior year for the Bulldogs as he had an assist on 4 shots in Minnesota-Duluth’s 2-1 win over Miami (OH) on Friday night.  On Saturday, he’d add another goal and a helper on 4 shots on goal as UMD rolled to series sweep with a win over the Redhawks.  Swaney has 7 goals, 20 points, 6 PIM’s and is +6 in 16 games.

LW – Vladislav Firstov (UConn, H-East) ~ The talented sophomore had a goal and an assist on 2 shots in UConn’s 6-1 drubbing of Merrimack.  He would add another assist on Saturday as the Huskies swept the Warriors with a 6-2 win.  Firstov has 3 goals, 10 points, no PIM’s and is +1 in 8 games.

G – Filip Lindberg (UMass, H-East) ~ The Espoo, Finland-native stopped a 16 shots he faced to give the Minutemen a 5-0 win over in-state rival UMass-Lowell.  He followed it up again by making 28 saves in a 2-1 sweep over the Riverhawks on Saturday.  Lindberg has a 2-1-3 record, with a 1.45 goal against average, .943 save percentage and two shutouts on the season.

D – Brennan Menell (Dinamo Minsk, KHL) ~ The ‘Woodbury Workhorse’ continued to pile up the points with a secondary assist and 3 shots on goal in Dinamo Minsk’s 4-2 loss to CSKA Moscow.  Menell has 5 goals, 30 points, 20 PIM’s and is a +6 in 39 games.