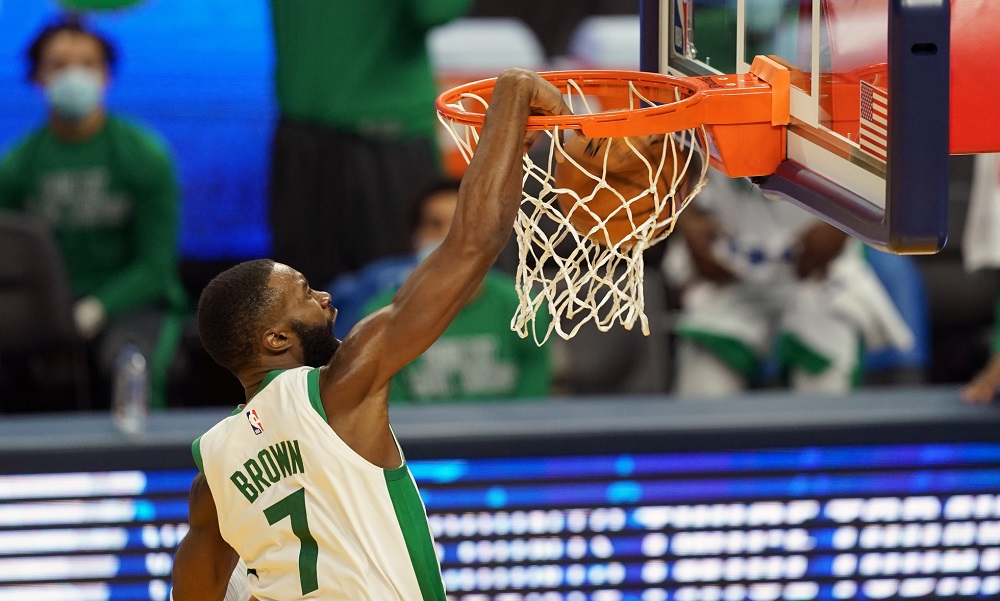 There’s nothing like a five-game western trip – especially without injured Marcus Smart – to help define your season, but last night the Celtics began their challenge on the right foot with a 111-107 victory at Golden State. It wasn’t perfect, but a win is a win after two straight close losses. Quick recap:

Moving on to the 5 thoughts:

Curry began the night like he was about to set some records, but the Celtics managed to keep him from going supernova, He still tallied 21 points after the first quarter, because he’s Steph Friggin’ Curry. Brad Stevens explained in postgame how they prevented a Chef Curry takeover. From the Globe:

“Well we didn’t do what we had set out to do at the start of game,” Celtics coach Brad Stevens said. “We weren’t up, we weren’t there on the catch, we weren’t making it hard. So after [Curry] came back for his second stint in the first half we were much better. Obviously mixed in a lot more zone, which is kind of counter-intuitive with a guy like that but it allows you to stay on top of those screens and just keep guards out and guard the three-point line. We did a better job when we were in man of just having a little bit more urgency than we had at the start of the game on him.”

The Celtics responded like a team is supposed to respond when a Hall of Famer dazzles in the early going. They made adjustments. They covered Curry with two players. In several sequences, a Celtic player stuck with Curry even though the ball was 40 feet away in the other corner.

The philosophy: don’t help off him for anybody, not even if it means giving up a 2-point basket because 2 is less than 3.

Brad’s rotations are weird. Versus the Lakers, Rob Williams was impressive and Grant Williams didn’t even play. Against the Warriors, Rob got just 8 minutes, Grant 27. It must be difficult not to know what will happen from one night to the next.

To his credit, Grant was a perfect 4 of 4 from the field, including 3 treys. His putback hoop, followed by his block of an Oubre dunk attempt, lit the fuse for the late run that decided the game. Grant also made two from the line in the final minute (although, to be fair, he missed two others with 12 seconds left).

The main thing is that Grant showed up and provided a spark off the bench, which is no sure thing these days. Chuck had more to say about Grant in the Morning Dump.

The Celtics had just 16 assists on 39 baskets, compared to 30 assists on 38 makes for Golden State. Boston made up for that by dominating the boards, 51-36, including a 12-6 offensive rebound advantage. That led to a 16-9 margin in second-chance points.

Most of that damage occurred in the second half, which made sense. Due to injuries, the Warriors played those 24 minutes without any player taller than 6-foot-7.

Here are two highlights that illustrate just how lucky we are to be watching Jayson and Jaylen make the leap into stardom. Enjoy.

Tatum starting the second half with some heat pic.twitter.com/HTCTWE76CH