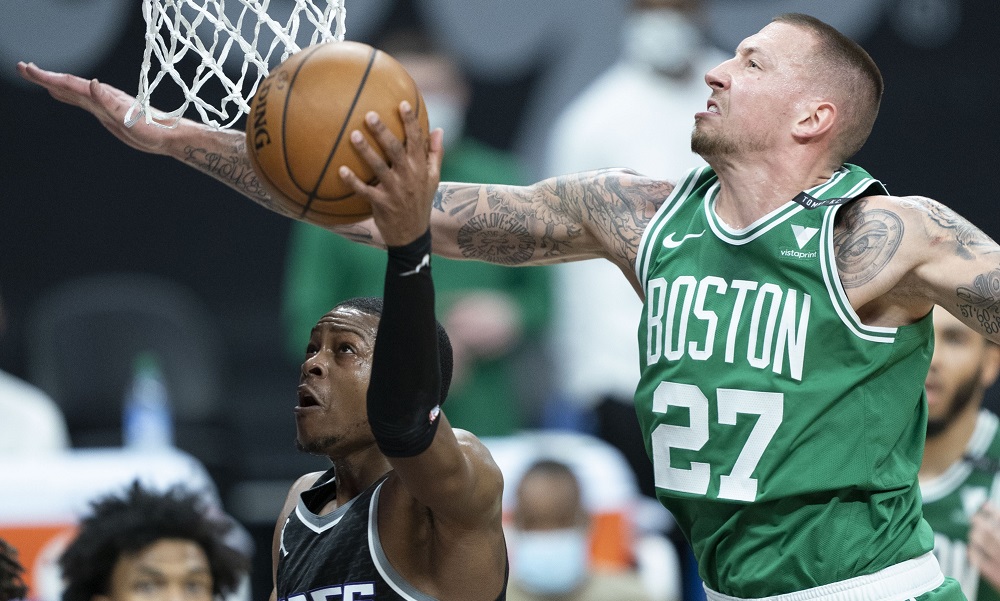 The Celtics were severely shorthanded at point guard last night, missing the resting Kemba Walker (second night of BTB) and the injured Marcus Smart and Payton Pritchard. Nevertheless, they were in great position for a win in Sacramento, with double-digit leads in both halves.

And yet, continuing a recent troubling pattern, they let the Kings snatch the W, 116-111. The Celtics’ last four games have been decided by 5 points or fewer. They lost three of them by being outscored in the fourth quarter. In the one win, at Golden State on Tuesday, the Celts managed to hold on despite scoring just 5 free throws over the last four minutes.

Last night, the Cs repeatedly squandered leads. In the second quarter, they led the Kings by 10 with about 10 minutes to play, but by halftime they trailed by one point. By the middle of the third, the Celts had rebuilt the lead to 11, but their margin was down to one at the period’s end. Midway through the fourth, Boston was up, 96-91, but once again couldn’t hang on.

The Celtics were led by Jayson Tatum’s 27 points (more on him below), while Jaylen Brown had 21. Tristan Thompson had his best game as a Celtic (again, more below). Rob Williams brought energy in 19 minutes off the bench, with 4 of 4 shooting, 9 points, 8 rebounds, 2 assists, 2 steals and a block.

The Kings were led by De’Aaron Fox, who scored half of his 26 points in the fourth quarter. He added 11 assists. Also notable: Harrison Barnes (24 points and 6 assists, an encouraging showing for a potential TPE target) and rookie Tyrese Haliburton (dropped 21 – double his average – while hitting 5 threes).

On to the rational thoughts.

It was an up-and-down night for the young star. Lacking point guards, Jayson did a lot of the playmaking and just missed a triple-double: 9 rebounds and 10 assists to go with his 27 points. But JT was only 2 of 10 from the arc. He also went scoreless for the first 16:40 of the second half. The great ones don’t stay down long, however; Tatum ripped off 13 points in the final 7:20.

Trailing 114-111 with 7.4 seconds left, Grant Williams intentionally missed a free throw, grabbed the carom, and found Tatum in the corner. Defended closely, Tatum had time to swing it to a wide-open Jaylen to his left, but instead launched a three that was way off. Wonder if he’d like that one back.

Maybe, after missing training camp, TT has gotten in shape now, because he stood out for the second straight night. In 22 minutes at Sacramento, Thompson was 7 for 9 for a season-high 17 points. He also grabbed 10 rebounds.

Then he didn’t play in the fourth quarter until the final seconds.

Brad Stevens on Tristan Thompson not getting back in: "They were small a lot of that time. I thought Rob was playing well during his stint. Then they were spreading us out more, so we went back to Theis late."

To be fair, Daniel Theis and Timelord both made steady contributions all night and earned their playing time. Still, if Thompson is having his best game, how about riding him? Brad’s personnel decisions are being second-guessed more and more, and this won’t change that.

Kemba and Payton, please hurry back and be well.

Gritty play of the night

Tremont did have 5 assists of his own, none better than here as he channels Marcus Smart.

Tremont Waters on the ground and still throwing dimes. pic.twitter.com/fezvEeETaL

Missed call of the night

Just about everyone watching thought this was goaltending – except the three refs.

Instead, Jaylen went to the line, missed the first, made the second. The non-call could not be challenged. Some would say those two points wouldn’t have changed the outcome, but they might’ve changed how the final moments played out. We’ll never know.