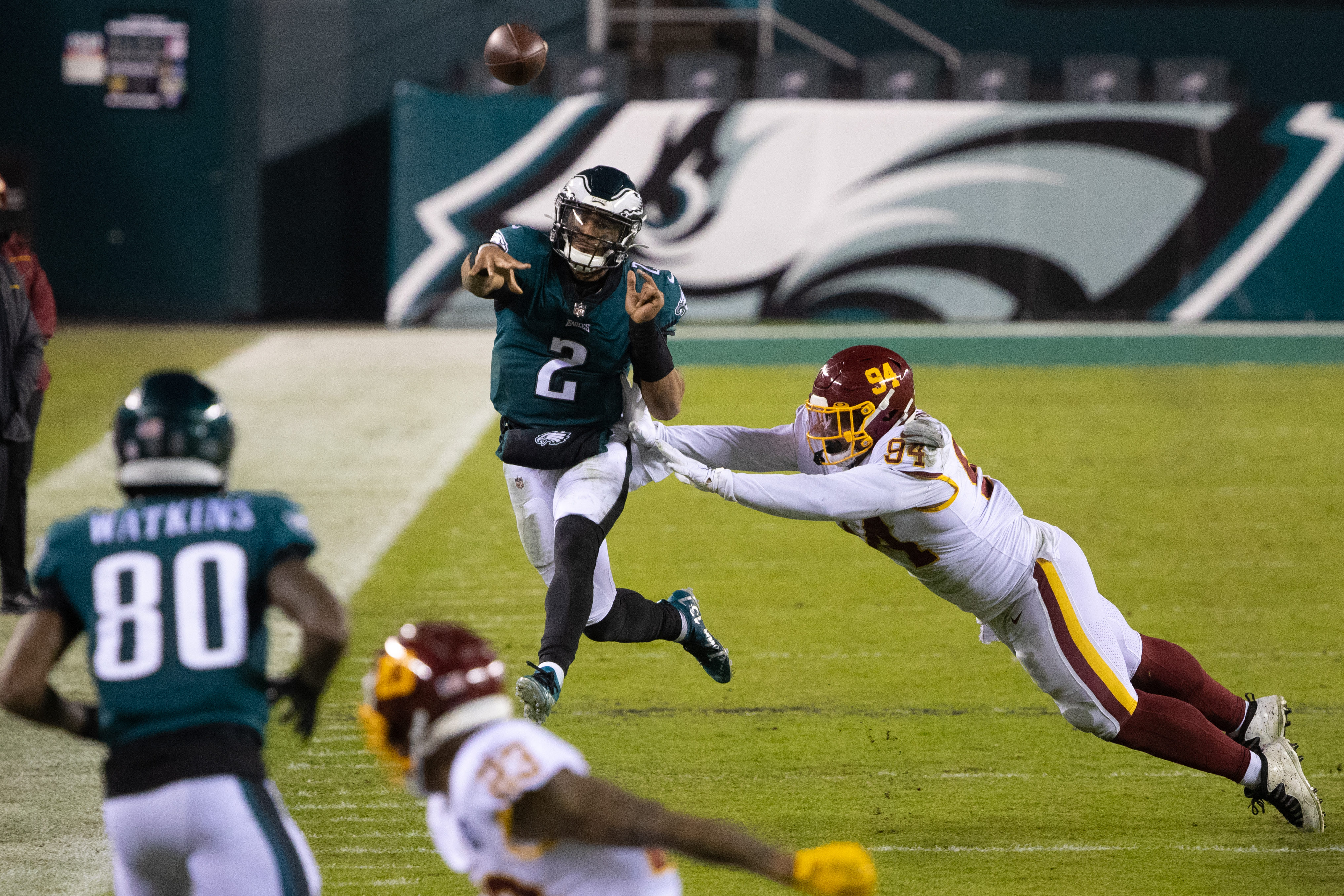 Hope you are enjoying Super Bowl week wherever you are right now… it’s a week to appreciate the most obvious achievement of the NFL this past season, and that was to actually complete a full season under COVID-19 restrictions.

For Eagles fans it’s a bittersweet realization that their 4-11-1 team never had a chance to remotely fulfill its Gold Standard ambitions.

That ship has sailed.

No excuses here, no second-guessing allowed…

The heir to the Gold Standard at quarterback for the Eagles has apparently been deposed.  Ginger Jesus (or Ginger Baker if you are a Cream aficionado) is now just Ginger.

When the Philadelphia Eagles hired Nick Sirianni as their new head coach, most understandably saw the decision — at least partially — as a step toward getting quarterback Carson Wentz back on track. Sirianni, after all, is best known as an understudy of former Eagles offensive coordinator Frank Reich, one of Wentz’s top mentors during his 2017 MVP candidacy. But just because Sirianni is in town doesn’t mean Wentz wants to stay in Philadelphia. According to ESPN’s Adam Schefter, the Eagles’ former starter would prefer a fresh start elsewhere in 2021, even if his current team is not inclined to trade him.

Speaking with John Kincade on 97.5 The Fanatic Wednesday, Schefter suggested Wentz’s silence this offseason — the QB has notably refrained from welcoming Sirianni or commenting on ex-coach Doug Pederson’s dismissal — “tells you something.” Specifically, he added, reiterating previous ESPN reports, Wentz remains hopeful of a clean break from an organization that oversaw his stark regression in 2020.

That’s a notion far removed from the Gold Standard, which once proclaimed any good player worth his salt would sell his soul to play for the Eagles, even if it meant being a walk-on.

“(He) wants to leave the franchise,” Schefter said. “That’s why (a) trade still is in play. This is all real. None of this is made up.”

The issue, Schefter explained, is that the Eagles are “not gonna trade him unless they get back fair value,” which he estimated, in their eyes, would be a first-round draft pick, at the minimum.

“They will listen,” he said. “Absolutely listen. And if a team makes the right offer, there will be a trade that will be made. But if a team doesn’t make the right offer, I think they’ll be open to bringing him back and having him compete in camp with Jalen Hurts. To me, it could go either way … Just because he would like to be moved doesn’t mean he will be. If I had to guess, I would guess he is traded … But again, they’re not looking to get rid of him. They’re not.”

That’s because the Eagles still believe they hold the key to the Gold Standard.  It’s a metric which implies their system can restore a damaged piece of gold jewelry.

In 2003, Eagles owner Jeffery Lurie told reporters he felt his Philadelphia Eagles were the NFL’s “Gold Standard” — a model that other franchises wished to emulate.

When he hired Reid’s protege Doug Pederson in 2016, Lurie appeared desperate to rekindle the early-2000s success that first inspired the “Gold Standard’ proclamation.

However, Pederson’s coaching debut was plagued by inexperience and judgment errors. His penchant for risk-taking was portrayed as reckless by his critics. The Eagles started the year 3-0, then lost nine of their next 11 games and finished 7-9. Philadelphia ended 2016 with more questions regarding their future than answers.

Debates about whether they chose the right man to groom their QB of the future raged on, as Lurie preached cautious optimism before bestowing the title of franchise QB upon Wentz.

Yet, Lurie was less bombastic than he had been in the early days, as he analyzed that 2016 team at season’s end. He showed a deeper thought process for the way he wanted his organization and the individuals within it to function.

To some, Lurie was simply spewing corporate motivational slogans. But in retrospect, when you contrast his remarks after dismissing Kelly to those he made in 1998 after firing Ray Rhodes, his growth as an NFL owner is undeniable.

Lurie had been openly critical of Rhodes’ decision-making, telling Philadelphia Magazine the thing holding the Eagles back was “a consistent lack of top-notch talent evaluation.”

Lurie would admit to failing Rhodes by not hiring a strong personnel man to remove the burden of player evaluation from the already monstrous duties of head coaching.

He realized that when decision makers are overwhelmed, they “tend to make (personnel) decisions based on personalities.” If only Lurie had exercised this wisdom before giving Chip Kelly the final say in personnel decisions.

Now compare Rhodes’ situation to the one Doug Pederson stepped into, with Howie Roseman in control of the personnel department. Assistant coaches Dave Fipp, Jeff Stoutland, Duce Staley and Cory Undlin were retained from Kelly’s staff, bringing stability and familiarity with much of the team’s personnel.

Entering 2017, many wondered how short Pederson’s leash was and whether the owner would tolerate a step backward — either in the team’s record or in Wentz’s development.

The question never became an issue. Pederson and Wentz blossomed in 2017. And when Wentz went down, Pederson exceeded the wildest expectations anyone could have had for his performance.

Suddenly, Lurie’s franchise was truly the envy of the league after vanquishing the New England Patriots — the team Lurie grew up rooting for and was outbid for prior to buying the Eagles. Teams were scrambling to fill their own vacancies with Philadelphia’s coaches and executives.

Three years later, the Gold Standard is a victim of spirit murder. It’s a fickle finger of fate at work, to be sure, but there is also the complacency factor.  It cuts across the organization.  The Gold Standard is neither.  Every season is a new opportunity to fail.  Once you believe you are the Gold Standard, you are destined for hard times.  We should have learned this from the end of the Andy Reid era in Philly.