The Green Bay Packers have been a big part of Super Bowl history from the very start. Vince Lombardi’s teams won the first two Super Bowl games and since then, the Pack has won two more.

There have been many memorable moments for the Packers in football’s biggest game. With that in mind, here is a look at the Packers top 10 plays in Super Bowl history. These are moments that had a big impact on the game and remain a part of Packers Super Bowl lore.

The moments are listed in chronological order. Feel free to comment and mention other moments you feel may belong on this list and why.

The Packers scored the first touchdown in Super Bowl history midway through the first quarter of Super Bowl I. Bart Starr threw to Max McGee. The ball was behind the Packers receiver but he reached back and grabbed the ball out of midair with one hand and ran into the end zone.

McGee didn’t expect to play and was out on the town until at least 6 AM the night before the game. But when Boyd Dowler was injured early in the contest, McGee stepped in and delivered a clutch performance. The wily veteran only caught four passes all season, but against the Chiefs, he caught seven passes for 138 yards and two touchdown catches.

The Packers were heavy favorites in Super Bowl I but at the half, the Chiefs were hanging around and Green Bay led 14-10. The Chiefs received the second half kickoff and faced a third-and-five at their own 49.

The Green Bay defense got pressure on quarterback Len Dawson and Hall of Fame safety Willie Wood picked off the pass and ran it back 50 yards to the Kansas City five. 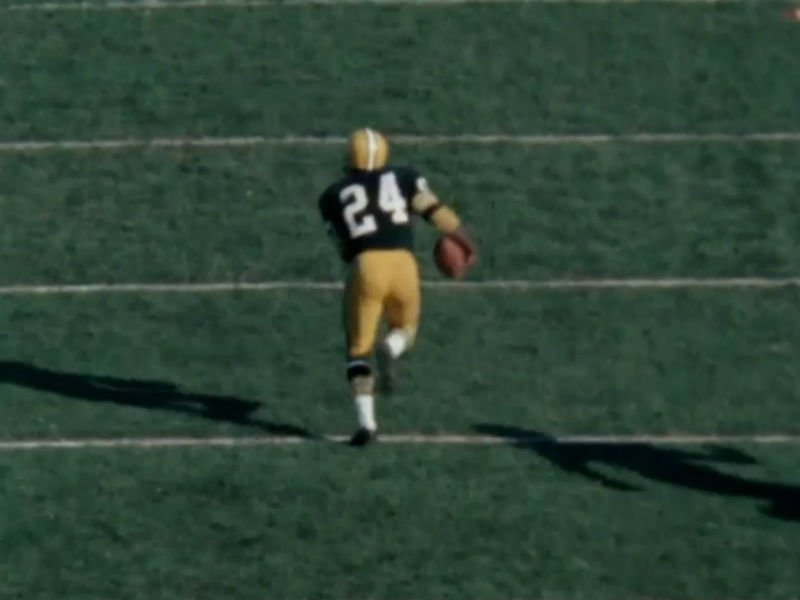 One play later, Elijah Pitts scored on a five-yard run and the Packers led 21-10. They never looked back and won the game 35-10. Wood’s interception was the turning point and led to the Packers second half dominance.

The Packers scored on both their first two drives in Super Bowl II, but the Raiders defense held them to field goals and the score was just 6-0 when the Packers got the ball back at their own 38 with a little more than 11 minutes left in the second quarter.

On first and 10, Starr found Boyd Dowler who got behind the Raiders secondary and scored on a 62-yard touchdown pass. It was the longest touchdown pass in Super Bowl history up till that time.

The Packers led 13-0 and never trailed en route to their second straight Super Bowl win. This was Vince Lombardi’s last game as Packers head coach and he left the field with his third straight championship.

The Packers had a 26-7 lead early in the fourth quarter when the Raiders had the ball near midfield. Quarterback Daryle Lamonica tried to find Fred Biletnikoff downfield. Packers cornerback Herb Adderley intercepted it and ran it back 60 yards for the touchdown that gave the Pack a 33-7 advantage.

This was the first defensive touchdown in Super Bowl history. Adderley played in four of the first six Super Bowls and won three of them, two with the Packers and one with the Dallas Cowboys. He was inducted into the Pro Football Hall of Fame in 1980.

The Packers first possession of Super Bowl XXXI started at their own 45. After a one-yard run by Edgar Bennett, Brett Favre approached the line of scrimmage and called an audible for a long pass. He found Andre Rison deep for a 54-yard touchdown that gave the Packers a quick 7-0 lead. 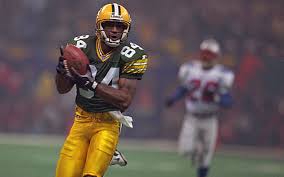 Rison lined up on the wrong side of the formation but Favre found him anyway. The emotional quarterback from Kiln, Mississippi, completed his first pass in a Super Bowl for a long touchdown pass. The Packers were off to a fast start en route to a 35-21 win.

The Packers had a seemingly comfortable 27-14 lead in the third quarter of Super Bowl XXXI when Curtis Martin scored on an 18-yard run with 3:58 left in the third quarter to make it a 27-21 game. The lead was down to one score and New England had the momentum working in their favor.

But when Adam Vinatieri kicked off to the one yard line, Desmond Howard took the kick and followed his wedge down the middle of the field. Howard ran the kickoff back 99 yards for a touchdown to retore the Packers lead. After a two-point conversion, the Packers led 35-21 and even though there was still more than a quarter left, everybody knew the game was over.

The Packers won their first Super Bowl in 29 years and Howard was named the game’s MVP, making him the first return specialist to win that honor.

The Packers trailed the Denver Broncos 24-17 in their bid to win a second straight Super Bowl late in the third quarter when the Packers got the ball back. Favre mixed his passes, throwing twice to Antonio Freeman and once to Robert Brooks to move the ball down the field. 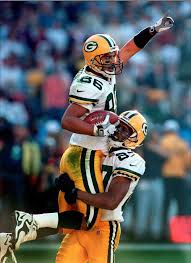 This was the only Super Bowl the Packers lost, falling short 31-24 when Favre’s last minute comeback attempt fell 31 yards short.

On the first Steelers play from scrimmage after the score, Ben Roethlisberger looked for Mike Wallace, but pressure by Howard Green forced a wobbly pass and Nick Collins intercepted it and zig-zagged his way into the end zone for a 37-yard touchdown.

The Packers had a quick 14-0 lead which they never relinquished on their way to a 31-25 victory.

The Packers once held a 21-3 lead in Super Bowl XLV but the Steelers whittled it down to 21-17 as the fourth quarter got under way.

On the sideline, linebackers coach Kevin Greene told Packers OLB Clay Matthews “It is time” to make a big play. Matthews delivered, forcing Steelers running back Rashard Mendenhall to fumble. Desmond Bishop scooped up the ball and the Packers were back in business.

Rodgers led the Packers on an eight-play, 55-yard scoring drive that culminated with an eight-yard touchdown pass to Greg Jennings and the Packers lead was 28-17.

The Packers were clinging to a 28-25 lead midway through the fourth quarter after Pittsburgh scored to make it a one-score game. Green Bay faced a third-and-10 at their own 25. Green Bay needed to keep the ball and regain control of the game.

Rodgers went back to pass and found Greg Jennings deep down the middle for 31 yards to the Steelers 44. They drive was alive and eventually resulted in a 23-yard field goal by Mason Crosby with 2:10 left in the game. 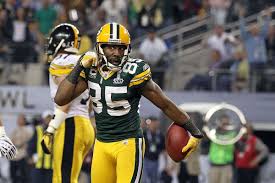 The Packers defense held and Green Bay walked away with a 31-25 win to clinch their fourth Super Bowl title.