5 rational thoughts about an impressive Celtics win over the Clippers 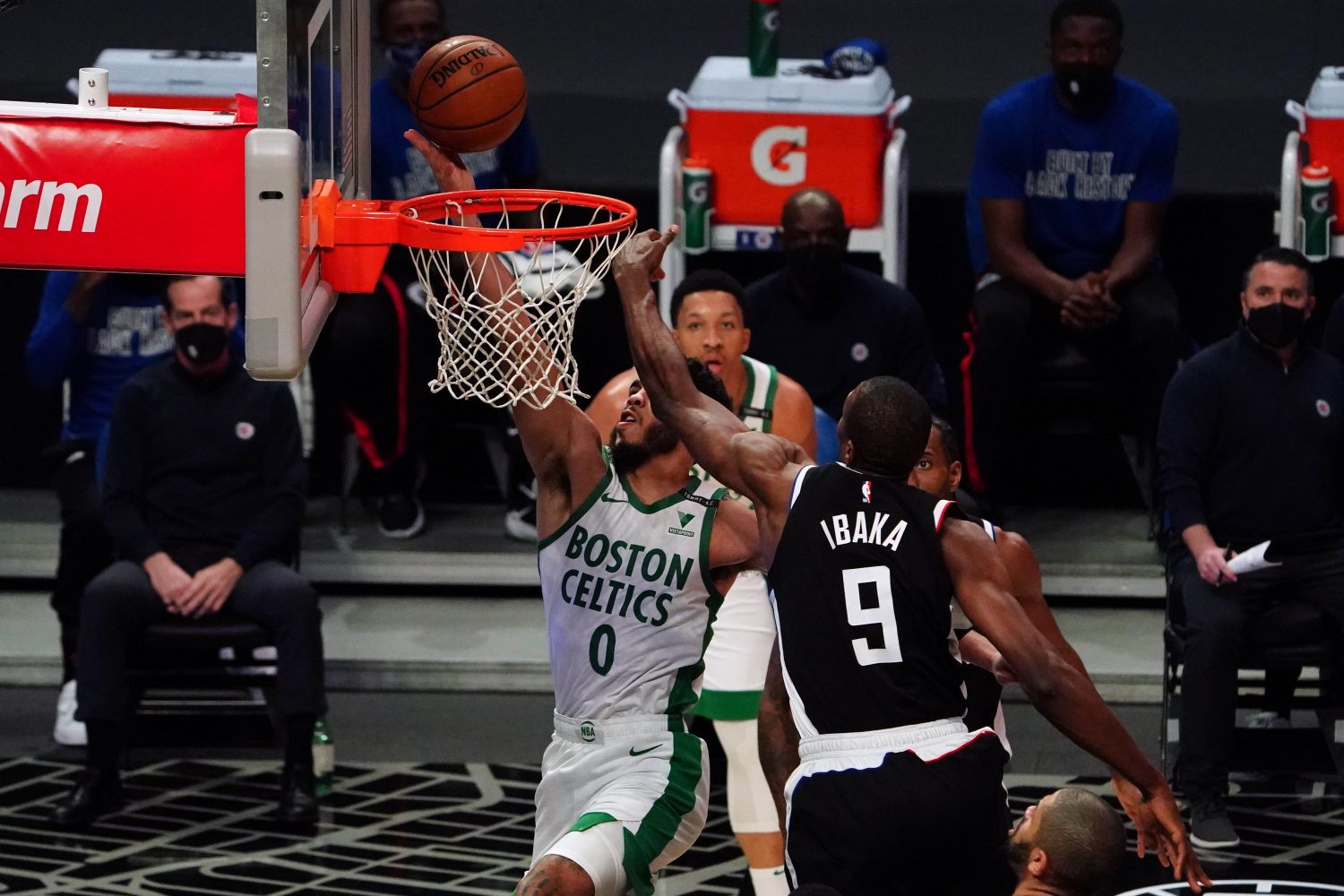 5 rational thoughts about an impressive Celtics win over the Clippers

What a game. What a win. Didn’t look like it was gonna happen for…more than a minute. But it did happen. Let’s look at some of the major factors:

This game’s first quarter was among the worst this year’s Celtics have produced. It was their weakest stretch of the game and they began improving from there—first slowly, then suddenly—but suffice to say I was not optimistic. When they were down 16 at one point I was starting to think about what I’d complain about in this very post. The offense was about as stagnant as I’ve ever seen in the Brad Stevens era, with only Jayson Tatum (and, in Q2, Carsen Edwards) seeming like they had anything to offer as scorers. They were slaughtered on the boards and leaving the perimeter wide open for the league’s best corner-shooting team.

Halfway through the third quarter, the dynamic had switched entirely: The Celtics never got as far up as the Clippers did in their dominant half, but they looked like the markedly superior team in every category except rebounding. (Given that going small is what helped turn things around for Boston, it’s easy to forgive them for punting on the boards in this situation.) Even a final surge in Q4 from the mostly-bad-this-year Lou Williams and the expected superstar whistle for Kawhi Leonard all game (plus, to be fair, the whole Kawhi being a basketball genius thing) didn’t beat back the Cs second-half attack and persistence.

Folks, would you believe that the Celtics won this game because Jayson Tatum arguably looked like the best player on the court? Shocking, I know. (No, he’s not better than Kawhi overall, but he was just a step ahead of the Clippers superstar tonight, and that made all the difference.) Ending the night with 34-7-2 and 4 steals, Tatum gave Boston momentum when no one else could, and remained the catalyst in the second half when the whole team was firing on all cylinders.

Kemba Walker, less than a week removed from one of his worst performances ever, fully resembled the Kemba we know with a 24-1-4-1-1 line on relatively efficient shooting. His midrange game and cutting abilities were on prominent display in the second half, and he had a run of exceptional playmaking in Q3 that helped get the Cs to the lead they’d hold for the remainder of the game.

Plenty of Celtics fans—including me—have been sour on Edwards for all of this season and much of the last one. He hasn’t seen the floor often and has looked atrocious against every team but Cleveland. I don’t think he necessarily is atrocious, and Stevens’ persistent skepticism about young players hasn’t helped him much, but looking at his game log isn’t encouraging.

Edwards got early tick due to the rail-thin Boston guard rotation, and immediately took advantage of Los Angeles not knowing a damn thing about him to can three consecutive triples when they left him wide open. He didn’t keep up that offensive pace the whole game, earning 7 more points after those first 9, but he didn’t have to: Stevens trusted him to stay on the court for 29 minutes because he was contributing on both ends.

4. The brawn of the big men

When this game started with its “triple-big” lineup—Grant Williams, Daniel Theis and Tristan Thompson complementing the Tatum-Walker backcourt—the returns weren’t promising. None of them looked good to start, but Theis was especially out of place, yanked quickly after about 4 minutes and only given about 5 more later on. (In fairness, injury may have been an issue, as the team announced he wouldn’t return in the second half due to knee soreness.) Robert Williams showed more spark off the bench than any of the starting bigs did in the first half.

By the second half, they’d changed their tune: Grant started hitting his shots, making the right moves on defense and throwing in some playmaking to boot. Thompson woke up offensively to great effect, keeping up his streak (in the last few games) of looking more like the player the Celtics expected him to be when they signed him. Semi Ojeleye put in a ton of defensive effort that really paid off in game (if not on the stat sheet). Ivica Zubac knocked the Boston bigs about a bit early in Q4, but other than that, they were a considerable force in the most critical stretches of the game.

As stated up front, most of that first half was pretty wretched. Just about everyone except Tatum contributed to that mess, even if you can attribute it in no small part to the absences of Jaylen Brown and Marcus Smart.

But the truest rough spot in the game was Jeff Teague, who, unlike Tristan Thompson, is not starting to look like the player the Celtics thought they’d get upon signing him. And I say this fully aware that everyone expects far less of Teague than of Thompson.

All the Cs need is for him to hit wide-open threes (which he couldn’t last night, missing all three of them alongside his only other FG attempt) and run the second unit (which he can as a passer…sort of? sometimes?). Teague didn’t jeopardize the game last night, but he’s not doing himself any favors.