RECAP 11: Standing in the Storm. Pens Break Down Late, Fall 4-3 to Islanders

RECAP 11: Standing in the Storm. Pens Break Down Late, Fall 4-3 to Islanders 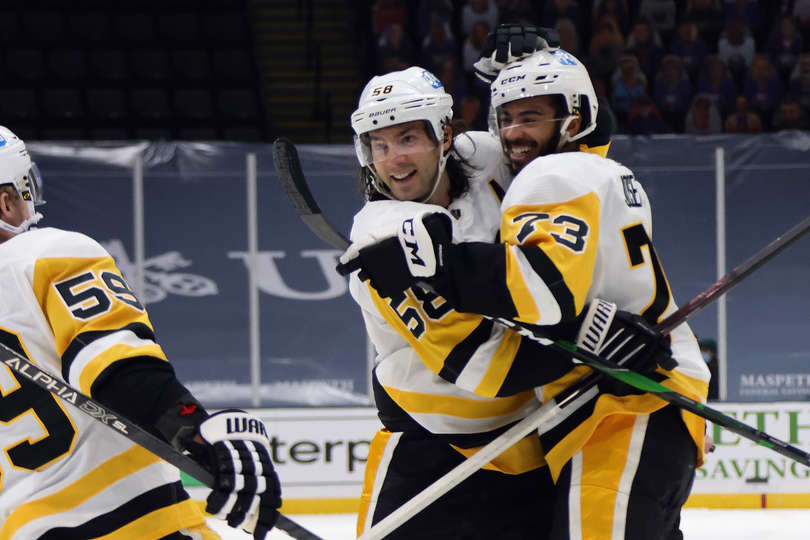 UNIONDALE, NEW YORK – FEBRUARY 06: Pierre-Olivier Joseph #73 of the Pittsburgh Penguins (R) celebrates his first NHL goal at 13:43 of the first period against the New York Islanders and is joined by Kris Letang #58 (L) at the Nassau Coliseum on February 06, 2021 in Uniondale, New York. (Photo by Bruce Bennett/Getty Images)

Let’s get one thing out of the way: this was one of the better 60 minute efforts the Penguins have had this season.

But you wouldn’t be alone if you realized that it was some mental errors that were their undoing…again.

Kris Letang had some good plays, but was culpable on the 3rd Islanders goal.

Jarry had a great second period that really kept the Penguins within striking distance, but he found himself a little too deep on the first Eberle goal, gave up a bit of a tough rebound on Eberle’s second, and let the puck squeak through him on the game winner.  Nothing about his second period will undo that.

So while we got probably 55 very good minutes of Penguins play, it was the compounding mistakes that ended up in the back of their net just about every single time they made a mistake.

A lot of nights, you probably get away with that.  Maybe your goalie comes up with a save, like Jarry did in the 2nd.  Maybe your opponent gets bit by the bad PDO bug.

But this simply was not one of those nights.

After injury and COVID concerns evaporated for Matheson, Letang, and Marino with the extra few days off, all 3 were back on the blueline for a still injury-riddled Penguins squad, now with just one righty playing on his off side!  No changes up front, while Jarry got the start over DeSmith this time out.

Welcome back to the lineup, Letang and Matheson! pic.twitter.com/iMxfH2TzXi

If you were tuning into this game expecting things to happen, you would’ve been better served tuning in to literally anything else because every single second of the first period was your typical Islanders-Penguins game.

Pens got about 2 quality looks that Varlamov turned aside.  And everything else was just sticks and bodies in lanes.

Oh and Jordan Eberle was threatening to just be a dick and his standard dickhead Eberle goal.

He did just that about halfway through the period.

By my count, this was the 3rd time Eberle had a clean look in the first frame on Jarry.

The Penguins initial did a decent job cleaning up their own zone and it was O’Connor skating the puck out of danger.  But he gets caught from behind here and turns the puck over in front of the attacking blue line, catching his team trying to transition.

Dal Colle and Nelson here team up to suck Ruhwedel in, isolating Ceci while he’s keeping an eye on Eberle.

On one hand, you can see what Ceci is thinking here: Eberle is on his backhand and, with Dal Colle providing support in the soft area between the blue line and the puck, so Ceci shadows a bit towards taking that pass away.

If Eberle drops it, Dal Colle has a clear lane to walk at least into the mid-slot and get a clean shot away.  That has to be considered more dangerous than a backhand shot from in tight.

On the other hand, Eberle has the skill to go backhand shelf from there and did just that with the space provided.  No win situation for Ceci after being left on an island by Ruhwedel pinching over and not winning the puck.

But about 3 minutes later, the Penguins would buck the traditional Islanders trend against them by actually scoring a got tam goal to tie things up.

Pens and POJ got themselves a controlled breakout and goes straight at the Islanders neutral zone 2-3 trap, attacking right at both forwards and releasing the puck to Guentzel at the absolute right time.

With a lot of young players, you’d expect them to just stop after making that pass, but POJ ain’t like most young players and jumped right through the gap given to him and gets in to support Guentzel on the zone entry.  Guentzel pulls Andy Greene over, knowing that POJ is coming late.

You better believe he asked permission

But just when you thought this wasn’t going to be your typical Islanders game, Jordan Eberle showed back up to remind you that he 1) is a dickhead Penguin killer and B) is going to kill some Penguins.

Once again, his line got the bounces in the neutral zone, keeping the puck going north despite never actually truly having possession of it.

It was Eberle himself that eventually got control of it, gaining entry into the zone before turning it into a live grenade drill.  Again, Dal Colle makes the play here with Zucker hounding him and Matheson pinching, but neither (nor Marino) could win the puck before Brock Nelson could get it towards the net.

Eberle, after his zone entry, ghosts his way straight to the net when Matheson stepped up on Dal Colle, redirecting Nelson’s shot and slipping the rebound home.

Second period opened with McCann not coming out and then some 4v4 action with Marino going off for interference and Clutterbuck getting called for holding.  Crosby almost did some Crosby shit with the open ice, but couldn’t find a way behind Varlamov.

Somewhere midway though, Jarry made some huge save on Bailey to keep the Penguins within a goal.  One of those TIMELY SAVES we love to shout about, don’t we folks?

Everything else was pretty tight checking.  Crosby’s line threatened, Jarry made another big save, but just when it looked like the Islanders were going to hold the lead through two, it was the unlikeliest of heroes equalizing for the Pens to take us into the 2nd intermission deadlocked at 2.

It wasn’t without a little piss your pants time, though, with the Penguins starting the sequence looking like they were never getting out of their own end.

But Jason Zucker had different ideas, getting his stick on a point shot.  He doesn’t stop there and fly the zone, circling back on a little mini backcheck to get his stick on Dal Colle’s shaft to disrupt his shot enough that it goes wide.

Zucker again is the first man to the puck in the corner, turning it up ice in transition like an absolute demon.  Mayfield’s gap control on the zone entry is nice here, knocking the puck away from Zucker, but as he tried to pass the puck out of the zone, Malkin and Kapanen pop up out of nowhere to force the turnover.

The pass from Kapanen is total pants ointment here, giving Malkin unmitigated permission to snipe.  First 5v5 goal for 71 this year.  Have to love it.

All Pens to open the third, so much so that it didn’t take long for them to finally be rewarded for their efforts.

The Crosby line was buzzing all night and deserved a goal that all three of them factored in on.

This was that goal.

Give Letang a ton of credit to get this rolling.  He wins the race to the dump in, sealing Clutterbuck off from being able to make a play.  As soon as Cizikas pinches to him, he’s breaking the puck out with a short little pass to Rust in support.

Never a bad move to immediately give the biscuit to 87, who, instead of trying to force a controlled entry, lifts it up over everyone and turns it into a race.

Matt Martin wins that race, but Matt Martin is not very good at hockey and turns it over under the pressure from Sid and Jake.

Puck Support City from Rust, who combines with Crosby in the corner to open up some space for Jake to find, take the 87 pass, and bury it.

And if you thought this game was going to end without Cal Clutterbuck popping up to be a villain, you haven’t been paying attention to the last 8 years of Penguins/Islanders hockey.

Letang and POJ do well in the breakout to get the puck in deep for the Blueger line to burrow in.  Teddy, though, can’t do anything with it and he, O’Connor, and Tanev all get trapped in deep in transition.

Still, there’s not a lot of trouble here.  Matt Martin isn’t ever getting a controlled entry on POJ or Letang, so he dumps it in for Cizikas to have a shot at it.

That’s where the wheels fell off.

For as good as Letang was on Guentzel’s goal, he makes a mess of this one.  He looks over his shoulder, knows Clutterbuck is there going to the net, and still opts to try to help POJ out and turn the puck over.

If he stays at the netfront, he probably clears the hopeful Cizikas pass out of harms way and the Pens go on to maybe hold on to this lead.  But, it’s also hard to blame him for wanting to go back and help his partner out.

But he leaves the netfront, leaves Clutterbuck, and leaves Jarry with no help.

Then, with 3 minutes and change left in regulation, the first penalty of the night was called after Blueger airmailed the puck over the glass for a delay of game penalty.

Eberle was a menace on the peep, but not the menace this time around.  That dishonor goes to Anders Lee.

Tanev in particular was the guy allowed to chase the puck to the boards and nearly won a board battle just before this against Pulock.

He didn’t, and both special teams units set back up.  Barzal got the focus of Lafferty and Ruhwedel, drawing them both in to open up the lane to feed Pulock’s howitzer.

Jarry makes the save, then just…loses it?  Lee finds it just sitting in the blue paint and wins it.

But with just under 3 minutes left to try to find the leveler, it just wasn’t ever going to be enough time against this team.

Pens get another few days off with their Tuesday matchup against the Devils postponed and instead having another go at these Islanders at Thursday night at Nassau.  Do it.