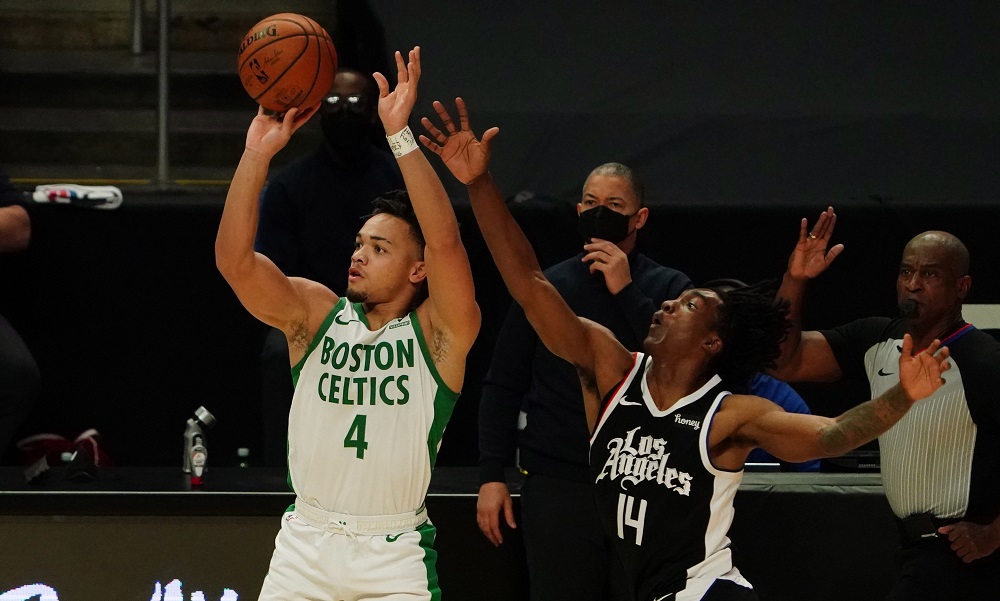 The Celtics, down by 16 in the first half, roared back to beat the Clippers on Friday night in LA, easily one of the most impressive wins of the season. Jayson Tatum was a stud, Kemba Walker was rejuvenated, the bench – led by Carsen Edwards – came up huge, and the Celtics made all the clutch plays and shots they needed in crunch time.

Something about playing the Clippers brings out Tatum’s best. He had 34 points and seven rebounds, but it was a resurgent Kemba Walker who put Boston over the top. With Jaylen Brown and Marcus Smart out, Walker had 24 points including 10 in the fourth quarter. He made two free throws to seal the win with 5.7 seconds left.

Carsen Edwards: With Brown and Smart sidelined, the Celtics were in desperate need for a boost in the backcourt and they got one in the second-year guard. He scored 13 points in the first half on 5-of-8 shooting, including his first three 3-point attempts before finishing with 16 points in a career-high 30 minutes. Held up well during crunch time.

The Celtics trailed at halftime, 62-51, but outscored the Clippers, 38-20, in the third quarter thanks to a rejuvenated defense and scorching 8-for-11 shooting from beyond the arc.

Boston led by as many as 9 points in the fourth quarter before the Clippers pushed back with their own run and took a 108-106 lead on a Kawhi Leonard baseline jumper. But Edwards, who was inserted for some rare crunch-time minutes, was fouled on a 3-pointer and hit all three free throws to give Boston the lead. Lou Williams put the Clippers back in front, 112-111, on a 3-pointer from the left corner with 45.8 seconds left.

Globe: Kemba Walker said he would improve in the fourth quarter and he did just that as Celtics top Clippers, and other observations

After the LouWill triple, this happened.

In the final half-minute, Semi Ojeleye dug in defensively and got two straight stops on Kawhi. The Clippers were forced to foul, and Tristan Thompson and Grant Williams – two of Boston’s worst free throw shooters – both sank two clutch FTs for a 5-point lead. LA stayed alive by yet another three from Lou with 9.0 seconds left. But Kemba clinched it with two more at the line.

Red’s Army will have more about the game later today in our regular “5 Thoughts” feature.

MassLive: Celtics’ Carsen Edwards’ picked a good night for his best game: 5 things we learned from Boston victory (subscribers only)

Boston Sports Journal: Carsen Edwards rises to the occasion in win over Clippers

On Page 2: Will the injuries ever stop?

As noted above, it was a good news/bad news day on the injury front.

#NEBHInjuryReport for tonight vs. LA Clippers (2/5):

Also, Daniel Theis had a balky knee and played just a few early minutes against the Clippers. He’s the only Celtic to appear in every game so far, but that might end tomorrow afternoon in Phoenix. Ugh.

Even though the perpetually injured Gordon Hayward has moved on, the Celtics continue to astound us with their injury rate. It’s almost impressive.

So far this season, the Celtics have played 21 games, and 19 of them have been without one or more of their core four (h/t @AdamTaylorNBA). Each of the four has missed at least one game: Kemba sat out the first month for his knee treatment and is still resting on back-to-backs; Tatum had COVID-19; Smart has the calf muscle tear; and now Jaylen with the knee.

When Hayward was in Boston, his health was a news topic every day for three seasons. It was exhausting. In hindsight, his broken ankle after five minutes was a sign for how his Celtics years would go. Remember, he also broke his hand in his second season, and last season sprained his ankle in the first playoff game, which truly killed any chance the Celtics would reach and perhaps win the Finals.

Just to torment myself, I looked back to find other years when injury directly cost the Celtics a strong chance at a ring. There were way too many.

Every team deals with injuries, that’s obvious. For instance, the Lakers lost starters Magic Johnson and Byron Scott to hamstring injuries in the 1988 Finals, and got swept by the Pistons. It happens. (Note: that was me being nice to the Lakers. It won’t happen again.)

Back in Boston, we keep waiting for the day when the “Hospital Celtics” finally become healthy. It has to happen someday. Doesn’t it?

And, finally… LeBron and Kemba agree

“I have zero energy and zero excitement about an All-Star Game this year,” James said after the Los Angeles Lakers’ 114-93 win over the Denver Nuggets on Thursday. “I don’t even understand why we’re having an All-Star Game.” […]

“Short offseason for myself and my teammates, 71 days,” James said, referring to the time the Lakers had from Game 6 of the NBA Finals in October to opening night against the LA Clippers in December. “And then coming into this season, we were told that we were not having an All-Star Game, so we’d have a nice little break.” […]

“And then they throw an All-Star Game on us like this and just breaks that all the way up. So, um, pretty much kind of a slap in the face.”

James also stated the obvious health concerns of staging the festivities in Atlanta, where there are fewer state-mandated coronavirus restrictions compared to other NBA locales around the country. The Atlanta Hawks, for instance, are one of only nine teams allowing fans at their home games this season.

“We’re also still dealing with a pandemic,” James said. “We’re still dealing with everything that’s been going on, and we’re going to bring the whole league into one city that’s open? Obviously, the pandemic has absolutely nothing to do with it at this point when it comes to that weekend.”

Kemba Walker knows he’s not getting voted or selected to his fifth All-Star game. Given the caution he and the Celtics are taking with his knee, this might be a good year to miss even if things were normal. […]

“I’m probably not going to be selected so I could care less,” he said. “We all saw what ‘Bron said. I agree. He’s a smart man. He’s been around. He’s a leader. A lot of things he says are correct. I’m probably going to be on vacation.”

LeBron and the Celtics agree on something for once. Staging an All-Star Game this season is stupid and unnecessarily risky. Go ahead and choose the teams – many players have All-Star selection incentives in their contracts – but leave it there.

Do they need more of a lesson than what happened to Kevin Durant last night? He was out, then in, then out as the league tried to conform with protocols.

So… Kevin Durant was ruled out due to health and safety protocols, then played in the first half of the game, and now has just been pulled again for safety reasons.

The rest of the Nets have been cleared to travel to Philadelphia tonight for Saturday's game against the 76ers, but Durant will not make the trip, sources tell ESPN.

Kevin himself summed it up in this pithy statement.

Boston Sports Journal: The start of trade season: Examining the new list of players who can be traded through a Celtics lens