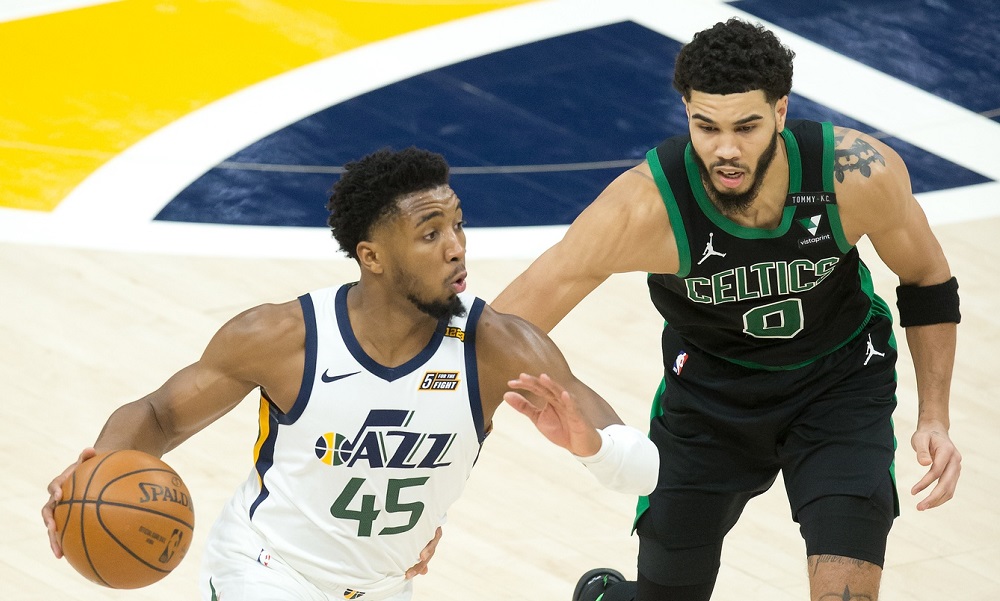 The Celtics came home from their week out west with a 2-3 record after a 122-108 loss to the Jazz last night. Losing at Utah is not shocking; at 20-5, the Jazz are atop the NBA. Unfortunately, the Celtics are now 12-11 and fourth in the East, actually closer to the 10th seed than the top seed.

Jaylen Brown returned after missing two games and his knee didn’t seem sore anymore – he scored 33 points in 37 minutes. Jayson Tatum added 23 (17 in the second half) but made just 7 of 20 shots. Boston’s bench outscored the Utah second unit, 23-19. The Celts were burned by Donovan Mitchell’s 36 and Joe Ingles’ 24.

Unlike the past couple of games, the Celtics avoided falling into a hole early. In fact, they made 7 three-pointers in the first quarter to lead 27-24. They cooled off in the second quarter, and Utah took a one-point lead into halftime.

The Jazz grabbed control in the third quarter (described below), upping the lead to 11. The Cs fought back in the fourth, and several times got to within a couple of buckets, but Utah answered each time.

With 3:10 to play and Boston within four, Utah finished with a 14-4 run to win by 14, which was their largest lead of the game. Mitchell and Ingles each scored 10 in the fourth to close it out.

On to the five thoughts.

The Celtics often have trouble with the third quarter, and this time it wasn’t unexpected.

Jazz have been the #1 team in 3rd quarters with an offensive rating of 126. Celtics rank 25th in 3rd quarter defense. Lets see if it holds

The Jazz shot 60% in the period to outscore the Celtics, 42-32. Mitchell was the main tormentor with 14 points. The Celtics gave up two 4-point plays and, after a Jazz basket, screwed up the routine inbounds pass without even being pressured by he defense. Oof.

Adding to the ugliness: After a first half with seven fouls called on each team, and just seven total free throws, the refs dominated the third quarter by calling 10 fouls on each team – 20 fouls in 12 minutes! Both squads went 13 of 14 at the line.

Utah is a potent offensive team, and they demonstrated that all night. Their 122 points was one point shy of the most the Celtics have allowed this season.

The Jazz average a league-best 17 threes per game; in this one they made 18 of 48. Spreading the floor so effectively contributes to their league-leading offensive rebounding percentage (30.4%). Against the Celtics, they had 10 offensive boards and 23 second-chance (sometimes third-chance) points. The Cs actually had 11 ORebs for 19 points, which most nights would be an advantage for them – but not against the Jazz.

With the Celtics defense concerned about the perimeter, the Jazz were able to penetrate and set up Rudy Gobert for numerous uncontested dunks. Bojan Bogdanovic, not at all known as a high-flyer, twice drove freely to the rim for vicious throwdowns. He almost had a third, but was stopped by a Daniel Theis foul.

Bogdanovic getting to the rim like he's LeBron is not great

Speaking of Theis, the referees’ war on him continued. He had several tough whistles and fouled out with 5:23 left. That was a bigger loss than usual because, in 28 minutes before that, Theis lit it up with a career-high 5 of 6 three-pointers.

If Tommy Points are still a thing, TT gets one here.

Thompson’s improved play is encouraging, but his flaws are still there. Per NBA Stats, opponents guarded by him this season are shooting 57% (compared to Theis: 43%). His offense is limited to maneuvering for short hook shots. And his 23 minutes per game are holding back Rob Williams (15 minutes PG).

TT might be most valuable to the Celtics at the trade deadline.

The Celtics marketing department calls The Jays “Fire and Ice,” but if you replace Jayson with Kemba Walker, their nickname could be “Fire and Ice Cold.”

Against the Jazz, Jaylen drilled his first three shots – all triples. He went on to make 12 of 20 from the field overall.

Kemba has me worried to the point of being concerned about what the team can be. He’s posting 47% TS on 29% usage. That’s first degree murder.

Again, there’s nothing that can be done about it right now but… I mean… it has to turn around soon. Just wasting the Jays right now.

Kemba is moving well so his knee might not be the problem. But what is? The Celtics are going nowhere unless Kemba returns to some semblance of the All-Star that he was last year.