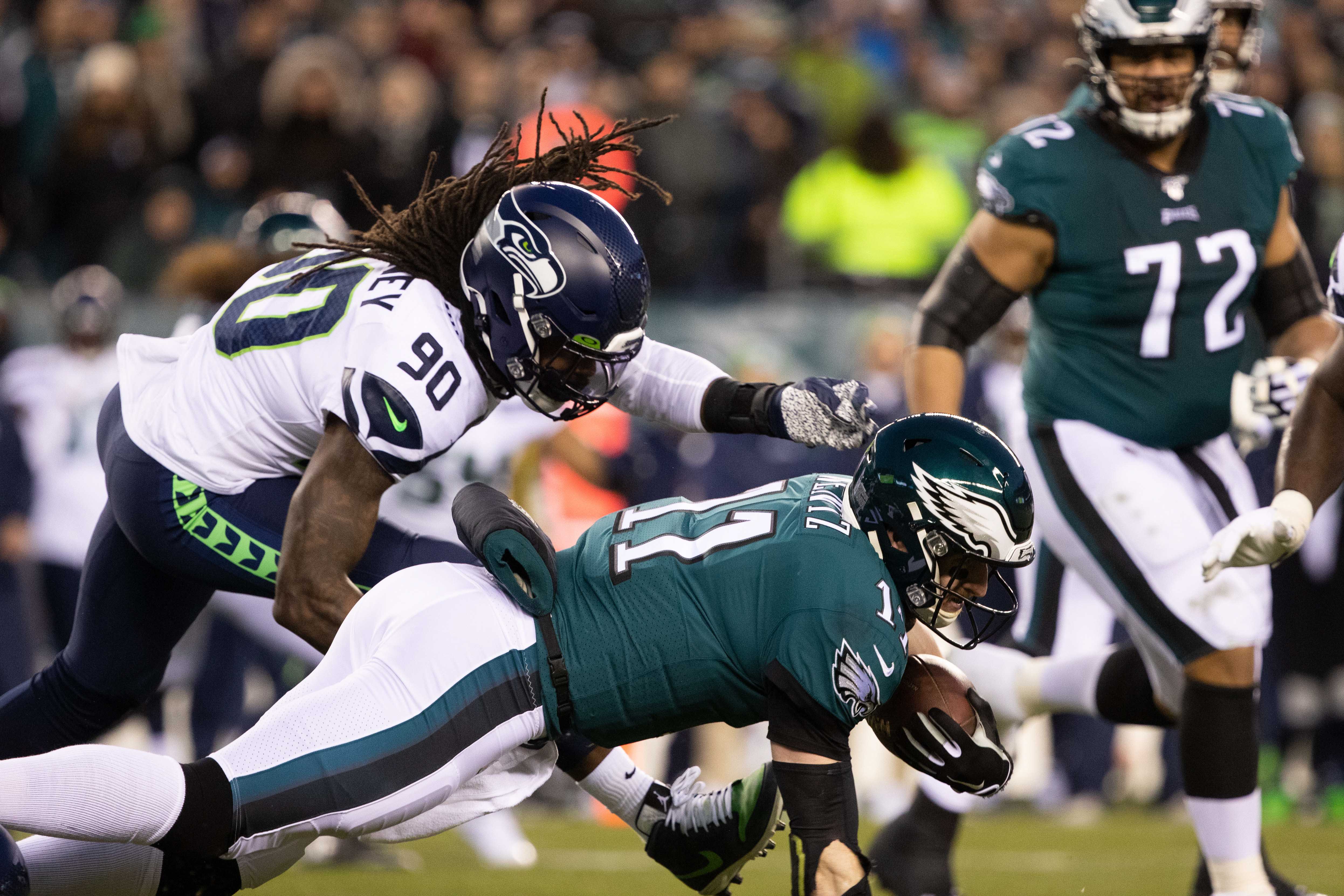 It’s probably accurate to say Eagles fans are split 50-50 on the impeachment of Carson Wentz as their franchise QB.

Hey, you might not have loved his 2020 results, but the fact is you loved most of his QB performances and policies whilst he was relatively thriving from 2016-2019.

Alas, one bad year with a bad team in the NFL apparently gets you impeached… if you’re playing QB#1.  Same concept applies to the former President of the USA… and it’s a similarly raw deal.

To be honest, Wentz did lose his main mojo, which basically consisted of the ability to bust out of pass-pressure jail and make big plays.  There are a lot of factors involved including weak protection in the pocket, but the bottom line is Wentz lost just enough mobility and quick-trigger confidence after a series of debilitating injuries to negate his legacy of big plays.  He devolved into “just a guy” scrambling for his life and the life of the play on too many downs.

Welp, you can get impeached for that career hiccup in the NFL, especially if you are under contract with the Eagles with a guaranteed $70 million extension amid a fan base which does not specialize in patience with an off-year.

So impeachment in the NFL involves trading the guy out of town to another political party, so to speak.  But the impeachment of Carson Wentz is hitting a snag.

From NFL Now on @nflnetwork: No indications right now a Carson Wentz trade is imminent. Everybody playing poker, as the #Eagles wait for an offer that’s to their liking while the #Bears and #Colts explore their options.
Eagles are asking for two 1’s for Carson Wentz, which has led to some blaring dial tones, including from one team previously perceived to be a favored landing spot.

Mike Kaye wrote a good summary of the situation. He appeared to expect a deal on Monday or Tuesday. But that didn’t happen.

“When I say I’m ready for Wentz to be gone and this to be over, some people take that as me hating Wentz. That isn’t the case. I covered Wentz at the 2016 Senior Bowl and came away very impressed. I thought the Eagles were lucky to draft him and I was excited to once again have a true franchise QB. Things fell apart in the years after the Super Bowl, with Wentz hitting rock bottom last year.”

“Wentz wants out of Philly. He wants to be traded. If the Eagles try to keep him, they would be holding the guy “hostage” and it would not go well. I don’t think he would turn into 2005 TO, but you don’t want a QB who doesn’t want to be here. That would be a disaster.

“The Eagles have to trade Wentz. This isn’t what they want to do. It has to happen.

“We can argue about who is at fault (everyone) and why this happened, but the bottom line is that the marriage is over. We’re just waiting for the divorce to be finalized.

“The Eagles aren’t giving up on Wentz because he suddenly lacks talent. When he is on his game, Wentz is still an outstanding QB. The problem is that he completely fell apart last year and I think a fresh start is a key part of getting him fixed.”

So now you have a new wrinkle on the impeachment analogy.  The Dems want to impeach a former President and convict him so he can never run again for office.  But the impeachment of Carson Wentz is more simply about dumping his salary and getting him employed by a rival party.

In both wrinkles, be careful for what you wish…