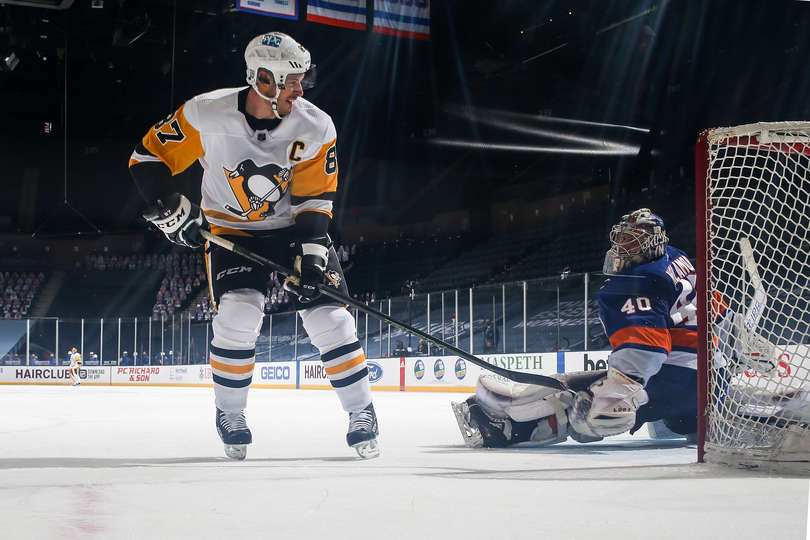 UNIONDALE, NEW YORK – FEBRUARY 11: Sidney Crosby #87 of the Pittsburgh Penguins scores a goal during the shootout past Semyon Varlamov #40 of the New York Islanders at Nassau Coliseum on February 11, 2021 in Uniondale, New York. (Photo by Mike Stobe/NHLI via Getty Images)

It’s time to get weird. The Ron Hextall – Brian Burke era is underway as the Penguins attempt to salvage any life they have left out of Sidney Crosby and Evgeni Malkin’s final seasons as some of the league’s top players.

Playing the New York Islanders for the second time in as many games, the Penguins gave up a slew of high-danger chances in front of their net despite controlling play for large stretches and a 58 – 52 edge in shot attempts.

All situations, the Islanders had a 3.6 – 2.7 advantage in expected goals, per Evolving Hockey.

Zach Aston-Reese made his season debut after recovering from shoulder surgery. Last season, his trio with Teddy Blueger and Brandon Tanev was one of the best defensive lines in the NHL.

Casey DeSmith got the nod in goal.

Jared McCann is out week-to-week with a lower-body injury.

The Islanders’ heavy forecheck paid dividends early when Casey Cizikas pressured Penguins defenseman John Marino into misplaying a bouncing puck. Despite an effort by Marino to push Czikas off the puck, he made a nice move in tight to slip the puck by a sprawling DeSmith.

The exact words we love to hear when describing a Penguins goal. pic.twitter.com/bqZHbwEsZB

The Crosby line executed a cycle to perfection to open up space for Jake Guentzel who then found Bryan Rust for a tap-in at the goal-mouth. Tie game.

John Marino won’t get an assist, but give him credit for his shimmy move at the point to find a lane to walk to the outside.

That hand-eye coordination though 👀 pic.twitter.com/1RKhkHIJBG

On the back of a Cody Ceci delay of game penalty, the Islanders reclaimed the lead on the power-play when J.G. Pageau deflected Nick Leddy’s point shot past DeSmith. He was practically uncontested, as Marino made no attempt to tie him up or clear him from the front of the net.

HAIL TO THE cZAR! pic.twitter.com/IZzEMEKON3

It didn’t take long for Aston-Reese to make his presence felt as he bullied his way to the front of the net for a goal on the backhand.

The entire sequence is what makes him an impactful bottom of the lineup player and a perfect fit to play with Tanev and Blueger. He forechecked hard, boxed out the defenseman from the puck, won the battle, then got the puck directly to the front of the net for two backhand opportunities, the second of which slipped by Semyon Varlamov.

As the Penguins continued to control play, I got the growing sense they were going to give up a heartbreaker in the waning minutes of regulation. Sure enough, Mat Barzal found himself in a 1-on-1 situation against P.O. Joseph on the rush and made a disgusting move to score.

Malkin put my sentiments to shame with time winding down in regulation. After a timeout and pulling DeSmith for an extra attacker, Letang slid a pass to the top of the right circle where Malkin wired home a one-timer for his third goal of the season. That’s goals in back-to-back games for Geno.

Unlike many of their five-minute extra frames, the Penguins didn’t possess the puck for much of overtime. While both teams traded chances, neither could find twine.

The lone goal of the shootout belonged to Crosby as he made an absolutely filthy move to beat Varlamov. It appeared as though Crosby was looking five-hole, as is often the case, but an extra stick handle caused Varlamov to bite and allowed Crosby to backhand the puck to the back of the net.

The Penguins are back in action Sunday afternoon when they host the Washington Capitals for a Valentine’s Day affair.