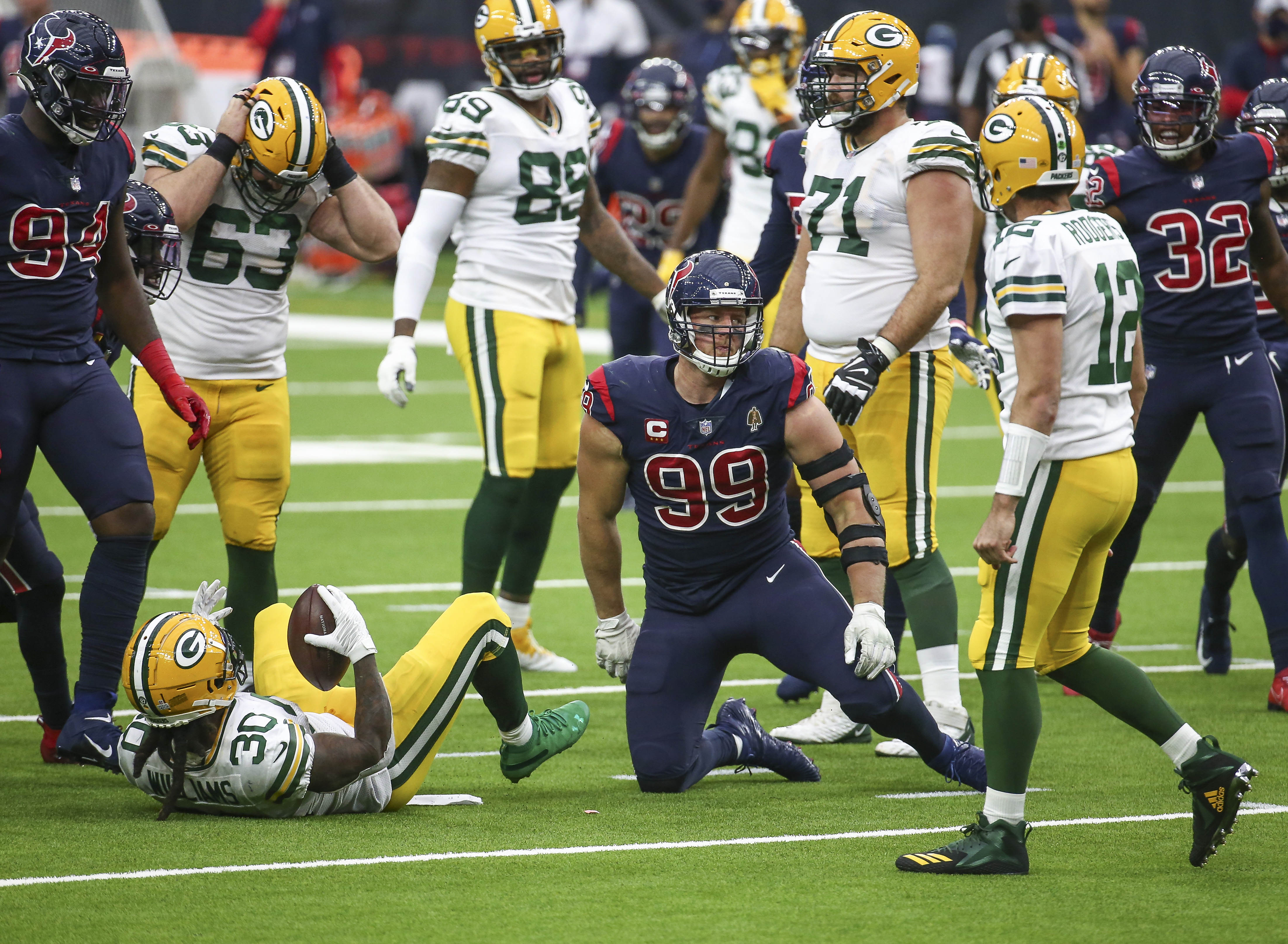 The Houston Texans announced this week that they were releasing defensive end J.J. Watt. Packers fans immediately got excited about the possibility of Watt joining the team if they could sign him as a free agent.

There are many pros and cons to signing Watt and here are the major arguments for both sides:

J.J. Watt is a Wisconsin native, being born in Pewaukee back in 1989. He also attended the University of Wisconsin where he starred in 2009 and 2010, recording 11.5 sacks and 36.5 tackles for loss in those two seasons.

Certainly, it would be a thrill for Watt to return to his roots and play for his hometown team and that would be a sentimental and inspiring moment for both Watt and the fans of Wisconsin.

Watt has been an outstanding player throughout his career in the NFL. He is a five time All-Pro and has been voted to the Pro Bowl five times. He is a three time winner of the AP Defensive Player of the Year and twice led the NFL in sacks.

Watt is a relentless pass rusher and does a good job playing the run. Twice he recorded more than 20 sacks in a season and three times he has led the league in tackles for loss.

The Packers pass rush did not produce as much pressure on opposing quarterbacks in 2020 as they did in 2019 and adding Watt should free up players like Za’Darius Smith and Rashan Gary to get more sacks as opposing offenses will be forced to try to slow down the threat of Watt’s pass rush.

Watt isn’t just a talented football player. He has also been heavily involved in charity and community work since joining the NFL. He is the president and founder of the Justin J. Watt Foundation which helps local high school students play athletics after school in a safe environment.

After Hurricane Harvey devastated Houston, Watt helped raise of $37 million to help the city of Houston and the surrounding areas to rebuild and recover.

These are just some of the many charitable activities Watt has been involved in during his career. He would clearly be an asset to the Green Bay area if he continues these charitable endeavors.

The Packers defensive line is an area the team has been looking to improve for several years. Kenny Clark is a Pro Bowl caliber player on the line, but after that, there is a large drop in talent and production at the position.

Kingsley Keke is the only other defensive lineman who has showed the ability to rush the passer and he recorded four sacks last season with all of them coming in two games. Keke has potential, but he has yet to become a consistent pass rusher in his first two seasons in the league.

Watt would clearly be an upgrade at a position the Packers need improvement. How well he would fit in to new defensive coordinator Joe Barry’s system is a question that has yet to be determined.

There are several issues to consider before signing Watt.

The Packers are already significantly over the projected 2021 salary cap, approximately $28 million over the cap according to several estimates.

It would cost at least $5 million a year and probably closer to $8 or $9 million to add Watt to the Packers roster and that’s assuming Watt offers the Packers a bit of a discount because he wants to play in his home state.

The Packers have other areas of need to address and will have to release several players including some starters to get under the cap.

There are ways to free up cap space. In addition to releasing players, the Packers could extend or restructure the contracts of several players including Aaron Rodgers, Adrian Amos, Davante Adams or Za’Darius Smith.

Getting under the cap will be a challenge and adding Watt would make it even more difficult.

Watt will turn 32 next month. When Packers fans think about adding J.J. Watt, they remember the dominant player who went to four straight Pro Bowls from 2012-2015. But Watt has only been to one Pro Bowl since then and that was in 2018.

In the last two seasons, Watt has a total of nine sacks in 24 games. He is no longer the dominant force he was in his mid-20s. Watt played in 91 percent of the Texans defensive snaps in 2020 but might be better served by being more of a rotational player going forward.

Keep in mind, Watt will only get older so the Packers should expect diminishing returns from Watt as the deal plays out.

Watt has suffered several major injuries in recent years. In 2016, he played in just three games for the Texans because of a back injury. The following year, a broken leg limited him to five games. In 2019, Watt missed eight games because of a torn pec muscle.

Most football players are more susceptible to injury as they get older and there’s more wear and tear on their bodies.

Signing Watt would be a big gamble. If the Packers release several players to sign Watt and he plays only a few games before suffering another injury, the Packers would be left with almost no production on a big and expensive investment.

We still don’t know exactly what style of defense new defensive coordinator Joe Barry will play. Many believe he will go to a Vic Fangio style defense which can feature two or three down linemen and usually uses a 3-4 in base formations.  Watt has played most of his career in a 3-4 style of defense but how would he fit in to Barry’s designs?

Barry will find a way to fit a talent like Watt into his system if the Packers sign him but it remains to be seen how effective Watt would be in Green Bay.

Paying big money for Watt is certainly a gamble. Whether the Packers will take that chance is another question facing the organization this offseason.