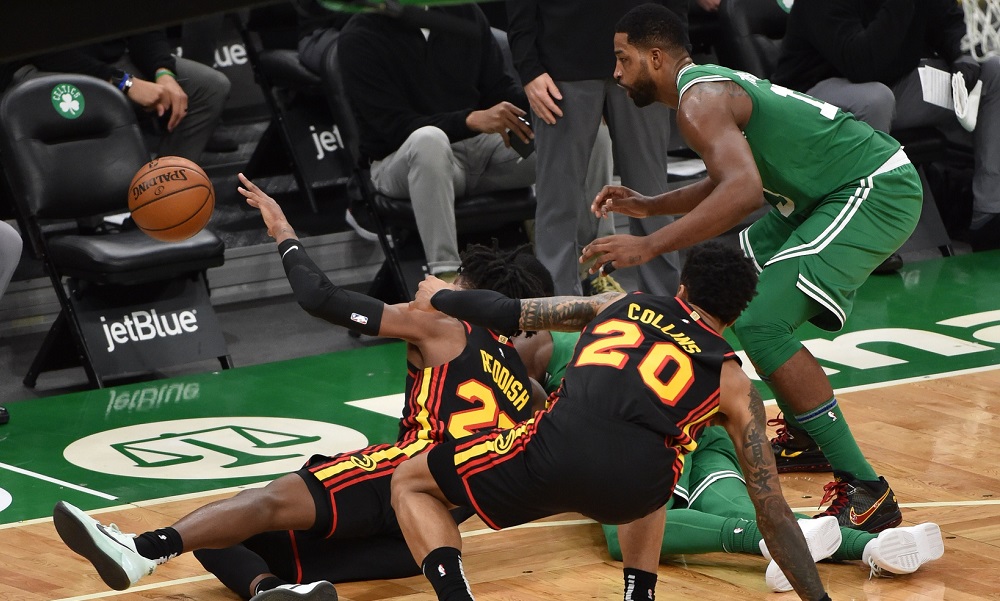 Coming off a solid win over Denver on Tuesday, the Celtics had hopes of starting a win streak against the 11-16 Atlanta Hawks. But it’s hard to beat any team when you let them score 122 points.

Trae Young led the visitors with 40 points – 16 in the fourth quarter – to the 122-114 win in Boston, Round One of three games in a week against the Hawks (they play again Friday and in Atlanta next Wednesday). It was another one of those frustrating nights where the Celtics fell behind (this time mid-second quarter) and never caught up because they couldn’t seem to get consecutive stops at any time.

With Kemba Walker not playing on the second of two straight nights, Brad went with … no point guard?

Strong move by Nesmith (prob an and one too🙄) pic.twitter.com/KovNKEGUFN

Hell of a stretch there from the Celtics’ youngins! Nesmith with the block. Grant with the floater. Pritchard finishing through contact. Nesmith with the driving bucket. C’s need these guys to play well, and they’re answering the call.

After 1 in Boston: Celtics 35, Hawks 33. Trae Young and John Collins each have nine points for Atlanta, which shot 57 percent overall and 50 from 3, but committed five turnovers. Jayson Tatum had seven for Boston, while Semi Ojeleye and Tristan Thompson each have six.

The Celtics defense hasn't been good, but the effort has been. One way you can tell? The switching is solid. Especially the jump switches and switch-backs. Those are the things that have been missing too often this season. Requires communication and connectedness to do well.

Hawks are 14 for 22 on twos and Celtics are 15 for 23. Some halfhearted interior defense on both sides.

Celts fell behind because of lack of a) defense and b) offense.

It's a layup line against Boston's defense right now. #Hawks up to 58%

About that ball movement…..

Celtics offense has fallen apart a little bit here with Tatum on the bench.

Why is Jaylen running the offense with PP in the game!?!?

I’m not enjoying this game.

At halftime, Atlanta was shooting 60% and only Tatum was keeping the Celtics afloat.

The drive ✅
The dish ✅ pic.twitter.com/j4IQHnuge1

We interrupt this recap for some Timelord love.

Back to the bad news.

#Celtics just paying for every mistake. Cutting #Hawks lead to 4, Cam Reddish comes back with a contested stepback jumper than bounces five times before falling. After a missed Jaylen 3, Gallinari hits a 3. ATL 90, BOS 81.

Missing Kemba is a big challenge, but these second unit lineups are struggling mightily to run anything against what has been the third-worst defense in the league over the past 2 weeks.

At the same time, 90 points through three quarters is pretty inexcusable https://t.co/C6dp92n90B

Everything began to disintegrate. Related: Jeff Teague got minutes.

Grant made a bad pass but then neither Tatum nor Brown did anything to help him after he saved the loose ball. They both just sort of stood there. He was obviously stuck and no one went to the ball so he was forced to just toss some garbage at the rim.

With all due respect Teague, get off my team

40 points for Trae Young, 25 in the second half

Seems like we’re going to lose nearly every game on these back-to-backs until Marcus is back unless Kemba can start playing in them.