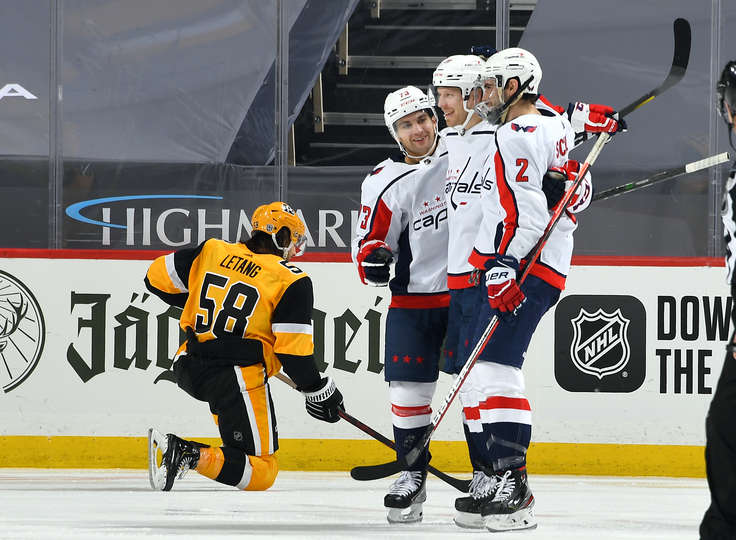 Coming off just their second regulation win of the season and first win by multiple goals, one would figure the Penguins would come out buzzing against the Capitals, losers of four straight.

The Penguins did come out buzzing, largely thanks to a couple of Capitals penalties, but most of their mojo for the night was used up on a couple of clangs off the iron that would’ve drastically changed the outlook of the game had they gone in.

The Penguins looked flat most of the night, something they are extremely susceptible to if the Crosby line isn’t at the top of their game.

All situations, shot attempts were 60 – 46 for Washington. Though scoring chances were nearly even, the Capitals had a 13 – 5 edge in high-danger chances and a whopping 4.19 – 1.66 expected goals advantage, per Evolving Hockey.

The Penguins failed to convert on a 5-on-3 power-play early in the game. Sidney Crosby had Washington netminder Vitek Vanecek beat, but he rang the puck off the post.

Neither team scored in the first period. Although scoring chances were even, if you take away special teams work, the Capitals outchanced the Pens 7 – 3.

Five minutes into the second period, former Penguin Conor Sheary was able to sneak toward the slot unmarked and rip a shot past Jarry because the Penguins were puck watching. That’s Sheary’s fifth goal in seven games against the Pens.

Though the Penguins were puck watching, Jankowski and Jarry are largely at fault for this one. Jankowski committed to helping battle in the corner when he should’ve been keeping tabs on Sheary. Jarry was too deep in his crease, off his angle, and seemed to lose track of the puck before the shot.

Jankowski has been downright atrocious and doesn’t look like a player that should be in the lineup. The Penguins don’t have much of a choice right now, though.

Halfway through the game, T.J. Oshie dished a sweet backhand pass across the offensive zone to find an unmarked Jakub Vrana who absolutely wired home a wrister past Jarry.

Mike Matheson was watching the puck the entire time. He had no idea Vrana was there until the puck was on his stick.

This line is COOKIN' pic.twitter.com/IZy87KUfuC

The Capitals all but put the nails in the Penguins’ coffin just over a minute into the game’s final frame when Kris Letang and Pettersson had an utter breakdown leaving Lars Eller wide open on the door step.

The Sheary-Eller-Panik line dominated the Penguins in nine and a half minutes at 5v5. They took 13 shot attempts to the Penguins’ one, controlled 90.9% of the expected goals, and on-ice goals were 2-0 in their favor, per Natural Stat Trick.

The lone Pens goal of the evening came off the stick of Zach Aston-Reese, who now has two 5v5 goals and an empty-net goal in three games since returning from injury.

This goal gave the Penguins some life to try and tie the game, but it was too-little, too-late as they failed to score the remainder of the game despite a power-play opportunity and an extra attacker from pulling Jarry.

The Pens are back in action Thursday when they host the New York Islanders.