Your Morning Dump… Where, for one day, Celtics fans can sit back and savor that win 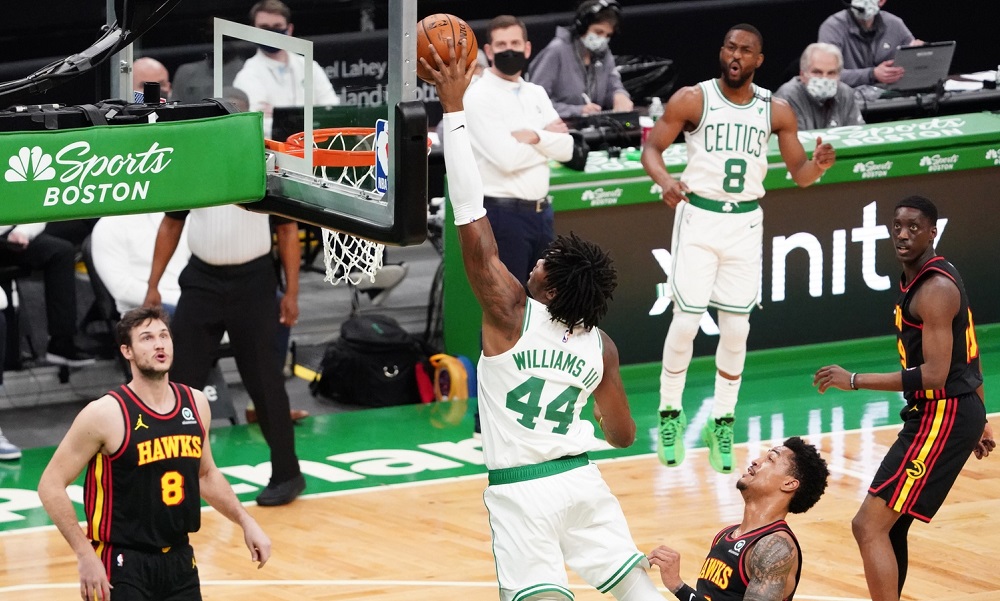 Your Morning Dump… Where, for one day, Celtics fans can sit back and savor that win

Coming off their loss to the Hawks on Wednesday, almost all the Celtics were available for Friday night’s return engagement. Guess what? It made a difference.

🧐 our crew found the secret to Boston’s success. pic.twitter.com/I7VxAs1uFp

Kemba Walker and Daniel Theis watched from the bench Wednesday as the Celtics were handed a humbling defeat by the Hawks. But both were on the court for the rematch at TD Garden on Friday, and they ensured that the result would be different, leading the Celtics to a 121-109 win.

Walker had a season-high 28 points along with 6 assists and 5 rebounds, and Theis scored 10 of his 14 points in the final five minutes, helping finish off the Hawks after they had sliced a 27-point deficit to just nine.

The Celtics shot 56.2 percent overall and 41.2 percent from the 3-point line, helping them overcome a 31-point, 11-assist night from Hawks guard Trae Young.

Globe: Kemba Walker and Daniel Theis bounce back and other observations from the Celtics’ romp over the Hawks

It was a good night not only for the Celtics, but for their fans, as well. The recent spate of losing – five Ls in the last seven games entering last night — had dropped the team to a .500 record and had Danny Ainge saying this roster isn’t championship material. Anxiety was palpable in Celtics Nation.

The Cs led by 25 at the half and also after three, giving them enough cushion to stand the inevitable Hawks rally. Atlanta came as close as 9 with 4:50 to play, but never got closer.

The game went so well that even the double-big lineup worked for a change, plus Timelord was dynamic off the bench.

Williams had a big impact on the offensive end, finishing with 12 points on 6-for-8 shooting. Still, the Celtics still don’t seem to trust him down the stretch — or at least, they don’t trust him as much as Daniel Theis and Tristan Thompson.

On Friday, that proved to be the right decision, as Thompson and Theis rewarded Stevens for his continued faith. Stevens went back to the much-maligned double-big lineup, and the duo combined to shoot a sizzled 15-for-18 from the field, tallying 31 points.

Theis helped put it away by scoring 10 points in the last 5 minutes of the fourth. He repeatedly got free for alley-oops, shredding the pesky press that had helped the Hawks cut into the lead.

Notice we haven’t even mentioned The Jays yet. For one night, at least, they weren’t called on to carry the burden. Jayson Tatum scored 25 points on 10 of 21 shooting and Jaylen Brown added 17 on 6 of 12, including an eruption of three consecutive threes in the third.

As an indicator of how well the Celtics played, they had 26 assists on 50 hoops, distributed this way: Tatum, Brown and Walker, 6 each; Theis, 4; Thompson, 3; and Semi Ojeleye, 1. The ball movement was beautiful.

The Celtics are now back above .500, and they looked good getting there. Not perfect, but pretty, pretty good. So here’s some unsolicited advice. Just for today, stop worrying about injuries, Brad Stevens’ rotations, bench productivity, faltering defense, inconsistency, bad fourth quarters, relentless schedule, The Jays’ all-star chances, and any other problems plaguing the current Boston squad.

It’s been a rocky road back towards full strength for the veteran point guard this season after his offseason stem cell injection. Walker has started to gain some offensive rhythm over the past week however and that continued on Friday night as he played his best basketball of the season against the Hawks, scoring 20 of his season-high 28 points in the first half alone on 7-of-11 shooting from the field.

In less than 40 seconds, Walker went off for nine points, courtesy of two 3-pointers and an and-1 layup. That boosted the Celtics to a 25-point halftime lead on their way to a 121-109 win over the Hawks on Friday in TD Garden.

MassLive: Kemba Walker goes off for season-high in Celtics’ win over Atlanta, ‘looks a lot more like himself’ in recent games

Kemba looking like the Kemba of old was another wonderful subplot last night. After sitting out the previous game to rest his knee, he had his most effective outing of the season. He scored on drives (10 of 16 from the field) and from the arc (5 of 8). He even added 3 steals.

Besides all that, Kemba made this defensive play that snuffed out the Hawks rally and ended all suspense.

It’s what he does.

"I'm just trying to make the right plays; that's it. Just take what the defense gives me." – Kemba Walker.

Kemba Walker: “I feel really good, just having fun, getting stronger every day.”

Resting Kemba each second night may hurt the W-L record in the short-term, but it’s obviously helpful for his long-term progress. He’s rested four times, followed by point totals of 14, 24, 25 and 28.

If he can perform in the playoffs like he did Friday night, the plan will all be worth it.

Related – Boston Sports Journal: Karalis: Patience pays off for Kemba Walker in his most complete game yet  |  The Athletic: Kemba Walker hitting his stride as Celtics win rematch against Hawks

The Celtics are 27th in 4th quarter average scoring differential at -1.8. That’s a problem. The Hawks won the 4th quarter last night, 36-23.

But the Cs haven’t had a 4th quarter as disastrous as the New Orleans Pelicans did last night. The Pels held an 11-point lead on the visiting Suns after three quarters, and then…

Hope you didn't turn that one off. Suns demolish the Pelicans in a 41-12 4th quarter for a quite unbelievable comeback win. No energy for 3 quarters and then they exploded. CP3, Jae and DA led the charge in that 4th. Chris Paul was tremendous with 15-4-19. Crowder hit six 3s.

Pelicans were minus-29 in the 4th (41-12), it was the worst differential for a single quarter in franchise history.

The Celtics next game just happens to be on Sunday afternoon in … New Orleans. Should be interesting.