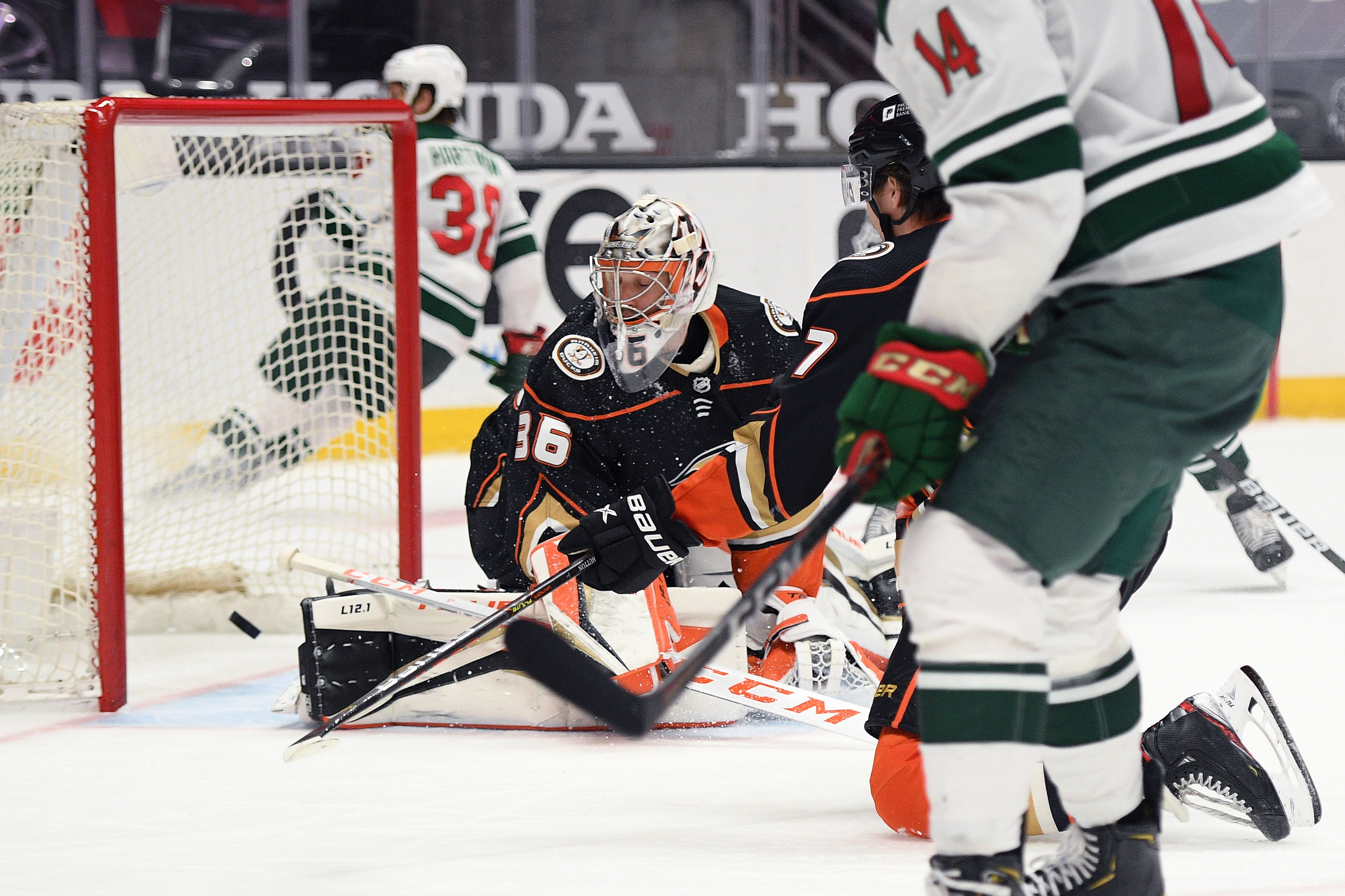 After Thursday night’s 3-1 win over the Anaheim Ducks, Wild Head Coach Dean Evason was not too pleased.  Sloppy passing, poor execution and not just on the power play turned what should’ve been a fairly simple game into a grind.  The Wild still managed to overpower the NHL worst offense in the Ducks, but they kept Anaheim in that area where they still felt they had a chance far too long and any coach knows that is a recipe for disaster or disappointment.

That wasn’t the case on Saturday as the Wild jumped out to an early lead and for the most part kept their foot on the gas.  Of course it doesn’t hurt going against the most offensively anemic team in the league either.  The Ducks just don’t have a lot of firepower and even when they manage to create a scoring chance its normally a one-and-done opportunity.

Mats Zuccarello got things going for the Wild with his first goal of the season on pretty snipe taken off the rush.  Its the kind of goal we have not seen from the Norwegian winger since the team signed him as a free agent last season.  His surgery and successful recovery hopefully we see more goals like that in his future.  Kevin Fiala would bury a goal off a rebound about a minute later to give Minnesota a 2-0 lead going into the 1st intermission.

Minnesota would add to its lead early in the 2nd as Fiala again crashed the net and scored on the power play to give the Wild a 3-0 advantage.  Fiala’s goal seemed to spark some fire from Anaheim and a fair portion of the period was spent trying to withstand the Ducks attack.  Anaheim’s persistence wold be rewarded as former Spring Lake Park Panther David Backes would score from in close to cut Minnesota’s lead to two.  Minnesota continued to be playing rope-a-dope against the Ducks for most of the period but still held its 3-1 lead going into the 3rd.

Minnesota would assert themselves again in the 3rd period as the Ducks started taking more chances to pinch with its defense which provided opportunities to attack Anaheim off the rush.  The Wild would strike in a pretty tic-tac-toe play as Kirill Kaprizov found Victor Rask off the rush and the Swedish-born winger netted his 4th goal of the season.  Joel Eriksson Ek would be the recipient of his own tic-tac-toe play later in the period as Ryan Hartman set the table perfectly for the Ek who buried his 6th goal of the year which sealed a 5-1 victory.  Kaapo Kahkonen made some nice saves down the stretch as the Ducks tried to push hard late to make it into a game.  Kahkonen finished the night with 26 saves. 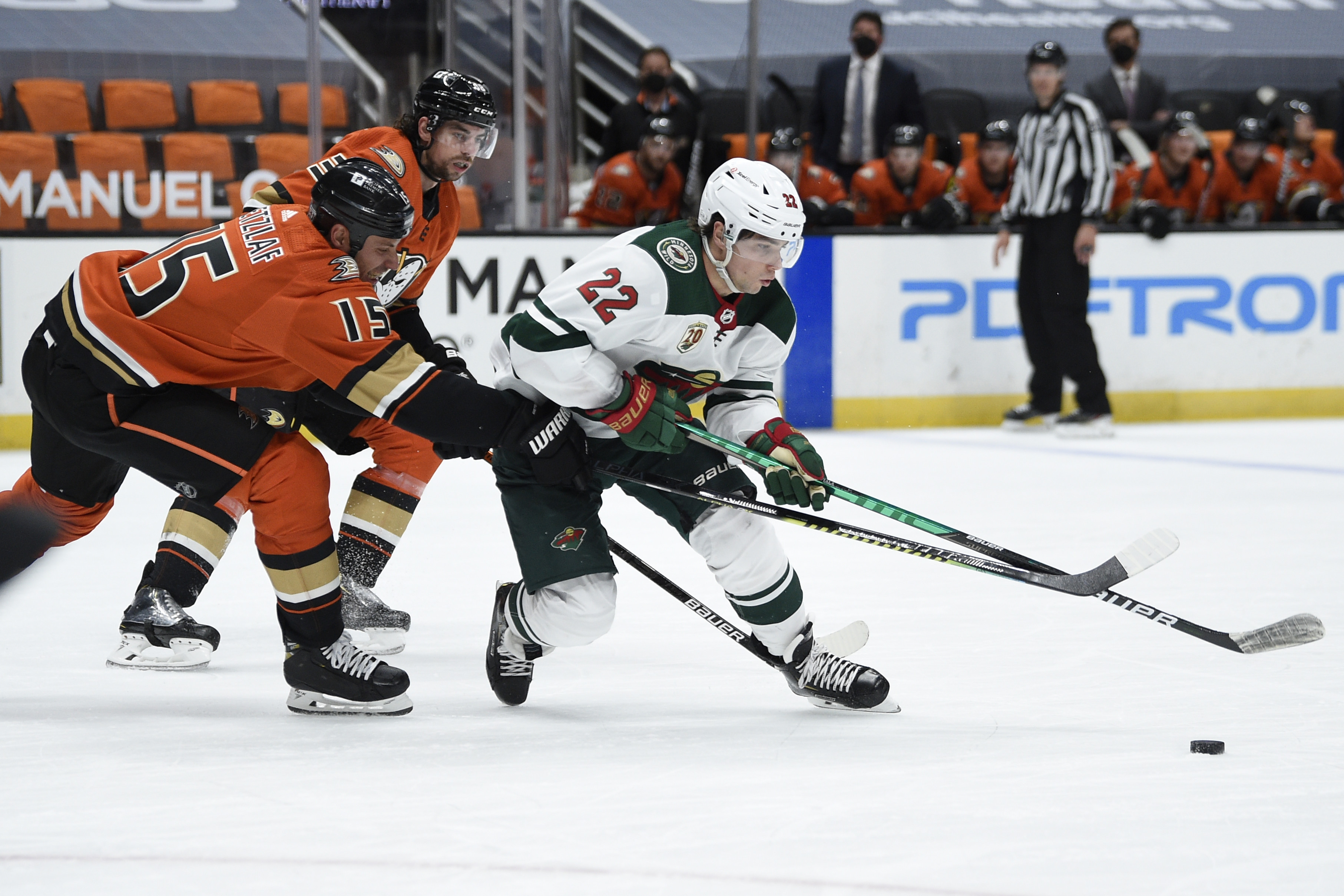 There is a saying in the aeronautics world that a play that performs well almost ‘looks fast, even if its standing still on the tarmac’.  Its like looking at a sports car on the lot (or in your driveway) you can just look at the car and tell it wants to go fast.  Right now, I see the same kind of determination in the Wild’s Kevin Fiala who looks like a player who wants to light the lamp early and often.  That’s good news for the team, as last year’s leading scorer Zach Parise has looked slow and at least a step slower this season and has just two goals so far on the season.

Fiala is all business in the offensive zone, using his speed and strength on his skates to protect the puck and get himself into a position to fire a shot on goal.  While his goal on Thursday wasn’t a pretty top-shelf snipe you could tell he wanted more as he was one of the team’s most dangerous players in the offensive zone as he registered 5 shots on goal against the Ducks.  As Anaheim Ducks’ TV analyst Brian Hayward pointed out on Thursday, its Fiala’s willingness to take the puck into the middle of the ice to create a scoring chance is what makes him special.  Maybe its out of necessity as much as his own initiative as the team lacks two Top-6 quality centers in its lineup so he knows he has to set himself up if he wants to score.

Fiala was equally assertive on Saturday as he crashed the net for two goals and added an assist in Minnesota’s 5-1 victory over the hapless Ducks.  It doesn’t have to be pretty plays or ridiculous snipes all of the time.  It is good to see him engaged and being rewarded.  When he’s dangerous it will help open up opportunities for his teammates as clubs shift their defensive approach to try to shut him down.

The 24-year old winger has 6 goals and one helper this season.  And at times you can almost sense the pressure he places on himself to be the go-to scorer for the team.  I think some of that has been reflected by the fact he leads the team in penalty minutes.  He’s being physical and playing on the edge because he wants the puck so he can make a difference for his team.  It is a shame the team hasn’t managed to acquire or better yet develop a Top 6 center for him to work with.

Just imagine how much more dangerous he and Kirill Kaprizov will be once they have a quality center that can compliment their already impressive skillsets.  The Wild have to continue to make this the top priority moving forward (no pun intended).

What did you think about the Minnesota Wild’s series against Anaheim?  Tell us on Twitter @CreaseAndAssist!

No, that is not a misprint.  The wheels fell off in this one 19 seconds into the game when the Chicago Wolves’ Morgan Geekie scored on Hunter Jones.  Iowa tried to answer back and swarmed in the Chicago zone, but they’d break loose and Anthony Richard would score off the rush.  Ryan Suzuki and former Gopher Rem Pitlick would strike a minute apart to give Chicago a 4-0 lead after that and Iowa Wild bench boss Tim Army would call a timeout to talk to his team.  I was really surprised he didn’t swap out Jones for Joe Rumpel at this point in the game but the rookie would stay out there for the rest of the contest.  Iowa would have a 5-on-3 after Richard boarded an Iowa player and was given a game misconduct but the Wild simply couldn’t get anything by Jeremy Helvig.  Iowa would avoid anymore damage in the 1st but still trailed by 4 going into the 1st intermission.

Chicago would renew their assault in the 2nd as Seth Jarvis, Geekie, Pitlick and Brainerd, Minnesota-native Cole Smith would light the lamp to make it 8-0 Chicago before the halfway mark of the period.  Jarvis would add one more on a shorthanded tally to give Chicago a 9-0 lead going into the 2nd intermission.

Iowa would score twice in the early part of the 3rd period as Damien Giroux set up Dmitrii Sokolov for his 3rd goal of the season and Baxter, Minnesota-native Mitch McLain scored his first of the year to make it 9-2 Wolves.  Chicago would get their 10-spot when River Falls, Wisconsin-native and former Golden Gopher Tommy Novak scored to give the Wolves a 10-2 rout over Iowa.  Jones had 15 saves in the loss.  Iowa plays Chicago again this afternoon (Sunday).

RW – Nick Swaney (Minnesota-Duluth, NCHC) ~ The Hobey Baker Finalist wasn’t too happy Thursday night despite scoring a goal on 4 shots on goal as he broke his stick in anger after the Bulldogs fell 2-1 to Colorado College.  UMD outshot the Tigers’ 43-14 in the game and lost so perhaps his frustration is understandable.

RW – Matt Boldy (Boston College, H-East) ~ Hockey East’s Player of the Week the previous week continued his torrid scoring pace as he had a beautiful shorthanded goal (backhander from his knees) and an empty net power play goal in Boston College’s 4-2 win over Maine on Friday.  On Saturday he’d add another helper on the strength of 8 shots on goal in the Eagles’ sweep of the Black Bears.  Boldy leads the Eagles in scoring with 8 goals, 22 points, 4 PIM’s and is a +9 in 16 games.

C – Marat Khusnutdinov (SKA St. Petersburg, KHL) ~ The speedy, skilled two-way centerman has had a strong 2021 season, but all of that has come to a hasty and painful end as he suffered a shoulder injury that will sideline him for at least the next four months.  Tough break for the youngster, but here’s to hoping for a smooth recovery for the talented forward.

D – Marshall Warren (Boston College, H-East) ~ The mobile sophomore defenseman had an assist on 3 shots on goal in Boston College’s 3-0 victory and sweep of Maine on Saturday.  Warren has 2 goals, 7 points, 25 PIM’s and is a +14 in 18 games.

LW – Nikita Nesterenko (Boston College, H-East) ~ The skilled freshman continues his strong season as he had an assist on 4 shots in the Eagles’ 3-0 win over Maine tonight.  Nesterenko has 7 goals, 17 points, 12 PIM’s and is a +14 in 19 games.