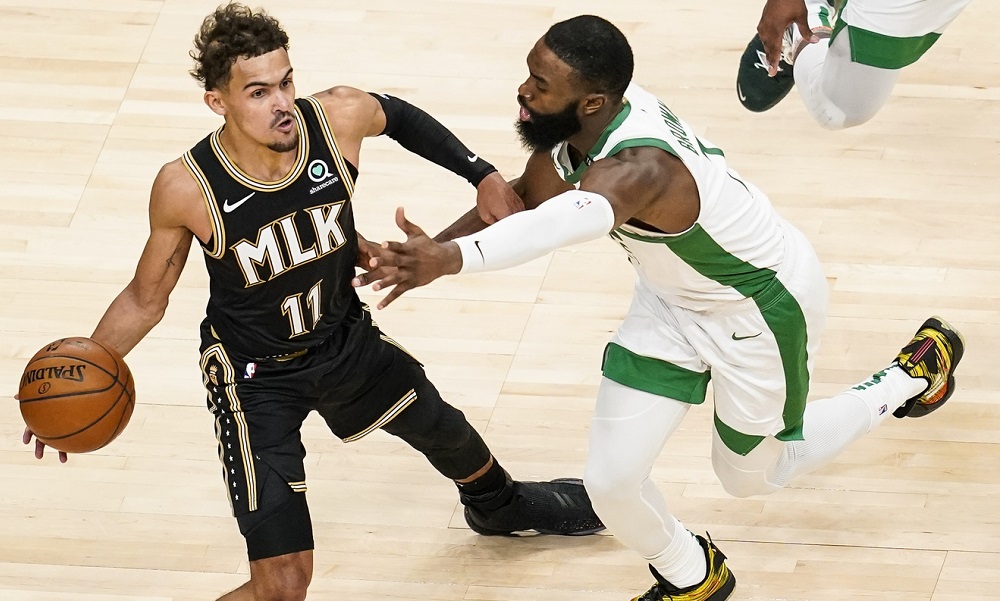 After two brutal losses on the road, it was gut-check time for your Boston Celtics. They failed it, losing to the Hawks in Atlanta, 127-112. The game was not as close as the final score would suggest.

By halftime, Trae Young had 25 points and Danilo Gallinari came off the bench to add 24, making his first 7 triples. That’s not a typo. Trae finished with 33 points on 12 of 23 shooting. Danilo topped that with 38, making an incredible 10 of 12 threes. The Hawks were 23 of 42 from the arc – the most three-pointers the Celtics have ever allowed in a game.

Jaylen Brown and Jayson Tatum failed to show up, combining for anemic 10 of 36 shooting.

This was a game the Celtics absolutely needed to win, so it was a little puzzling to see a guy who was DNP-CD for six of the last eight games in the starting five.

Jeff Teague will get the start at point guard tonight for Celtics with Kemba Walker resting.

How did it go?

I have no idea how.

Solid early highlight, and one of the few all night.

Rob throws down the lob 💥 pic.twitter.com/tXKtCKm4ke

But Trae was hot and Boston once again failed at defense.

Celtics open by giving up a 40-point first quarter. Young 17 points, 7-for-10 on basically any kind of shot he wanted.

Hawks are shooting out of their minds, but the Celtics' lack of any resistance helped them get hot.

The Hawks toyed with the Celtics.

This is the stuff that happens when nothing is going your way… pic.twitter.com/07q9Kheilh

This is accurate. But still not good.

For as tough as the last two losses were on this road trip, the Celtics showed heart. Tonight they look exhausted. Schedule losses are ok if you also, you know, get some wins.

On the bench, Marcus couldn’t take any more.

Marcus Smart was just hit with a technical foul.

By halftime, the game was over except that league rules require 48 minutes.

Celtics down 72-49 at the half. This recent funk just keeps growing worse.

The Celtics made a brief attempt to make this competitive, but things quickly shifted back to the Hawks boatracing them. Guarding Gallo would be a good idea.

The fourth was garbage time all the way.

21 threes for the Hawks.

(Quirky fact…Rondo played in both of the top two games)