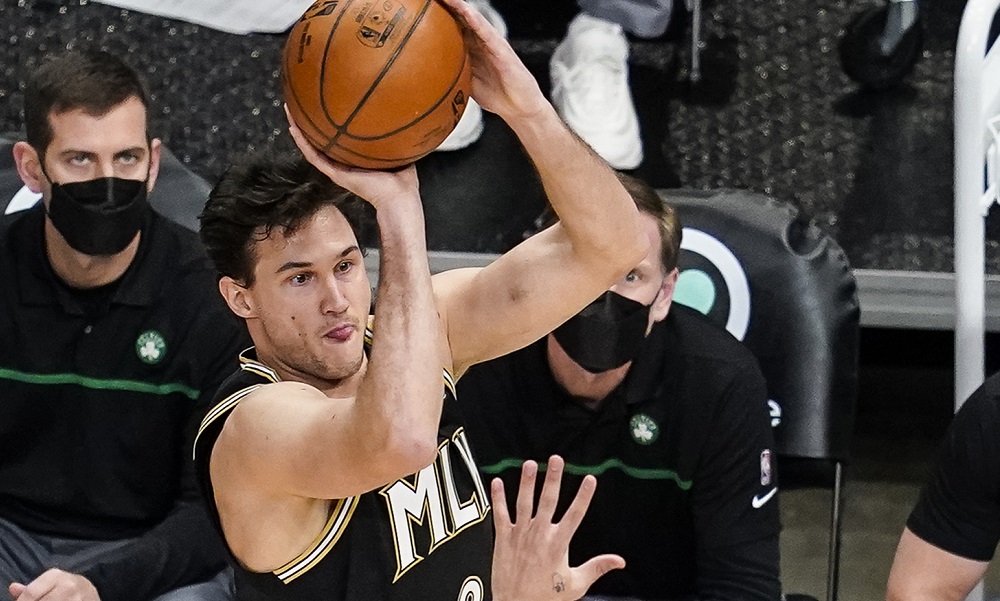 This is the regular feature where we at Red’s Army review the previous Celtics game and highlight five key factors and box score nuggets. We call it rational thoughts because we analyze with reason and logic, avoiding hot takes.

Today, however, it’s tough, because last night’s loss in Atlanta was not rational at all. Some wild things occurred. The Hawks did whatever they wanted, making shot after shot, with little to no resistance from the Celtics. Meanwhile, the Cs couldn’t throw it in the ocean from the pier.

Since you’re reading this despite all that, we’re here for you. Kudos for hanging in there during these tough times for the Celtics. 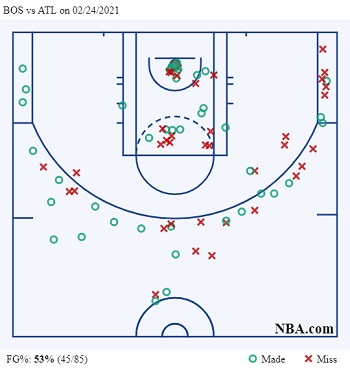 It’s truly hard to believe, but the Hawks scored a nice total of 69 points on three-point shots, making 23 of 42 (54.8%). That’s the most triples any Celtics team has ever allowed in one game. The home team hit 8 of 11 in the first quarter alone, and they never looked back. Their shot chart is ridiculous.

Aaron Nesmith and Tremont Waters combined to shoot 6-of-7 from 3-point range tonight. The rest of the team shot 2-of-24.

Danilo Gallinari was unconscious, to say the least. He made his first seven attempts from the arc and finished 10 of 12 from deep. Those 30 points alone matched the scoring totals of Boston’s two All-Stars (Jayson Tatum, 13, and Jaylen Brown, 17). Gallo finished with 38.

Hawks running it up?

The Hawks still keeping their starters in is hilarious

Not sure what sort of beef the Hawks might have with the Celtics, but they noticeably kept their starters in after the Celts waved the white flag. With 7:45 remaining and down 27, Tacko Fall and Tremont Waters came in for Boston, but Gallinari, Trae Young and John Collins kept playing until the 3:52 mark. Maybe Trae (33 points on 12 of 23) was making a statement after being snubbed for the All-Star team.

If you’re tired of seeing the Atlanta squad after three Hawks-Celtics games in eight nights, good news: they don’t meet again this regular season. The bad news is they could face off in the “play-in” tournament, if they both finish in seventh through 10th place. Ending up there would be embarrassing for the Celtics, supposedly a Finals contender, but the fact is they are in ninth place in the East at this moment.

Another negative record was set: for the eighth consecutive game, the Celtics allowed an opponent to score at least 30 points. That’s a first. Not only that, they allowed two, Young and Gallinari.

Do the Celtics miss Marcus Smart? Sure do.

A recurring theme during Celtics games is Brad Stevens’ refusal to call time when the other team is on a scoring run. Many fans think that’s a bad habit, so here’s a quirky fact for them: Last night Brad called just three timeouts for the entire game. The first one wasn’t until 10:29 remained in the second quarter, with Boston already down 47-27.

The Celtics didn’t even use their mandatory timeout in either the first or last quarter because Atlanta took two each time (which negated the requirement for Boston).

Even when the Hawks had a 20-point run that broke the game open, Brad didn’t call timeout. To be fair, though, that run took less than four minutes and was interrupted by the break between the first and second quarters. Brad hardly had a chance to ask for time. Not that it matters for the narrative.