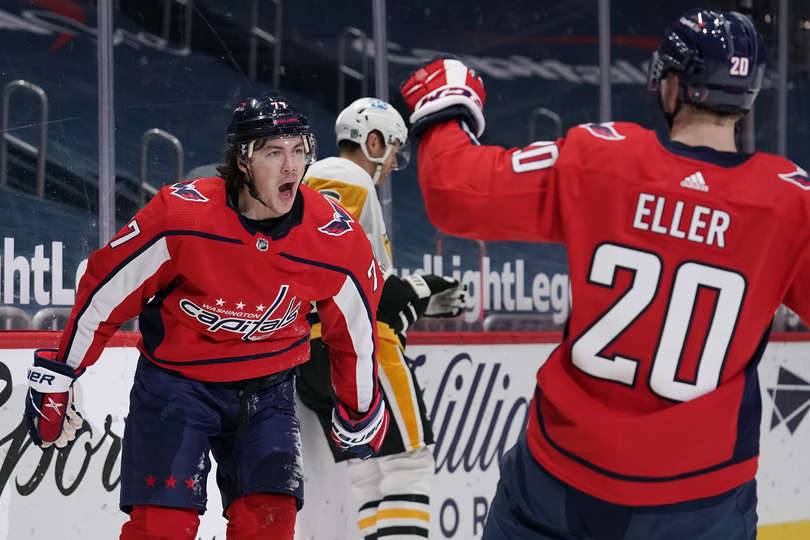 WASHINGTON, DC – FEBRUARY 25: T.J. Oshie #77 of the Washington Capitals celebrates with teammate Lars Eller #20 after scoring a goal against the Pittsburgh Penguins in the third period at Capital One Arena on February 25, 2021 in Washington, DC. (Photo by Patrick McDermott/NHLI via Getty Images)

With the way that the first 40 minutes went, you’d be hard-pressed to find anyone on the Penguins that deserved a better result here than Tristan Jarry.

The Caps absolutely lived in front of him all night and he stood tall, even if his all situations .909 didn’t scream that out. 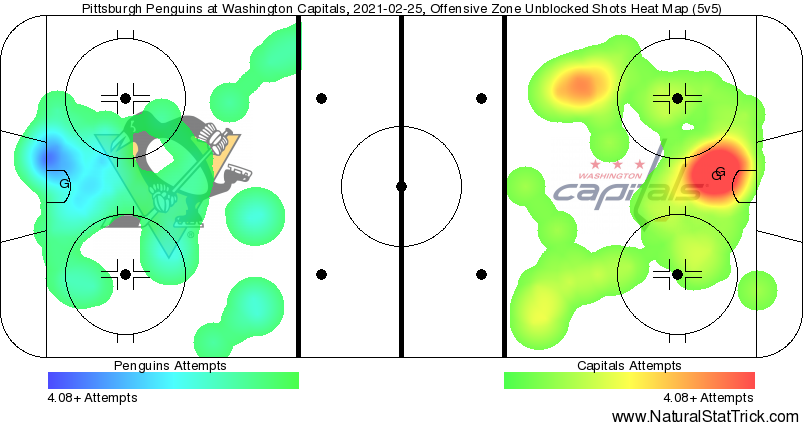 You could maybe make the case that the ZAR-Malkin-Rust line did as well, but by and large the Penguins never really had a foothold in this one.  They hung around long enough to keep it interesting and on another night, maybe they managed to pull out a 3-2 squeaker after getting crushed in possession like they did, but realistically, this was probably a deserved result.

You could make the case that 5-2 is a little unfair, but the full share of the points going to Washington was not.

An injured Jason Zucker elevated Zach Aston-Reese to Malkin’s line, while Drew O’Connor returned to the lineup on the 4th line, bumping Lafferty, Samuel up to the 3rd line.  Jarry with his 6th straight start after getting the W on Tuesday night.

For the Caps, Vanecek got another start and Conor Sheary got to play with Ovi and Kuznetsov.

Both teams traded off some big time chances early on.  Goalies seemed dialed in for what ended up being a pretty tight checking affair.  Nothing epitomized that more than POJ seeing an unlucky bounce on his neutral zone pinch turn into a 2v1 the other way, only for him to get back and tie Tom Wilson up to prevent a sure goal

All it needed was one, though.

That came in the form of Nick Backstrom halfway through, netting his 9th of the year.

The killer here was that it looked like the Tanev-Blueger-Lafferty line had something going, keeping the Caps pinned in their own end.  But towards the end of it, Tanev tried walking out from behind the net and feeding Lafferty, having it broken up and sending Washington back the other way.

Watch Tom Wilson here though.  First, he’s able to get the bounce to go his way and get it by Ceci and in deep.  Then, he’s just a one man wrecking crew of a forecheck.  Basically takes Ceci and Pettersson both out of the running for winning the puck by himself.

Ceci ends up coming out with it, but because he and Pettersson were so occupied by Wilson, it meant that the Caps had the Pens outnumbered when Ceci tried to walk out and clear.

That allowed Vrana to jump the exit pass as Tanev and Blueger collapsed to protect the front of the net.  Chara pinching down the wall set the Caps up to win the ensuing board battle and for Backstrom to come away with the puck when it was dislodged, throwing it across to Jensen pinching down the other wall.

That pass killed the Pens, who had all 5 skaters on Backstrom’s side of the ice.  Once they all shifted their focus to Jensen and tried to get back into position, it was already being put in the back of the net by Backstrom.

That goal looked destined to open shit up a bit and 20 seconds later, the Pens would get the first powerplay of the night after Eller tripped up 71.  PP looked decent, buzzing around with a lot of movement like a bunch of wolves trying to find their way inside your house, but no goals.

Pens would get another powerplay with under 5 to play because Tom Wilson’s shit baggery racked up a hit so late it came from a different, worse timezone.

All time scumbag game from the Caps in the first too.

Eller with a nice shot where the sun don’t shine on Sid pic.twitter.com/BmD32lBdg2

Nothing doing on the PP and in the waning moments, two ginormous plays kept each team from goals.

First, it was a Mike Matheson block that made sure Ovi’s dinner was gonna be cold tonight.

Then, on what was basically the last play of the period, Vanecek straight robbed Rust at the side of the net.  Unreal feed from Matheson to hit him here.

Period ended with shots 12-11 in favor of the Caps, with the Pens getting just 2 total shots on their two powerplays and the Caps controlling the bulk of the play at 5v5, especially after the goal.

And Cody Ceci put Tom Wilson on his goddamn wallet.

The powerplay was interesting.  Visually, it looked good.  The movement was nice and effective, but the Caps were really compact on the kill and, despite the movement, weren’t really showing the Pens many looks to get shots through even in the face of the Pens spending most of the PP time in the offensive zone.

Midway through the period, Vanecek stared down Rust and made a huge save to keep his team up one.  As the puck went the other way, Malkin got rung up for hooking.  Just knew Washington was getting the next one.

Caps powerplay was all about the Vanecek Show, though.  Just having himself a game, stoning a shorthanded Blueger and Tanev after Ovi vomited on himself at the point.

Pens got their 4th powerplay of the night with 4:24 left, but couldn’t do anything with it despite Malkin’s best efforts.

With the way that Vanecek was playing to this point, you just knew the next one was going to be the biggest one.

And the next one came off the stick of Timothy Jimothy on a rough play from 87 and a great individual effort from Oshie.

Puck in deep that the Caps got quickly up and sort of caught the Pens on a bad change. Crosby tried to eviscerate Oshie, but got undone by a slick give and go before taking the go and undressing Matheson.

Almost immediately after, the Pens had to go back to the PK and if the Oshie goal wasn’t the biggest moment, this had to be.

All it took was an end around that Ovi latched onto, but blew his point pass and connected only with Tanev.

Blueger makes a nice play here to drive into Backstrom to create space for Tanev to swing around Carlson, then just wait Vanecek out long enough to slip it five hole.  Game on.

Expectedly, that gave the Pens some life.

Taking some pressure, a missed bad angle shot from Dillon set Letang up to pick up the loose puck and break it up ice to Kapanen to lug through the neutral zone.

Little bank pass to himself got them into the offensive zone for Guentzel to work it to 87 below the goal line.  Head’s up play to keep the puck going up the boards to spread the Caps out defensively and even better set up play from Letang to reverse it back down.

All it needed was a little shake and bake from Jake, just dogwalking Dillon to slide to the crease and, again, beat Vanecek fivehole.

Three minutes later, though, came the backbreaker as Drew O’Connor found himself in the box for hooking up Kuznetsov.

All told, the PK looked okay.  Then Letang’s stick shattered on a blocked shot, no forward gave him a stick, and he was on an island by himself, unable to defend shit.

That shit was Tom Wilson’s stick, who drifted right into Letang’s zone to tip home the eventual game winner.  This is a spoiler.

Sully got Jarry out of the net with just under 2 minutes to play because the over was set at 6.5 and unders are for absolute losers.

Eller would add another empty netter and that’d be the ball game.

Back at it Saturday night on the Island for the first of a back to back.  Go Pens.