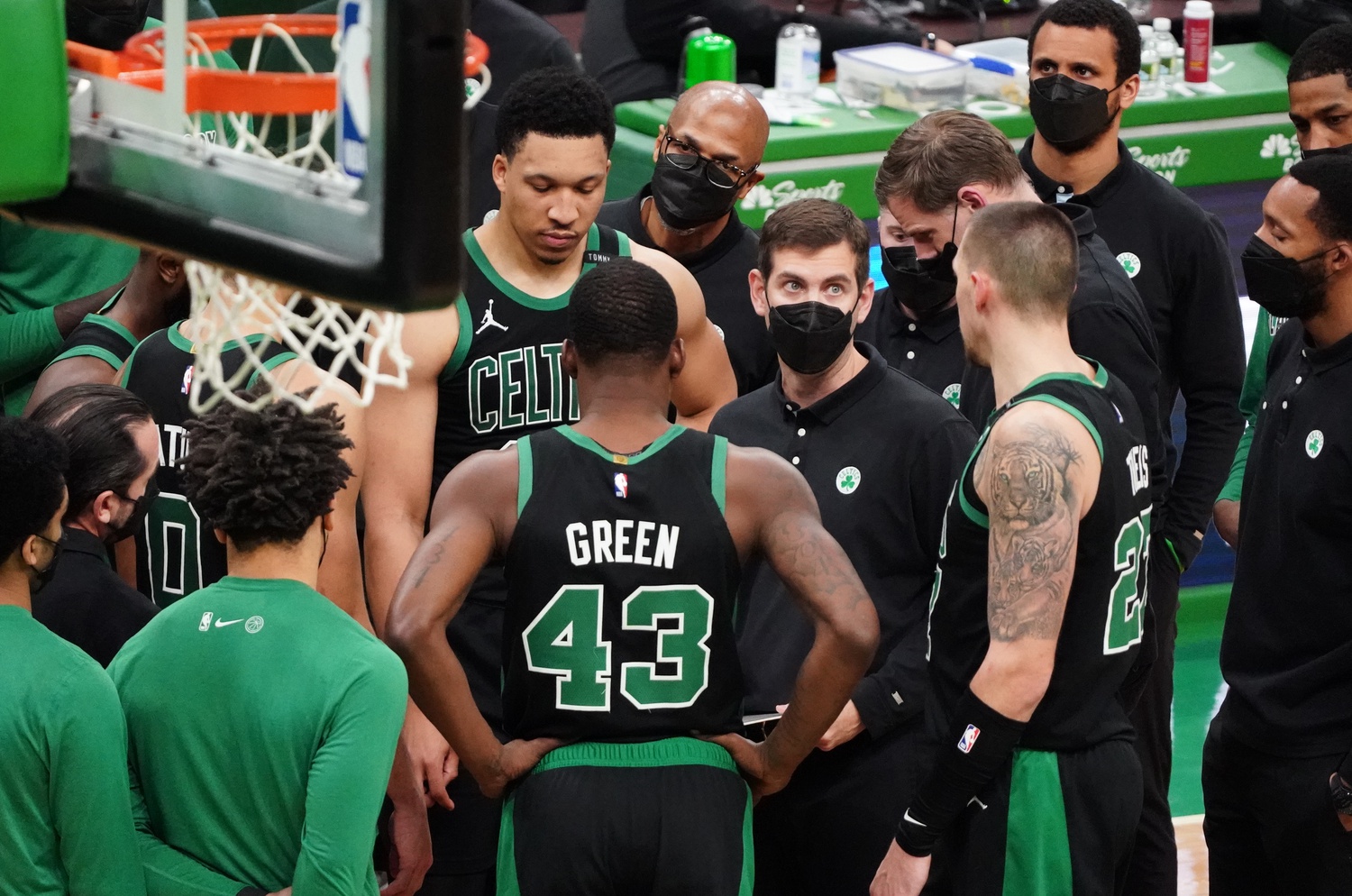 So much of the conversation around the Celtics this season has been about whether Ainge could parlay the biggest traded player exception (TPE) in league history into impact talent that could aid Boston’s title hunt, both this season and beyond.

Is the sudden shift in suggesting the team could wait until the summer simply posturing given a market thin on obvious deadline sellers? Or is Boston brass greasing the skids for the possibility of punting on immediate activity given the many question marks surrounding this team and a weird pandemic season?

There has been a fair bit of chatter here on Red’s Army, over the past couple weeks about the poor play of the C’s this season. And, to go along with that, some questioning of Stevens’ coaching abilities and Ainge’s personnel moves. Some eyebrows have been raised at the way that the front office, coaching staff and team have been rather blasé about this whole business of losing more games than they’ve been winning.

Chuck wonders if the Jays really hate losing. Mark says it’s time for some accountability. And I agree that the C’s, even as currently constituted (and limited), can play better than they have over the past week.

Perhaps it’s the contrarian in me, perhaps it’s the weird part of my mind that entertains conspiracy theories without actually buying into them because that which seems obvious is so very often also wrong (e.g. the sun doesn’t actually ‘rise’ in the east, it’s the earth’s counterclockwise rotation that gives that impression), but I think there’s something more going on here that we don’t know about.

I mean we know that Stevens has not been afraid to speak honestly about his team to the media—in the weeks leading up to the disastrous 2018/19 season, he openly said that the C’s were not as good as they thought they were. However, he’s been hesitant to criticize their recent play, and when he has it’s almost always been with qualifications. Ainge has only spoken generally of a lack of effort, while assuming most of the blame for the roster construction–he’s also talked about how you can’t go an entire season expecting your #8 player to contribute at a #5 player level.

So why aren’t these guys talking louder about the way the C’s have been playing? I mean, look at Stevens’ comments from Jay King’s article over at the Athletic:

“And so the only way I know to get that back, is to dive on the floor, is to take charges, is to sprint to help your teammates up, is to fight for every single possession,” Stevens said. “And that’s our charge. And I don’t know how to say it any more clearly than that, but it’ll be said in whatever way it needs to be said. And we just need to find – make sure that we’re doing our job.

“Listen, none of us are happy with the job that we have done, and I should be first and foremost on that list with where we are. That said, I also realize that we’re in a situation where we have a lot of guys going through it for the first time and there is a confidence to winning that you gain from earning winning. And we have a lot of guys that haven’t done that. We have some that have. And, you know, we’ll make sure that we do everything we can to earn that confidence with our work.”

And we know that Tatum’s health isn’t up to scratch. Or at least I know it. I feel like this story should have more traction than it does… The team’s best player comes back from COVID playing a very different and far less efficient game and I’m the only guy that’s noticed???? We know that Smart is out of action indefinitely, and we know that Robert Williams is on a pretty strict minutes limit due to an extended recovery from his hip issue. Plus he’s also recovering from COVID, and he probably looks as good as he does in his limited minutes precisely because they are limited.

You can talk about how a guy like Larry Bird wouldn’t be content with where the C’s are at right now if he were playing, but here’s the thing about that:

I was born in ’76. I don’t remember Larry’s dominant seasons with the Celtics. I remember a guy who was dang near crippled, who had to lay down on the sidelines to prevent his back from seizing up, who had bone spurs in his feet so bad that he couldn’t jump and could barely run–that whole ‘white men can’t jump’ notion? That’s almost entirely based on Bird’s messed up ankles and heels. He looked like a totally different player when he first hit the league. I hardly remember McHale when he was the best power forward in the game.

Their careers were more or less over by the time they were 33.

Yes, part of that is due to less sophisticated surgical and treatment techniques. But a lot of that is due to these guys playing when they shouldn’t have. McHale busted his foot in 1987. And he played through it. In fact, he’s a big reason why the C’s made it to the Finals for the fourth straight year that year. But doing that cost him, not only shortening his career dramatically, but leaving him with a limp that he still has today.

I mean, I know you can’t keep kicking the can down the road. At some point in time, this team has to deliver on its potential–and that includes Ainge and the coaching staff. We know what they’re able to do with a team of castoffs, rejects and overlooked guys. We want to know what they can do with first-rate talent now that they have it.

But at the same time, you can’t ask these guys to compromise their future health for the here-and-now. And you don’t even have to go back as far as Larry Bird to have an instructive example. Isaiah Thomas will do.

I haven’t had conversations with Ainge or Stevens, but they’d have to be pretty damned cold not to look at where IT is right now and feel a measure of guilt. I mean, yeah, IT probably should’ve said more about how he was feeling, but at the same time, there had to be signs that he was struggling more and more with his hip. And even if Stevens and Ainge were objectively blameless in the IT scenario, it still has to eat at them a little bit.

So if they’re not pushing Tatum and Williams to potentially scar their lung tissue and permanently lose capacity (it happens–it happened to me with a bout of childhood pneumonia), if they’re not rushing Marcus Smart back, it’s not necessarily because any of these guys do not sufficiently hate losing.

I like auto racing. A few years back I compared the C’s to a Ferrari. But I’m going to extend the analogy… When you’re designing a car to win a race that’s 24 hours long, you expect that some things are going to fail or need replacement. One of the reasons why Ford won four consecutive races in the late ’60s was because they designed whole chunks of the GT40 for easy replacement. If an individual part failed, say on the suspension, they could replace the entire suspension assembly in less time than it would take to switch out the broken part. So you go into a race like that anticipating issues.

But at the same time, you also realize that if you have too many issues, it doesn’t matter how well you’ve prepared for each one.

At this point, I really don’t care where the C’s finish the regular season (I never did, to be honest, but more because I expected the C’s to struggle early). I sincerely hope that they are close to full health by the time the playoffs get here, and if they are fully healthy by then, I don’t think it will matter where they’re seeded. But if the end of the season rolls around and they’re still cursed by injuries and illness, I mean, what can you do? Get mad at them for being ill or injury-prone?

Page 2: Where why not? Let’s let fans back into the games

The TD Garden will be welcoming back fans into the arena for Celtics games this spring.

On Thursday, Governor Charlie Baker made the announcement that  sporting venues in Massachusetts can reopen at 12 percent capacity starting on March 22nd. The first Boston Celtics home date with fans would come on March 29th in a matchup against the New Orleans Pelicans.

I guess our response to COVID is that we’re going to gradually turn it into an acceptable bit of background noise in our daily lives. This makes me wonder why we even bothered to spend the last year taking extreme measures to avoid it. I mean, hell, it’s not like treatment of the illness has made incredible strides over the past eleven months. And we don’t have any kind of long-term data on the efficacy of vaccines that were only released two months ago and which are still limited to people 65 and older among the general public. But whatever, I guess.