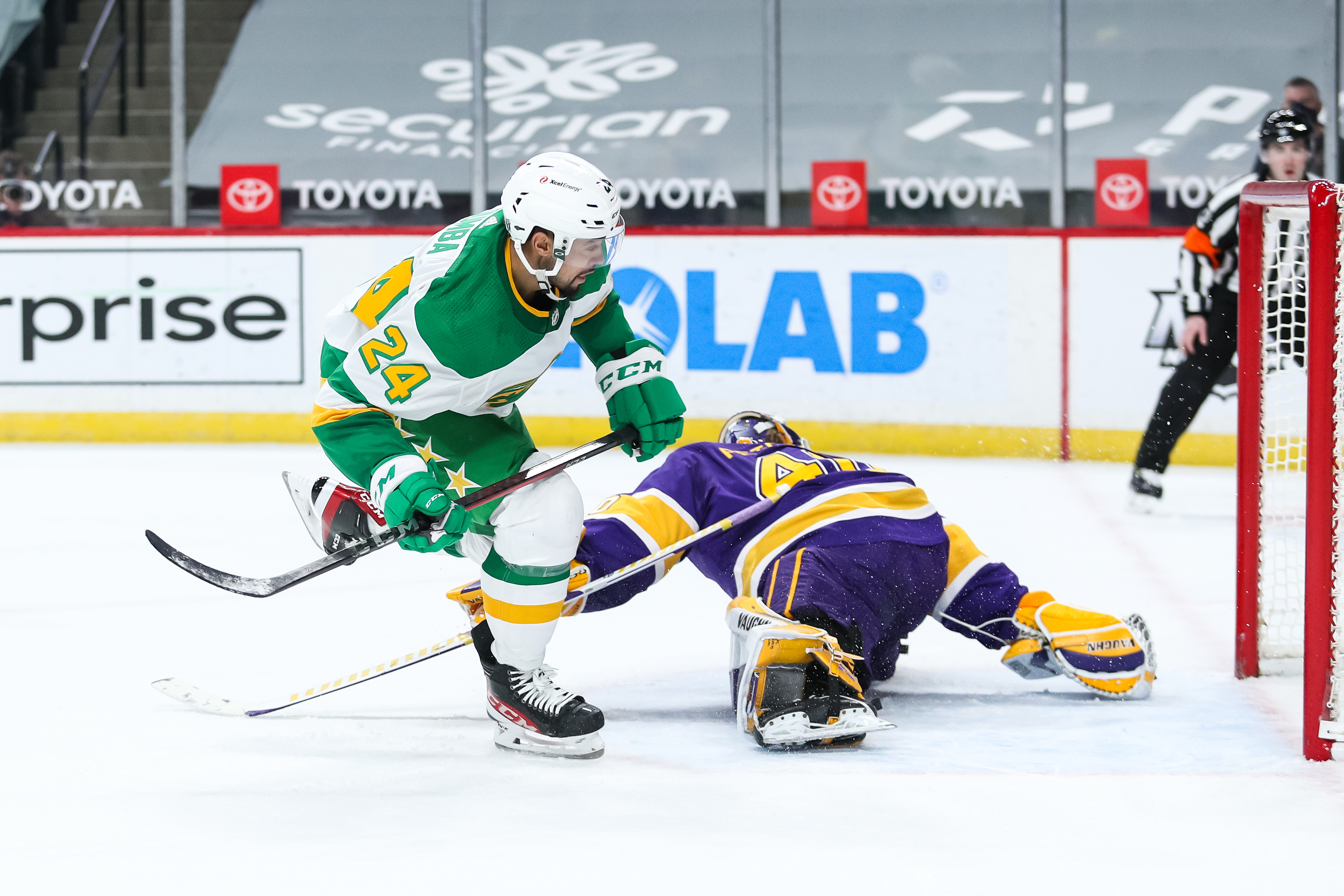 Happy Hockey Day Minnesota everyone!  The annual celebration of Minnesota’s proud hockey history started back in 2007 and while the pandemic has forced them to change up the format it is still a chance to celebrate all levels of the game and the people who exude their passion for hockey.  It should be no surprise that the team is going to use its Adidas Retro Reverse jerseys for this game as a way to give a nostalgic nod to Minnesota’s NHL history.

Hockey Day Minnesota has also brought its share of memorable finishes, including 2014 where Elk River’s Nate Prosser scored the overtime winner against Dallas the same year his hometown was the event’s host.  Could it get any better than that?

The 1st period had a slower start than Friday’s game where the Minnesota Wild were flying all over the ice.  The Kings were still playing their passive 1-3-1 trap, but instead of attacking it with speed like they did on Friday the Wild seemed to want to methodically skate through it instead.  Minnesota would break the stalemate as Kevin Fiala ripped a shot that was partially deflected by Joel Eriksson Ek and the puck would flutter up into the air and Ek hacked down at the puck to bat it into the back of the net.  It was 1-0 Wild, which was a bit surprising since the replay clearly showed Ek’s stick preventing Cal Petersen from being able to catch the puck which one would think would be an easy goaltender interference challenge but none came from the Kings’ bench and the goal would stand.  Minnesota would add to its lead a few minutes later as Nick Bjugstad swung a pass across the crease to a crashing Nico Sturm who chipped it into the back of the net to give the Wild a 2-0 lead going into the 1st intermission.

Minnesota would pick up where it left off with a stronger latter half of the 1st as the Mats Zuccarello, Victor Rask and Kirill Kaprizov line would dazzle with their ability to mesmerize opponents with their shiftiness and terrific passing.  It was Rask finding Kaprizov moving through the slot and the Russian fired a shot against the grain that beat Petersen to make it 3-0 Wild.  It appeared as though the Wild were on their way to another rout, but at this point the Wild started to believe in their own hype and became way too fancy with the puck.  Instead of working their way in close, they seemed to want to set up some kind of pretty finish which more often than not resulted in a turnover that gave the Kings a chance to counter attack with.  The ice would shift into Minnesota’s zone, and they found themselves chasing after the Kings and this would lead to penalties.  A boarding call on Carson Soucy gave the Kings a power play and they’d take advantage of it as Adrian Kempe‘s shot forced a big leg pad rebound by Kaapo Kahkonen that was pounced on by Drew Doughty who drilled a shot by the Wild netminder before he could recover.  3-1 Wild.  The goal only encouraged the Kings to keep up their attack and the Wild’s penchant for overhandling the puck continued to lead to lots of needless turnovers.  The Kings would add another goal a few minutes later as the Wild were swarming in the Kings end, when a Jonas Brodin shot from the point was blocked and this led to a breakaway for Austin Wagner who raced in and he’d fire a shot over the shoulder of Kahkonen.  3-2 Wild going into the 2nd intermission.

Minnesota had some chances on the man advantage to add to their lead, most notably when Jordan Greenway‘s power play tally was waived off when it was determined he interfered with Petersen as he tried to cover up a loose puck in his crease.  The Wild would sit back and attempted to defend their lead which made for a nail biter of a game of close calls and desperate saves by Kahkonen.  Minnesota appeared to be on their way to another win when Bjugstad was called for hooking late in the period.  The Kings would take advantage of the power play and they’d move the puck around well before setting up Kempe for a one-timer that seemed to fool Kahkonen who had lost track of the puck with Brodin going across his sight line at the wrong moment and the puck found the twine behind him.  Tie game 3-3 and the game would go to overtime.

In overtime, both clubs were predictably cautious and waiting for the right moment to press the attack.  For the Kings it was when Andreas Athanasiou got onto the ice where he used his blazing speed to get a step on Wild defense for a quality chance that was fought off by Kahkonen.  Minnesota would take their own chance as Kaprizov used his speed to split the Kings defense and he’d draw a holding call on Jeff Carter which gave the Wild a 4-on-3 power play.  Minnesota’s 4-on-3 was painfully predictable in terms of its puck movement and despite setting up Fiala and Jared Spurgeon for a few one-timers nothing really threatened Petersen all that much.  After the failed power play the game seemed to be destined for a shootout when the Wild tried one last rush and it was Mats Zuccarello drawing the Kings defense towards him and he’d spin out of a check to swing a pass into the middle of the ice to Matt Dumba.   Dumba moved in and went forehand to backhand and beat Petersen with just .3 seconds left on the clock to give the Wild its most incredible Hockey Day Minnesota memory yet in a 4-3 overtime victory.  Kahkonen had 25 saves in the win.

Minnesota now sits in 2nd place, one point behind their next opponent the Vegas Golden Knights.

What did you think of the Minnesota Wild’s series against the Kings?  Tell us on Twitter @CreaseAndAssist! 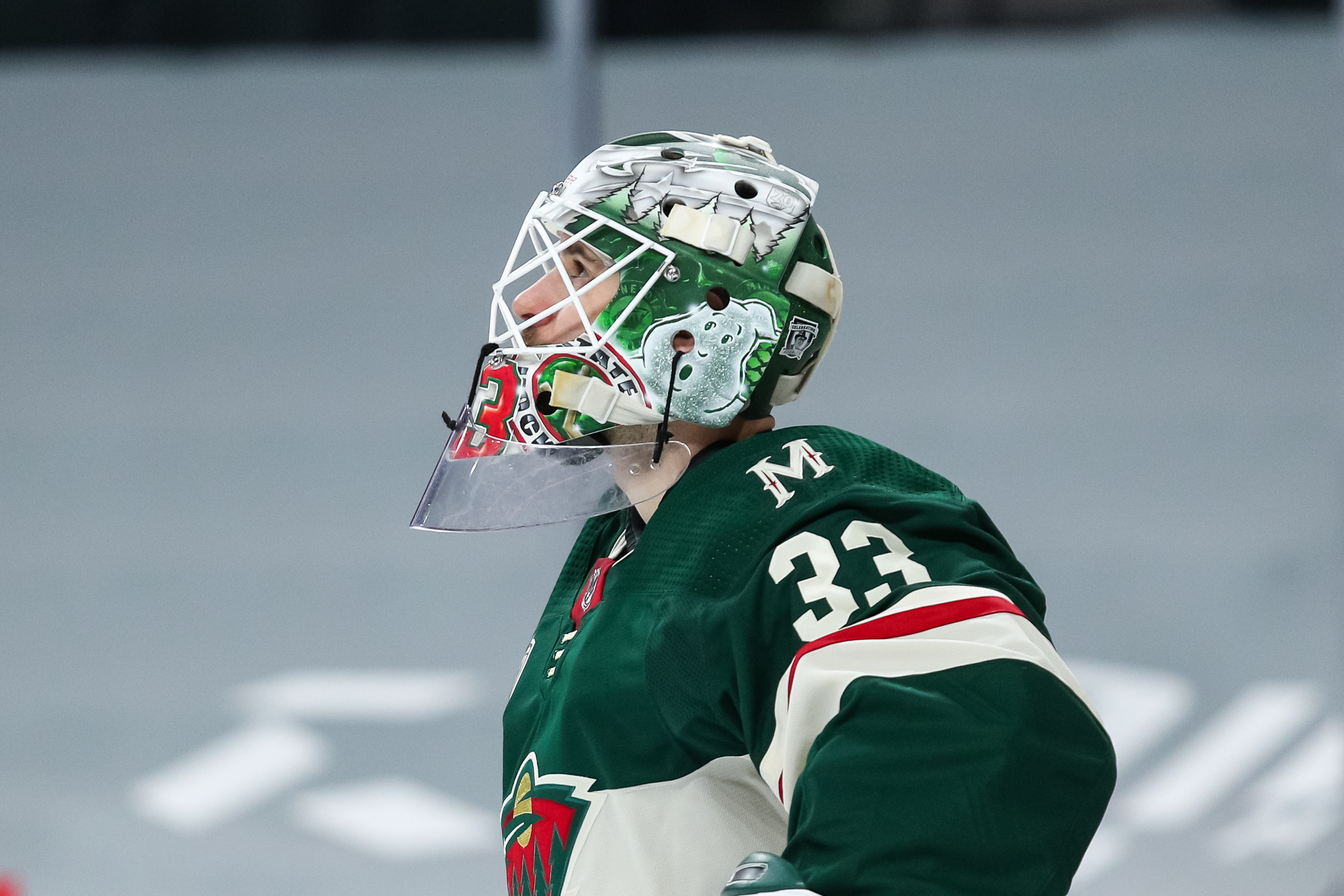 Cam Talbot Picks Up Where He Left Off

After getting injured and then having to be placed on a Covid quarantine, the goaltender acquired to be the team’s starting netminder was forced to sit and wait.  He even went as far as getting a hotel room for himself so he wouldn’t pass on Covid onto his family, so the wait was a solitary one.  It could not have been fun, yet the Caledonia, Ontario-native returned to action and didn’t even appear even a little rusty.

Talbot was calm, cool and collected as he gave up just one goal on 28 shots, earning 1st star honors in the Wild’s 3-0 win over the Kings on Friday night.  Rebound control was excellent, his glove hand was sharp and his post to post movement was crisp and precise.  Although Talbot noted he was appreciative of the strong defensive effort the team gave him, especially early in the game which gave him time to feel comfortable.  The fact he was given the initial start to this latest series against the Los Angeles Kings, is a sign from the coaching staff that the crease still belongs to Talbot.

Kaapo Kahkonen has been terrific in Talbot’s absence, sporting a .944% save percentage to help the Wild win its previous 4 games.  But he also got credit for helping his team break out of the zone easy by his ability to play the puck effectively.

“His ability to move the puck helps a lot of the breakouts.  He’s dynamic in the way he competes for the puck, sees the puck, to sprawl across the net.  He’s really athletic and made some really, really big saves for us at big times in the game, too.” ~ Wild alternate captain Zach Parise in talking about Kahkonen’s strong play.

His strong performance gives the team some tremendous confidence knowing they have at least 2 capable goaltenders they can go to.  To top it off, Alex Stalock is back practicing again with the team which means the team has a bit of a logjam in its crease.  My partner in crime Theresa Ferries talks about what Stalock’s return means to the Minnesota Wild in tonight’s game preview and she gives her own thoughts as to how the organization should handle it.

The Iowa Wild had its own Covid-related hiccup to their season as Wednesday’s game was postponed.  The team still traveled down to Austin to face the Texas Stars.  Iowa was flying out of the gate as they were peppering Colton Point with shots.  The Wild would break the stalemate in the latter half of the period as Mitchell Chaffee‘s chance created a rebound that Mitch McLain pounced on to give Iowa a 1-0 advantage.  Texas would answer back just two minutes later as Cole Schneider found the back of the net on a shot from the point that tied the game at 1-1 despite the fact Iowa was outshooting the Stars 18-6 through the 1st period of play.

Texas would take the lead as Ryan Shea found Derek Barach with a long pass and he’d race in and beat Dereck Baribeau to make it 2-1 Stars.  Iowa would respond with a goal off the rush as Connor Dewar would sweep up puck off a board battle and turned on the jets to get a step on the Texas defense and he’d snipe a shot by Point.  Texas would strike late in the period as former Kitchener Rangers’ star Adam Mascherin ripped a shot from the slot that Baribeau had no chance on to give the Stars a 3-2 lead going into the 3rd period.

Iowa would tie the game just 24 seconds into the 3rd period as Calen Addison sniped his 1st AHL goal to get the Wild going.  With the game now back in the balance it was all about which team was going to make a crucial mistake.  The Wild would be on the power play and it was Chaffee blasted a rocket of a shot from the point that beat Point cleanly to give Iowa a 4-3 lead.  Mason Shaw would score an empty net goal to seal a 5-3 victory.  Chaffee had 3 assists on the night and Gabriel Dumont had two helpers of his own.  Baribeau had 30 saves in the win.

G – Filip Lindberg (UMass, H-East) ~ The Finnish-born goaltender had 29 saves in UMass’ 3-2 OT road win over Boston College on Friday night.  This improves Lindberg’s record to 4-1-3 with a 1.46 goals against average and a .945% save percentage with 2 shutouts.