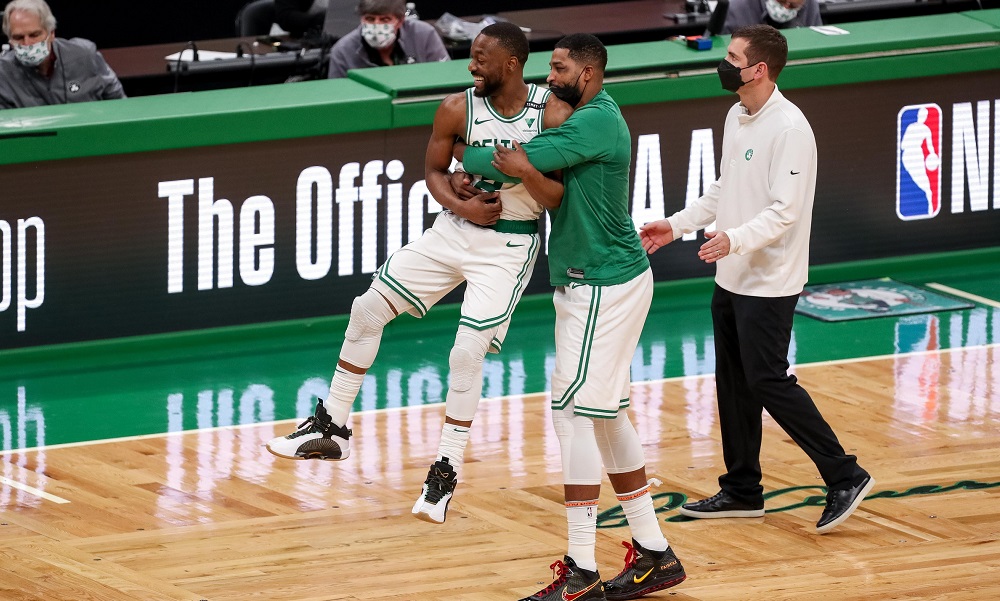 “I would say that when you go through the first part of the season that we’ve gone through where you’re treading water in a lot of ways, you have a better chance of your team ripping apart,” Stevens said. “And that’s all we’ve talked about, just stay together. Our greatest legacy that we’ll leave no matter how many games we win is how we treat each other in these moments, and how we stay together so we can ultimately be as good as we can be.” […]

And when the team just needed a win, any kind of win, this is how they pulled it off.

“It’s good to get a win on a day that ends in Y right now. That’s all I can say,” Stevens said. “It’s just good to get a win. And I don’t care how we did it, other than, stay together, play together, doesn’t matter who’s having an off night, doesn’t matter who’s having a great night. It’s about our team finishing it and figuring out a way to win.”

Boston Sports Journal: Karalis: Boston Celtics find a way to stay together when the noise threatened to rip them apart

Jeff Teague said the Celtics locker room has gotten even closer despite the teams struggles: "It's funny how you get closer after losses than you do when you are winning."

Last night, I wasn’t able to watch the Celtics game live, so I recorded it to watch later. I avoided getting any score updates, but not long after tipoff time, I accidentally saw a tweet that hinted the Celtics were already being pounded by the Pacers.

Later, I fired up the DVR while expecting the worst. Sure enough, in a flash the deficit was 18-4. Indiana was making every shot, the Celtics missing just as many. Agony.

But suddenly, Kemba Walker started hitting his threes, weaving to the basket, drawing fouls. He had 10 points in the quarter and looked like his old self.

With the extra day of rest at his disposal, Walker has looked fresher on the court. And the numbers back it up. Incredibly, in four straight games after sitting out a back-to-back, Walker has recorded a season-high in points.

Then the second unit came in, and everything got even better. From the same article:

Against the Pacers, the Celtics bench gave top-notch effort throughout the contest. Jeff Teague looked rejuvenated en route to a 14-point outing. He aggressively drove to the rim and tied for a the team-high in free throw attempts with eight.

Payton Pritchard made some nice effort plays and hit some critical shots, especially in the first half, to help the C’s keep pace with Indiana.

Most impressively of all, Robert Williams continued to play at a high level. Williams provided boundless energy and made tons of plays near the rim on both sides of the ball. He finished the game with 14 points, 11 rebounds, four assists, three blocks, and a steal and cemented his spot as the best center on the team.

By the end of the first, Boston held a 32-31 lead, and my mood had become optimistic. After four quarters, the weight of losing three straight had been lifted. Instead of finding a way to lose, the Celtics had stuck together and won.

“We just stayed together,” Kemba Walker said. “Especially when early on in the game when those guys started out hot, we never put our heads down. We just kept building each other up.”

That was one of 13 references to staying together from the Celtics after the game. Each postgame participant (Walker, Robert Williams, Jeff Teague, Brad Stevens) had some variant of that sentiment to share.

It was great to see the cohesiveness that had been missing all week. Possibly Definitely, they heard all the doomsday talk and calls for firing Brad from many fans and media. And they took that personally, because they expect even more from themselves than we expect from them.

Against the Pacers, the Celtics played noticeably harder than they have recently, tightening their defense (Indy shot 39.3%) while shooting better than usual (51.2%, and that’s with Jayson Tatum struggling again at 4 for 18).

The bench scored 39 points, Teague surprisingly made an impact, and Timelord was everywhere.

Finally, Daniel Theis had a mostly unnoticed clutch performance on offense, shooting 6 for 9, with two triples, for 17 points. One of those threes may have been the biggest bucket of the night, giving the Celtics a 6-point lead with just 36.4 seconds remaining.

Seeing all that makes us think that maybe these Celtics still have it in them to make this a memorable season. The East is so bunched up that this one win moved Boston from 9th place to 7th, and just a half-game out of 4th. It should help that their next three games are at home. After the midseason break, they will play 19 of 36 remaining games in the Garden. And Marcus Smart will be back.

But don’t get too excited yet. Tomorrow, the Cs play the Wizards, who easily handled Boston two weeks ago and have won six of their last seven. Meanwhile, the Celts haven’t won two in a row since they took down the Cavs and Bulls on January 24-25.

Staying together, playing hard, and finding a way to win is good stuff. Can they do it again?

Globe: After struggling to find a comfort zone, Celtics’ Jeff Teague went back the gym for some extra work and it’s paying off  |  ‘I don’t think we win the game without his will,’ coach Brad Stevens said of Kemba Walker, and other observations

The Athletic: ‘We’re all in this together’: Celtics’ young stars try to navigate rough stretch

ESPN: Boston Celtics back on winning track thanks to Kemba Walker’s big night

On Page 2: Figure it out, Danny

Both Boston Celtics co-owner Wyc Grousbeck and president of basketball operations Danny Ainge suggested this week that the team might be better off waiting until the summer to utilize a $28.5 million traded player exception. […]

Waiting until the summer feels like a dangerous tight rope, and one where sellers know the Celtics must utilize the exception before it vaporizes. This would seemingly only drive prices higher. This is why we’re suspicious that Ainge is using the benefit of time as leverage in any potential deals now.

We’ve said it repeatedly: The Celtics should not make a deal just to make a deal. But this roster, by Ainge’s own admission, clearly needs an infusion of talent — if only to ensure the Jays don’t get frustrated by the youth around them. Then, with a healthier Marcus Smart and Kemba Walker, this team might not be as far off from getting back on track as the past few games have suggested. […]

But it feels vital to infuse some additional talent onto this roster before the deadline. Ainge missed the mark with his veteran offseason additions. Maybe Thompson ramps it up but this team needs more pieces it can lean on in an eight- or nine-man rotation. Heck, they might need more impact talent just to survive the brutal second-half schedule then figure out their playoff rotation based on what they saw.

NBC Sports Boston: Forsberg: Ainge waiting until offseason to use TPE is a dangerous game

In all that time, Ainge never went all in to get someone who could put the Celtics over the top. There were good reasons not to go after Kawhi and Davis, and we understood that. Danny was bold in getting Kyrie, but it backfired. It doesn’t matter why, the bottom line is, we’re still waiting, and he still hasn’t found a way to get the difference-maker.

Another thing we’re waiting for: It’s been six years since Danny made a move to acquire a player at the trade deadline. SIX YEARS. That player, in 2015, was Isaiah Thomas. And now Ainge has the TPE, yet might make us wait longer.

If he doesn’t use the TPE by the trade deadline (March 25), what is likely to happen? Maybe the Cs can get themselves straightened out to make some noise in the playoffs, but eventually they’ll be like the proverbial definition of insanity: doing the same thing over and over and expecting different results.

This team desperately needs an injection of talent and energy (and a Gordon Hayward replacement). Danny knows this. To sit on the TPE would be like surrendering this season. He can’t just “get close” to making a deal (also, he needs to stop saying something was “close” or I’m going to scream). We are done waiting. Figure it out, Danny.

And, finally… No rest for the weary

With Kevin Durant unavailable to participate in the NBA All-Star game on March 7, Boston Celtics star Jayson Tatum will replace him in the Eastern Conference starting lineup

Tatum has been selected to play for the second straight season, Tatum will participate in the game which is being held in Atlanta.

Good news for Tatum that he gets to add “All-Star starter” to his growing resumé. The bad news for him and his All-Star teammate Jaylen Brown is that they actually have to go and play in this unnecessary game.

First of all, the only reason to have this contest is to provide content for television. The NBA could’ve chosen the All-Stars, given them a pat on the back, and stopped there, because why take risks in a pandemic? Instead, they’re going ahead with a modified All-Star Weekend so that TNT gets something in exchange for the big rights fees it pays to the league.

Second, The Jays are both worn down, probably more than anyone on the Celtics. They could use several days of rest to come back refreshed for the second half of the regular season. They won’t get it.

Last year, Nick Nurse played Kemba major minutes on his sore knee, and the point guard hasn’t been himself since. This year, the coaches are Doc Rivers and Quin Snyder; let’s hope they understand how to substitute early and often.