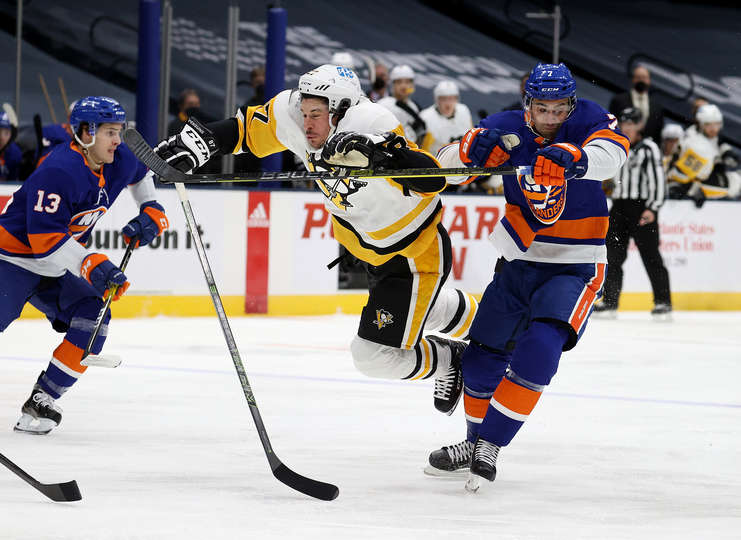 UNIONDALE, NEW YORK – FEBRUARY 28: Sidney Crosby #87 of the Pittsburgh Penguins is checked by Jordan Eberle #7 of the New York Islanders during their game at Nassau Coliseum on February 28, 2021 in Uniondale, New York. (Photo by Al Bello/Getty Images)

Rejoice! The Penguins don’t have to play the Islanders again for over a month. The Isles’ defensive, grind it out style was on full-display Sunday night as they played a perfect game against the Penguins.

This was one of the worst hockey games I’ve ever watched. Nothing about it was exciting or enjoyable. The visitors looked tired and disinterested.

The Penguins have enjoyed a solid record against the Isles this season, but that doesn’t make the matchup any easier to enjoy.

Per Natural Stat Trick, scoring chances were 29-19 in favor of the Isles to go along with their 17-9 advantage in high-danger chances.

Putting up nearly four expected goals, per Evolving Hockey, the Isles spent a good portion of the game getting looks in the most dangerous areas of the ice.

No changes for the skaters.

Casey DeSmith made his first start in goal since February 11th.

Wahlstrom doing a little shopping in the TOY DEPARTMENT! pic.twitter.com/oYmasiXqUO

The Isles tallied first with less than half a minute remaining in the opening frame when Oliver Wahlstrom ripped a one-timer past DeSmith.

It was a fitting end to a period in which the Penguins mustered all of 2 shots on goal. They had no answers for the Isles’ forecheck and it was a trend that continued all night.

J.G. Pageau scored the only other goal of the game toward the end of the second period.

Sidney Crosby was on the ice in an attempt to spark some offense despite being down a man, but all that resulted was Pageau being left alone in the bumper position to fire a shot past DeSmith.

You’d like to see DeSmith come up with the save on this one, but he was rather solid throughout the game and the Pens could’ve done a better job contesting Pageau.

The Penguins did play their best period of the game in the third period, but it was still a far cry from what would be considered a solid performance.

Captain Crosby got into it with Anthony Beauvillier and threw a couple of checks to try and energize his team, but ultimately they were unable to strike on New York netminder Ilya Sorokin.

The Pens are back in action Tuesday night for their first of three consecutive bouts with the Philadelphia Flyers.