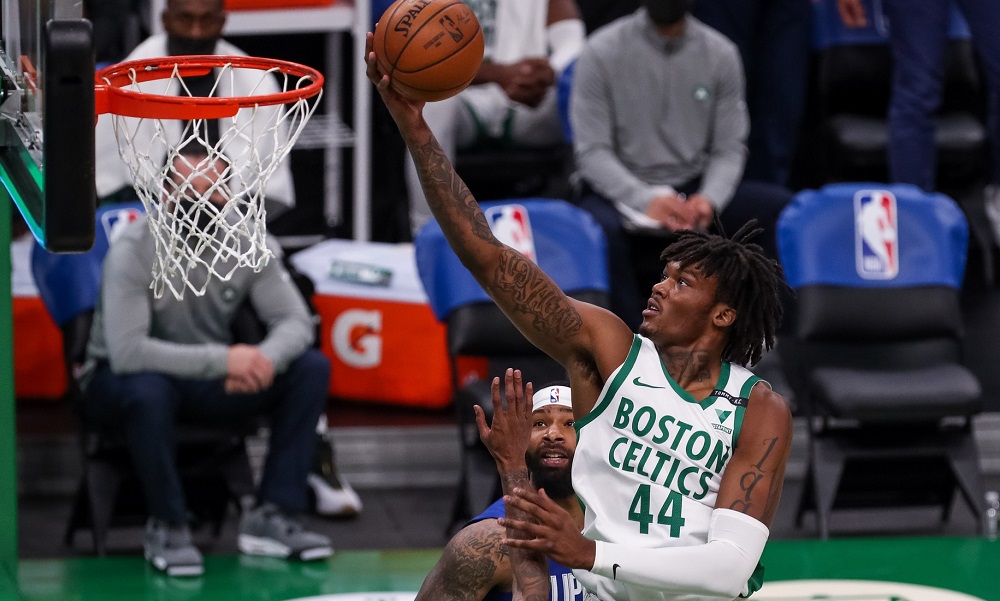 If you enjoy wild, back-and-forth games with insane shot-making and drama, this was your night. And if you also wanted to see Rob Williams have a coming out party on national TV (TNT), that was your cherry on top.

The Celtics beat the Clippers, 117-112, a game with 16 lead changes and 11 ties. Boston has now won three straight to go back above .500 (18-17). Kemba Walker, back to his old self, led the scoring with 25 points (including 6 threes) with 6 assists. The real star, however, was Timelord, who had 13 points, 8 rebounds, 4 assists, 3 blocks and several eye-popping highlights in 22 minutes. Daniel Theis hit two clutch free throws with 10 seconds left to seal the win.

The Clippers got 32 from Paul George (but he shot 2 of 10 in the fourth) and 25 from Reggie Jackson, who stepped up after Kawhi Leonard was a last-minute scratch.

My memory may be a little off, but it certainly feels like the Celtics and Clippers play a back-and-forth game with absolutely no defense but a whole lot of highlights every year right before the All-Star break.

Clippers’ Kawhi Leonard is out tonight against the Celtics with back spasms.

Strong start for Tristan Thompson — 7 points on 3-of-3 FG in the opening four minutes.

Brown's knee apparently fine. 3-3 for 7 points in his first 4 minutes.

Great ball movement and even better movement off the ball go start the game tonight.

He's back up now. Was wobbly as he stood up and is having a tough time walking. Has stopped twice on his walk back to the bench. Surely will get a concussion test. https://t.co/VnvuuWF9Tv

I think this 👇🏻 is what bothers a lot of Celtics fans; if the other team is unable to stop something, why stop going to it? #Celtics ☘️ https://t.co/qwl2ejP8jC

Law of averages setting in as the Clippers start the second half by missing 5 wide open threes.

Marcus Morris suffered a concussion and will not return tonight.

Whatever happens happens, i just know this same team Woulda been down 40 a week ago to a team like this

The Celtics are mostly playing great defense, the Clippers are just making some absurd shots

Wait, is the 3-point contest TONIGHT?

Clippers made sure Tatum wasn’t going to beat them. They are collapsing throwing doubles. Playing up on his chest. He needs to stop settling and be patient. Move the ball if it’s not there

Biggest shot of the night from Tatum there as he's been ice cold.

Tatum with possibly his first open look of the night

Celtics burying LAC in the fourth, perhaps the only team worse than Boston in the clutch

But the Clippers hung tough.

Oh boy that was a dumb foul by Theis

And they did. Paul George misses a 3 and Robert Williams – who Brad Stevens has played over Daniel Theis and Tristan Thompson down the stretch – corrals the rebound. https://t.co/nyv8dyZnj1

After Robert Williams goes 1-2 at the line, Paul George winds up hitting a corner 3 with 10.9 seconds left, putting Boston up two with the ball – an eerily similar situation to the one the Wizards were in Sunday. Unlike that game, though, Celtics call timeout. Now have none left.

Two clutch FTs by Daniel. He's got Theis in his veins.

PG misses a 3 from the top of the key and that will do it, as Kemba gets fouled with 4.1 seconds left#Celtics #Clippers