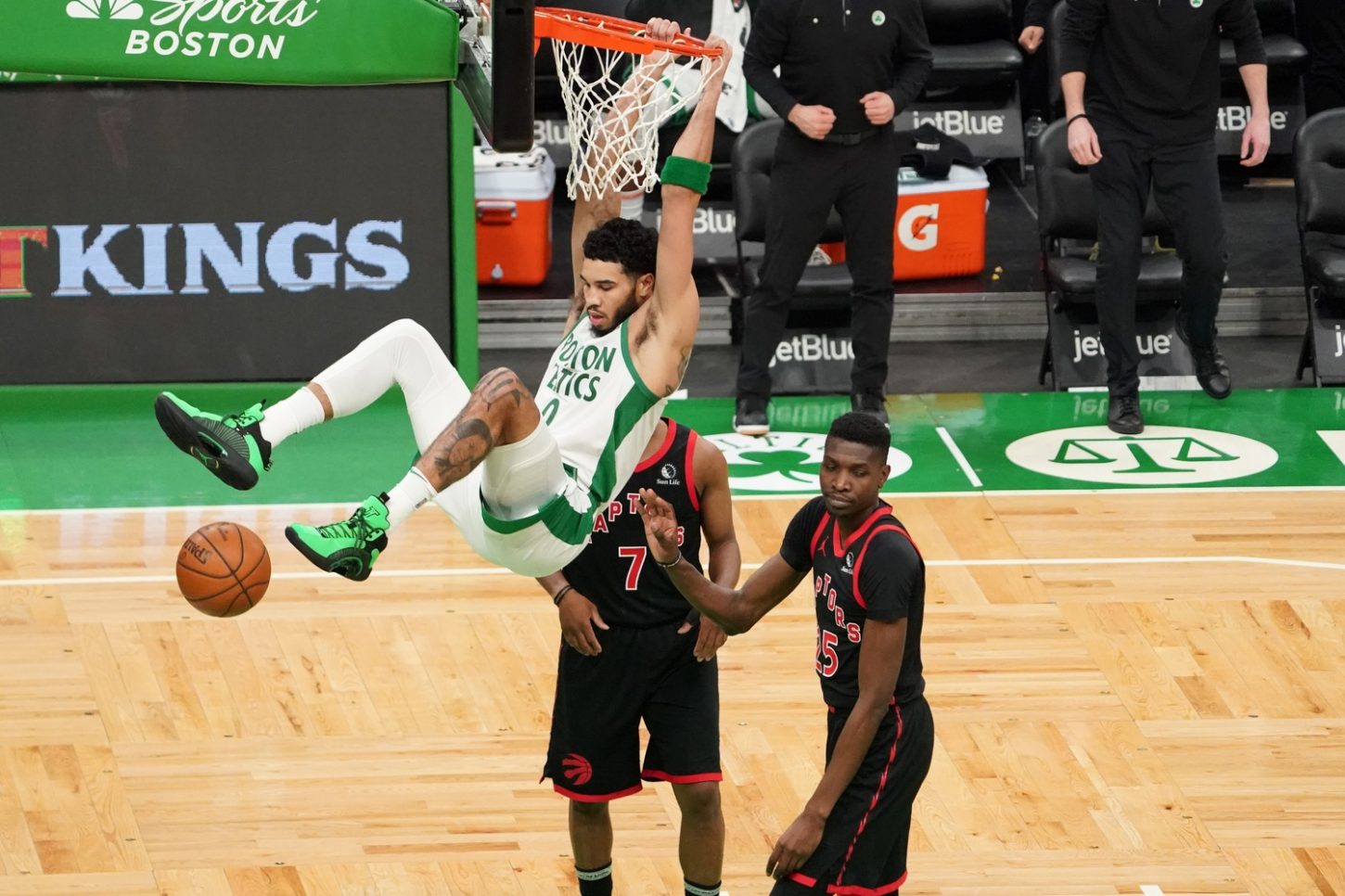 There are ways you could nitpick the Celtics’ latest win, some of them valid (Toronto missing key players like Siakam and VanVleet, Boston’s sometimes-questionable perimeter defense and clumsy turnovers). You could nitpick all four of their latest wins, especially over the Wiz. And I’ll do a bit of that, but nevertheless, you can’t overstate how important it was for Boston to rack up this streak and close the season’s first half on a positive note.

I digress. Let’s stay focused on key takeaways for this game:

Boston wasn’t abjectly bad in the first half of this game. Kemba Walker could score with ease; Jayson Tatum and Tristan Thompson seemed to have fairly open driving lanes and post opportunities, respectively. But Toronto was definitely the better team. Norman Powell, Chris Boucher, Stanley Johnson (groan) and Terence Davis (deep sigh) bombed away from three with little resistance. At the very least more attention should’ve been paid to Powell and Boucher, the latter of whom was dangerous anywhere on the court. Kyle Lowry didn’t score a ton but was a peerless facilitator, racking up assists like it was nothing. He had 18 for the game, 7 less than the Celtics amassed as a team. Turnovers also plagued our heroes, some of them truly yikes-inducing. (Kemba and Rob Williams passed to nobody what felt like a million times; 10 was the actual number.)

It felt at first like the next two frames would be a repeat of the first two: Boston playing better but unable to overcome the gap made by Toronto’s long-range accuracy. Then there was a significant shift midway through Q3 when Jaylen Brown recovered from a bizarre shotmaking slump and Jayson Tatum snapped into overdrive. (Kemba, by contrast, went cold, but without him the Cs might’ve fallen way behind earlier, so I give it a pass.) The ball also finally started moving as the Raptors’ thrown-together defense began to yield, which is why eight different Celtics scored in double figures tonight.

The Celtics having 8 Players with double digit points tonight and the W is beautiful thing to see!!! Btw the Celtics are finally clicking winning 4 straight headed into the All-Star Break!!! Carry on

Last but not least, the team again showed its improved ability to weather the storms of opponents’ late runs. Although the Raps got within three near the end, the Cs never looked truly rattled or frustrated and responded properly by relentlessly attacking the Raptors basket and derailing their momentum by getting in the bonus. (If anyone looked rattled it was someone like Toronto’s Powell, who reached Clippers-era Chris Paul levels of fury as Boston baited him into fouls and turnovers.)

This wasn’t a win that Tatum willed into existence like that Wizards game, but it’s still unthinkable without him.

Jayson Tatum has been tremendous tonight. +23 in 32 minutes.

The 11 points he scored in Q3 (out of 27 total) were, as stated, one of three primary factors that flipped control of this game into Boston’s hands. He’s not a guy who preens or boasts, but he knows how good he is; just look at his expression after making the shot below:

"Must be nice to be that good."

That’s right, Scal. (Is it just me or has Scalabrine’s Schmuck Factor gone off the charts in the past year? He’s always been kinda that way but it seems a lot more pronounced since he entered the booth with Gorman full time.)

The lack of reserve firepower has factored into almost every discussion about the Celtics since the start of last season, and it’s reached a fever pitch this season. Understandably so. But the bench’s key figures—Rob Williams, Payton Pritchard, Grant Williams and Jeff Teague—played very well. (10, 10, 17 and 14 points, respectively.) During Q2, they brought major energy when the starters were kinda logy, and later on, they helped solidify Boston’s lead despite Toronto’s continued 3-point barrage.

It wasn’t all great, reflective of the bench’s essential unevenness, or perhaps incompleteness; that seems more accurate to me. Semi Ojeleye played seven ineffective minutes and no other reserves saw the court. (Whither art thou, Nesmith?) But they exceeded expectations and it would be silly not to note that.

4. …but we’re really here to stan for GRANT.

I mean, I haven’t been able to in quite a while, so I feel like I ought to enjoy it.

Seriously though: Grant Williams is still a super-raw player, with uneven offense and defense that, while effortful, vacillates between “inspired” and “reckless.” (Averaging about 3 fouls a game is suboptimal for a budding defensive specialist.)

But when Grant is on, he’s very on, and tonight was a perfect example. His instincts for the best spots to shoot were keen, hence the accuracy from deep and effectiveness around the basket. His defensive contributions were mostly strong, and he only had one turnover (a Scott Foster-called offensive foul, so make of that what you will). More of this, please.

The Teague we got tonight was markedly better than what we expected his best-case scenario to be when he was signed. In short: A performance like this (14 points on 6-for-7 shooting) is an aberration. But he was undeniably critical to the win, and if he could get up to averaging 9 or 10 points a game with 5 or 6 dimes, that’d be really all the Cs need.

Until that point, the Raptors were in striking distance of a comeback; after it, things were basically decided. Sometimes you just gotta laugh.