5 rational thoughts about the Celtics’ latest loss to Brooklyn 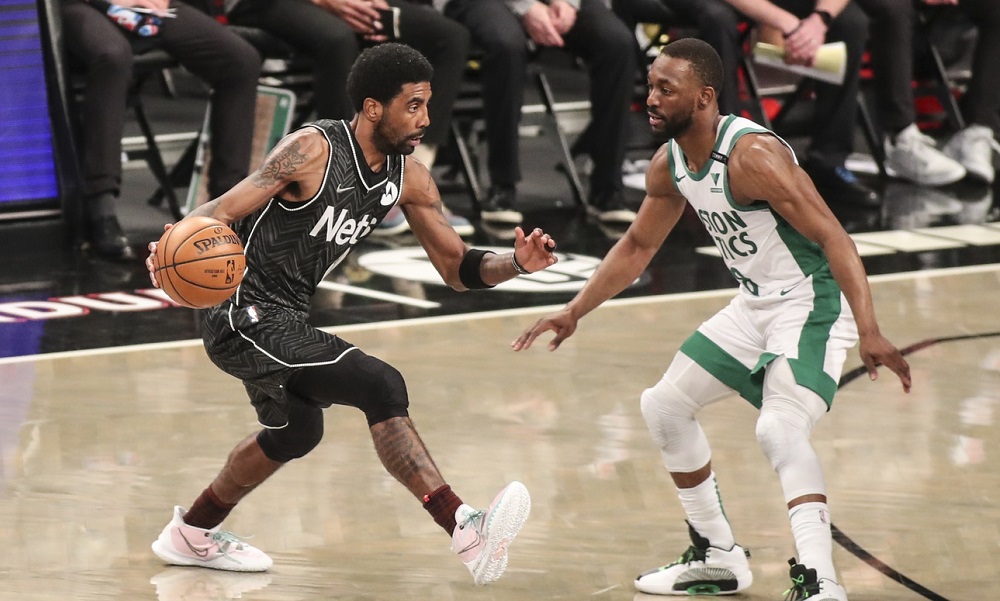 5 rational thoughts about the Celtics’ latest loss to Brooklyn

Stop me if you’ve heard this before: A close game – seven lead changes and eight ties – got away from the Celtics. Last night, Brooklyn outscored Boston 12-3 over the final 3:42 to turn a nail-biter into yet another crunch-time loss. We’re not delusional Green Teamers here, so these five thoughts will keep it real. Sorry!

After missing 18 games with his calf injury, Marcus Smart back on the court was a welcome sight. Smart played 21 minutes (basically the last five minutes of each quarter) and finished with an efficient 19 points on 4 of 6 shooting, 3 of 5 threes and 8 of 9 free throws. Smart even baited James Harden, the king of all grifters, into a shooting foul on a three-point attempt.

Unfortunately, Smart’s presence did nothing to stop Kyrie Irving from hanging 40 points on the Celtics. Marcus also was guilty of over-helping on defense, leading to some wide-open triples for the Nets.

So Smart’s return wasn’t perfect, but we’re still damn glad to have him back.

The Celtics are flawed at the line this season, at 76%, ranked 23rd of the 30 teams. Last night they were worse, making just 14 of 22. Tristan Thompson was the worst offender, going 0 for 4.

Meanwhile, the Nets were 18 of 22. Although those extra 4 points weren’t the main difference in the final score, the Celtics cannot afford to give away points against anyone, and certainly not to one of the best teams in the league.

The Celtics aren’t completely bad at defending the three, but they are bad. Per NBA Stats, they’ve allowed opponents to make 36.6% (20th in the league), averaging 12.4 makes on 36 attempts per game.

Lately, though, it’s been much worse. Their last three games, the Cs have allowed 19, 21 and 18 treys – that’s 174 points of long-distance shooting. If I heard right on the NBC Sports Boston postgame show, that’s the first time the Celtics have ever given up 18 or more threes in three straight games. And don’t forget, just before the midseason break the Cs set a team record by watching the Atlanta Hawks sink 23 triples.

Even the bounces aren’t going Boston’s way. Smart blocked a Nets layup attempt, only to have the ball go directly to Tyler Johnson, who drained it from deep.

Brad Stevens had better get this under control, or the Celtics will definitely regret it.

Can’t sugarcoat it: Kyrie Irving was unstoppable, shooting 15 of 23 for 40 points, with 8 assists. He more than picked up the slack for Kevin Durant being out injured. If Kyrie had just had an average night, the Celtics probably would’ve won.

Afterwards, on Twitter, Nets fans were dunking on the Celtics and their fans for a) having a bad opinion of the former Celtic, and b) ever believing Kemba Walker was the better of the two. There was also some revisionist history that Boston fans were the reason Kyrie fled to Brooklyn.

That’s flat out a load of BS. Quick summary, it was Kyrie who:

Nets fans might be okay with Kyrie skipping seven games for personal reasons in January, as long as he’s there in March to beat Boston. Sorry we don’t feel the same, but we have our reasons.

Kyrie plays a lot harder against the Celtics than he did in his last games with them.

Where did Kemba go?

This cannot happen. The Celtics need Kemba too much for him to be smothered like that. Not only was his lack of production glaring in light of Kyrie’s performance, but with Jaylen Brown also struggling (5 of 23 shooting), the Celtics had far too much to overcome. Not even Jayson Tatum’s 31-point effort could save them.