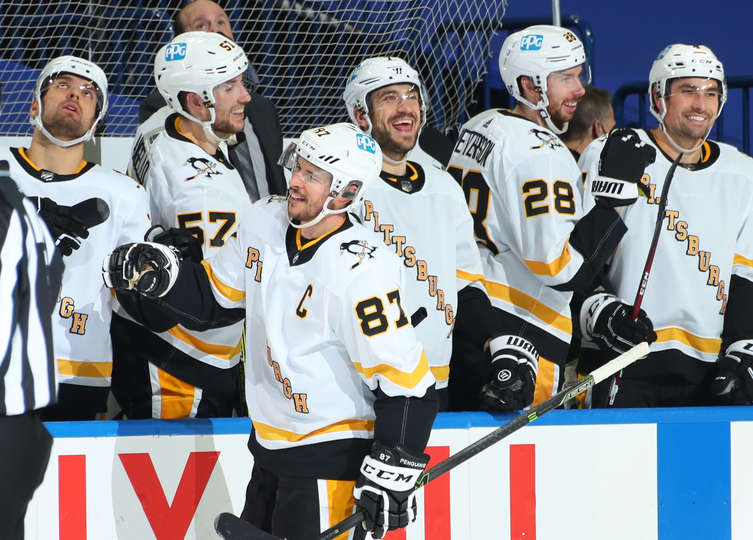 BUFFALO, NY – MARCH 13: Sidney Crosby #87 of the Pittsburgh Penguins celebrates his third period goal on an empty net at the bench during an NHL game against the Buffalo Sabres on March 13, 2021 at KeyBank Center in Buffalo, New York. Pittsburgh won, 3-0. (Photo by Sara Schmidle/NHLI via Getty Images)

You know that feeling when you get dragged to some even, probably a wedding (remember those?), because you simply ran out of excuses to get out of it?  Like, one of those events where you can’t just RSVP no and your reason is “I don’t want to come,” probably because seeing the passive aggressive Facebook post isn’t worth the trouble?

You had a responsibility to be there, but your posture all night made clear of one thing: you wanted absolutely nothing to do with actually being there.

That’s what this game felt like for almost the entirety of the night.  It just screamed of two teams that just didn’t want to be there for two very similar reasons.

The Sabres didn’t want to be there because their season isn’t going anywhere.

The Penguins didn’t want to be there because the Sabres season isn’t going anywhere.

Give the Penguins a ton of credit though.  You’d almost forgive them if they lost knowing how much of a trap game this could’ve been.

But with a 1-0 lead heading into the 3rd, they just flat out smothered the Sabres.

They managed to limit Buffalo to just 7 5v5 shot attempts in the final frame (11 in total) and just 6 total shots while generating 16 shot attempts at 5s on their own and doubling them up with 12 all situation shots on goal.  DeSmith was called into action on two big looks, but it really showed the guts and professionalism this team has really put together on this five game win streak.

No changes to the lineup that went on to top this same Sabres team on Thursday beyond Jarry getting the night off.  Marino and McCann remain sidelined with injuries.

Ready to rock and roll. pic.twitter.com/ymgyd0goAN

Carter Hutton between the pipes for the Swords and no Dylan Cozens after getting boarded by ZAR on Thursday.

There was talk during the pregame about the Sabres coming out for blood after the Pens ran around like rats on Thursday.  That never came because this is the Buffalo Sabres.

Neither did many scoring chances through the first 8+ minutes.  Then the Sabres got the first powerplay of the game with 11:20 remaining when Letang went off for hooking Hall.

Best chance on the PP came from Tanev just bullying the whole powerplay unit and slipping Blueger in, but they just couldn’t beat Hutton.

The kill seemed to wake the Penguins up and the Malkin and Kapanen line hopped over the boards did their wizard thing, doing damn near everything but score.  Just felt like the Pens were knocking and waiting to be invited in.  Exactly like vampires.

Swords with the better looks to open up the 2nd frame, but no one really cares.  Pens started finding their legs midway through the period and had two very nice chances, one from Aston-Reese and one off a Crosby/Guentzel 2v1, both turned aside by Hutton.

Same story as the first.  Time is a flat circle.  Eat Flavortown.

The pace did start picking up through the final 6 minutes of the period, leading to a Pens powerplay with Malkin drawing a hooking penalty with 3:36 left.

All this powerplay needed was 13 seconds.

Faceoff won.  Set up City.  Letang shifts the point of attack to Malkin and the seas just absolutely parted for Geno.  Soft, almost negligent pressure from Bryson as Malkin drifts away back towards the wall.  Montour was absolutely nowhere to be found, giving Guentzel enough time to redirect it on net and bang home his own rebound out of the air before anyone even thought about defending him.  What a mess here, but all of a sudden Guentzel is on a heater and the Milkshake Factory is buzzing.

Sabres controlled the 5v5 shot attempts for the period 21-13 and 11-8 in scoring chances.

Third period opened with a nice look off Cody Ceci’s stick and an exhilarating conversation about what you would consider the name of the clothes that NHL linesmen wear. 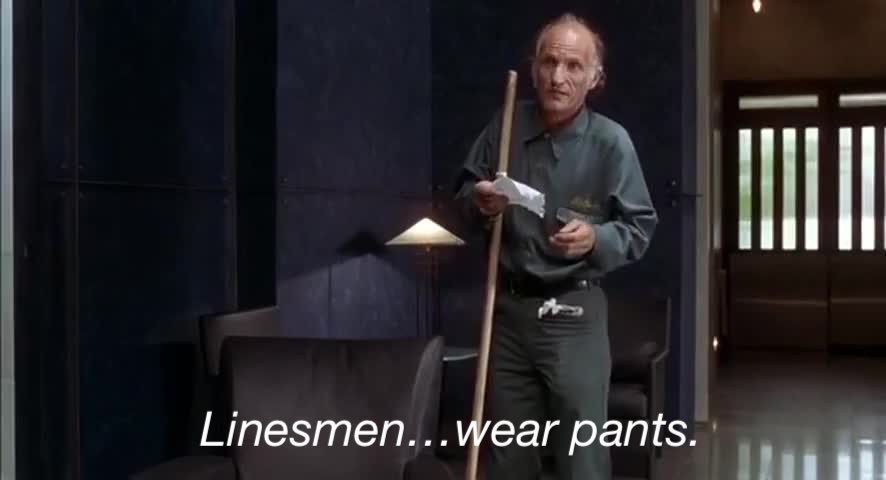 That would’ve been the best part of the night had Crosby not lost his stick and nearly scored with Geno’s.  Nearly made staying up to watch this late 7 PM start worth it.

Pens would head back to the powerplay with 9:38 left to try to give this game some juice and put it beyond a doubt.

Rieder got himself the cleanest look on a shorthanded breakaway, but got caught by Rust from behind.  Game saving backcheck.

Guentzel had another look too, but the rest of the PP would come to an end when Angello slashed Ristolainen to eventually put the Sabres on their second powerplay.  DeSmith with a look in his eye saying “brother, whatcha gonna do?”

If was enough to set up the business end of closing time, ending with a Crosby empty netter from about 199 feet….

..and a Mark Jankowski gimme goal to make it 3 for his first goal in 22 games.

Monday night showdown with the Bs.  Five game winning streak on the line.  Do it.