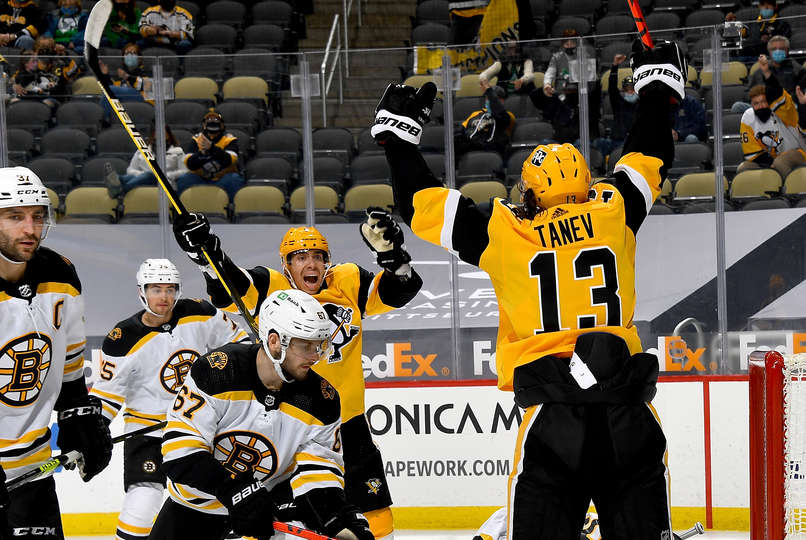 The Penguins (18-9-1) came into this game as victors of their past six games. Having already won the first game of the back-to-back with the Bruins, they were playing with house money, and any points accumulated would be chalked up to a success.

Teddy Blueger was a late scratch.

John Marino was placed on injured reserve prior to the game despite a game-time decision designation from Mike Sullivan.

Jared McCann, also dubbed a game-time decision, did not dress.

Casey DeSmith got the start in goal.

David Pastrnak opened the scoring with a slick backhander past DeSmith. Brian Dumoulin was puck-watching, which allowed Pastrnak to fly down the right wing and slip below the Penguins’ coverage.

Brandon Tanev potted his 7th of the season to tie the game with less than five minutes to go in the period.

The Penguins continue to score at a ridiculous rate with Kapanen on the ice. Here’s a cumulative look at his on-ice goals versus on-ice expected goals at 5v5 this season.

Kasperi Kapanen's on-ice finishing this year has been insane.

At 5v5 he has twice the number of on-ice goals as expected goals, and has been on the ice for over a 5v5 goal per game on average. #LetsGoPens pic.twitter.com/GNZxDjby0e

Dan Vladar, making his first NHL start, made a ridiculous paddle save against Colton Sceviour to keep the game tied.

Brandon Tanev given a major penalty and a game misconduct for this hit on Jarred Tinordi. Penalty upheld after review. Tanev livid with the call. pic.twitter.com/XwWUg51mHu

Tanev was assessed a 5-minute major and game misconduct for this hit on Jarred Tinordi. The penalty was reviewed, and somehow upheld by the zebra clowns.

Listen, I don’t get upset about officiating often. I’ve succumbed to the fact that it is going to suck more often than not. But I am utterly astonished this was upheld. We’ve all seen Tom Wilson make far dirtier hits than this that didn’t even result in so much as a minor penalty.

The result of the play was unfortunate, but by no means was the hit deserving of anything more than a minor penalty.

The Bruins took the lead on a seeing-eye shot from Trent Frederic. It was an incredibly smart and well-placed shot through traffic. DeSmith had a snowball’s chance in hell on this one.

Both teams were able to generate a bit more offense in this one. Shot attempts finished 59-47 in favor of Boston, but shots on goal were much closer at 35-33.

The Pens are back at it Thursday night in New Jersey. Puck drop at 7. Gooey on recap duty. LGP.