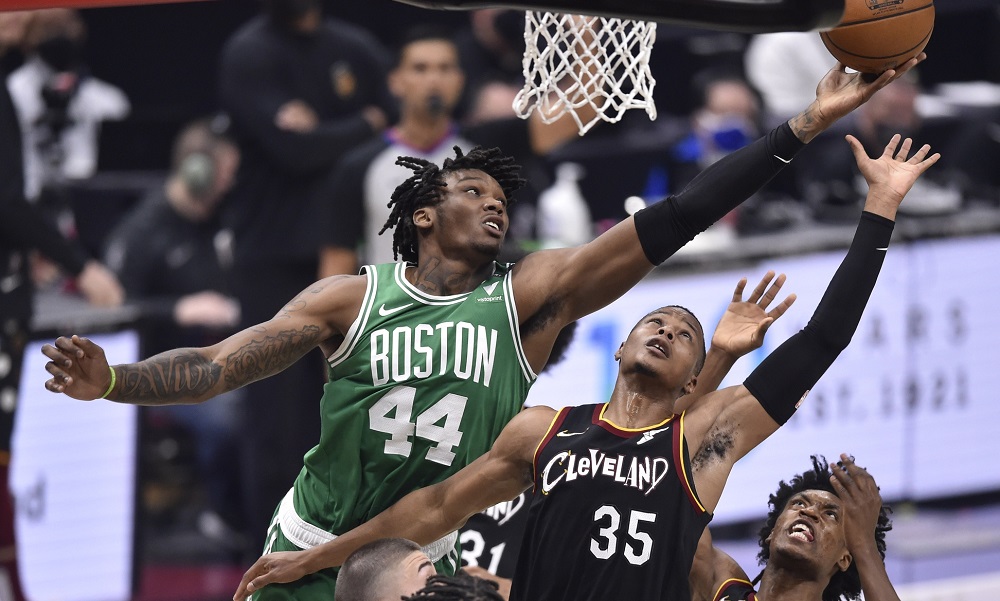 Even on St. Patrick’s Day, the Celtics could’t get it right. They lost tonight to the host Cavs, 117-110, playing some of their worst basketball of the season in the first half.

There was no luck of the Irish, mostly because they didn’t make their own luck: no defense, terrible offense, falling behind by 21 in the second quarter, and coming up short on a comeback attempt in the fourth. They did get to the foul line, but screwed that up too by making just 20 of 29, which may well have cost them the game.

A bright spot was, again, Rob Williams, 13 points, 14 rebounds and 4 blocks in a season-high 26:35 of playing time. Jayson Tatum had 29 points and Jaylen Brown added 28, each of them waking up and scoring more than 20 in the second half.

Cleveland was led by their two dynamic guards, Collin Sexton (29 points) and Darius Garland (25). Each of them had 6 assists and made big shots at important moments.

Both teams were on the second night of back-to-back games.

Respect to the Cavaliers for not rolling out some ugly green jersey they will never wear again and letting the Celtics wear green on St. Patrick's Day.

Anyone expecting the Celts to come out fired up were disappointed.

The paint is like a red carpet for Cleveland right now.

Just some hideous basketball by the Celtics so far. Five turnovers through eight minutes.

The second quarter was a complete disaster. Celtics Twitter didn’t hold back; here are a handful of examples.

Cavaliers have a 13-2 lead in points off turnovers, which feels obvious if you're watching but probably is worth noting.

I'd bet Javonte and Nesmith have some fresh legs

No energy and no effort Celtics.

Marcus Smart trying to get his guys fired up pic.twitter.com/BwRVcofq25

I'm not tweeting stats from this mess.

Jayson Tatum is 2-8, 0-5 from three, with no more of an idea how to rescue this offense than any other player in green. Cleveland has scored 15 points off 12 Celtics turnovers.

Third quarter, Celtics showed a bit of fight. And then more fight.

everything robert williams does looks so cool pic.twitter.com/S86qEbkRG0

Rob Williams' back-to-back defensive plays – the steal and the deflection – are the kind of plays that this #Celtics team desperately needs tonight. pic.twitter.com/6Hy49KnlL1

JB getting the Celtics back in the game

Early fourth, these being the Celtics, Timelord fell hard on an alley oop and came up hurting. He went to the locker room, but did return to the game.

Robert Williams to the locker room after trying to tough it out after awkward fall. pic.twitter.com/n1OOsjAKQJ

Boston crept all the way back to within three points as The Jays came alive.

10 in a row from Tatum. #Celtics #Cavaliers

The Cs kept shooting themselves in the foot by missing at the line.

Then a late 10-2 Cavs run put them in charge with less than two minutes left.

This isn't looking for the Celtics. That's a soul-snatcher

Last-minute idiocy. Unbelievably, no foul was called on this play, and when it was reviewed, the ruling was “not a hostile act,” no penalty. If a foul had been called in the first place, the review would’ve been for a flagrant and might have been a turning point.

lol i cant believe jaylen made the shot after this fuckin slap to the face pic.twitter.com/aXEuH9LARR

It's ridiculous how a replay system can show a clear palm to the face but not allow for a foul to be called.

Cleveland started the night with the 30th (last) ranked offense in the NBA.