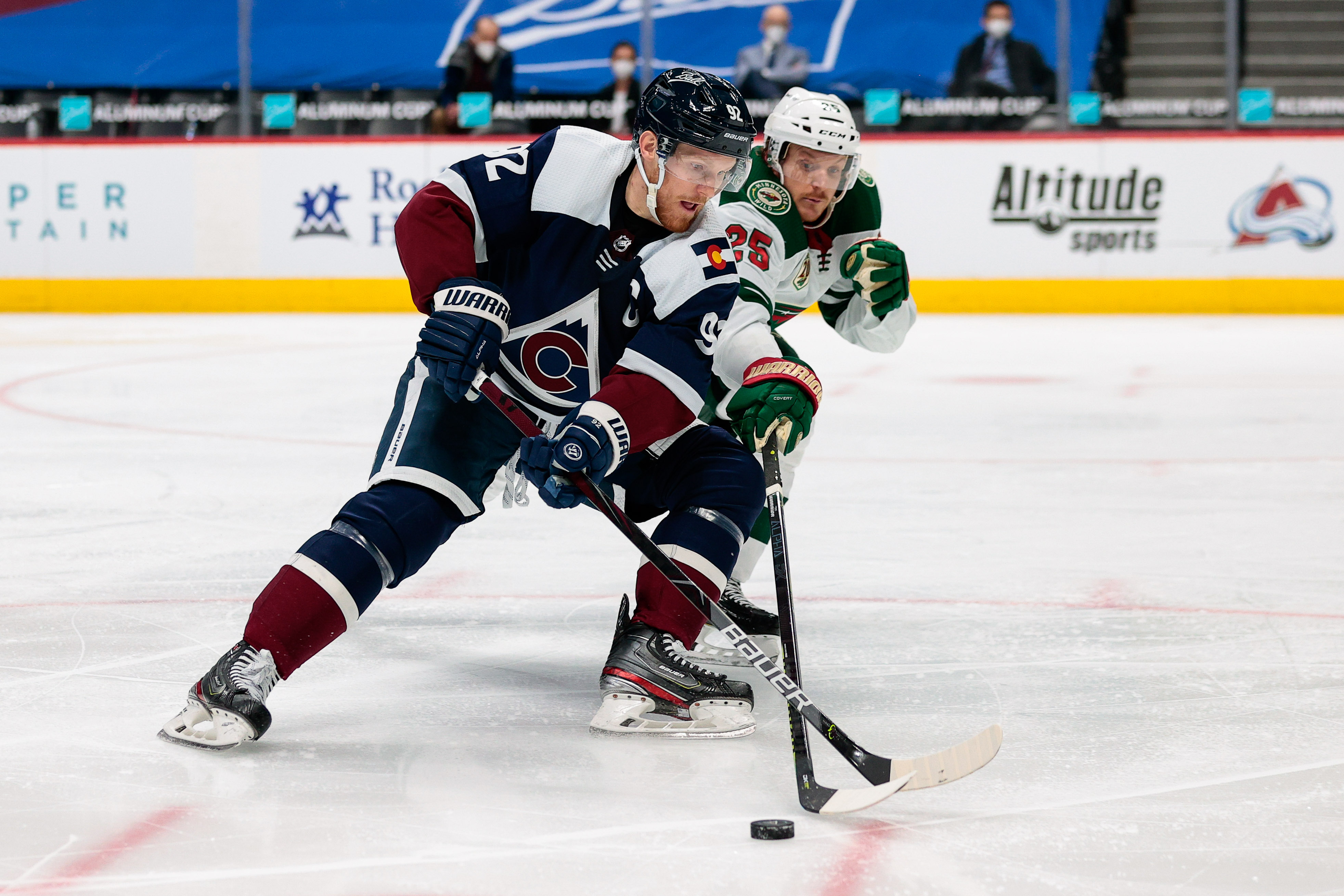 Minnesota certainly changed its lineup for this afternoon’s game by swapping out Luke Johnson for Joey Cramarossa and juggling up the forward lines.  Initially the changes seemed to give the Wild a bit more energy as Cramarossa clearly was out there to dish out hits as Minnesota tried to slow down Colorado with the forecheck.  Yet an early tripping penalty on Ian Cole would prove costly for the Wild just a few minutes into the game.  The Avalanche would light the lamp on the power play as Cale Makar let go a heavy wrist shot that fooled Kappo Kahkonen to give Colorado a 1-0 lead.

The early goal seemed to make Minnesota a bit more anxious with the puck and the Wild were using more area passes and the boards and glass more to get it out of their zone which made for easy turnovers and Colorado was able to sustain the attack.  When the Wild did make their way into the Colorado zone, bad passes and blocked shots thwarted potential scoring chances.  The Avalanche would add to their lead as Nathan MacKinnon would draw the attention of 3 Wild defenders and he’d feed a pass over to Gabriel Landeskog who got off a quick shot that fluttered up into the air and then back behind Kahkonen and in.  The goal would be reviewed to see if Landeskog punched it out of the air with his glove but he did not so it would stand, 2-0 Colorado.  Minnesota would try to rally back as Jordan Greenway dropped his shoulder and just about carried Samuel Girard to Philipp Grubauer and drawing a hooking penalty in the process.  On the man advantage, the best chance came off a Kirill Kaprizov drop pass to Jonas Brodin who skated around one Colorado penalty killer and then moved in for a backhander that never seemed to make it on goal and before anyone could pounce on the rebound it was cleared out of the zone.  The Wild would regroup and Kevin Fiala used his strength to win a few battles for the puck before he was able to send a sharp angle shot on goal but that’s all Minnesota was able to create with the power play and they’d skate into the 1st intermission trailing by two.

The 2nd period wasn’t any better for the Wild as Colorado would extend their lead just 46 seconds in as Mikko Rantanen skated in and sniped a shot over the glove side shoulder of Kahkonen who seemed to be standing in his crease in disbelief at the shot.  3-0 Colorado.  The Avalanche continued to swarm in the Wild zone and a cross ice pass by Joonas Donskoi found Tyson Jost who went top corner blocker side to make it 4-0 Colorado.  The Wild seemed to be in a mental haze and they struggled even to enter the Avalanche zone even when they had numbers in their favor.  Wild players were overskating pucks, mishandling simple passes or sending them into the skates of teammates meant Colorado’s best defender was Minnesota itself.

Kaapo Kahkonen would try to inspire the Wild as he stopped Pierre-Edouard Bellemare on a breakaway.  Minnesota finally started to play with a bit more jump offensively as the trailed by four, as Zuccarello ripped a shot off the rush that was steered aside by Philipp Grubauer.  The Wild’s pressure would draw a holding call on Landeskog.  On the man advantage, the team tried to set up Zuccarello and Kaprizov for shots but Grubauer and the Avalanche were able to limit the time and space for both Wild wingers.  Colorado would add to its lead a few minutes later when MacKinnon again turned on the jets to create a 2-on-1 and he’d feed Devon Toews a cross-ice pass for a perfect finish to give Colorado a 5-0 lead going into the 3rd.

The 3rd period was simply two clubs going through the motions of finishing a hockey game.  With Minnesota trying to pinch with its defenseman and taking more risks offensively the Avalanche would add another goal as Valeri Nichushkin would fly by Rask and then beat a sprawling Kahkonen with a forehand to backhand move.  6-0 Colorado.  Minnesota threw about all that they could to try to get at least one goal for pride purposes but Grubauer was able to come up with the saves and the Wild would feel the pain of being swept by the Avalanche.  Kahkonen had 33 saves in the loss.

What did you think of the Wild / Colorado series?  Tell us on Twitter @CreaseAndAssist! 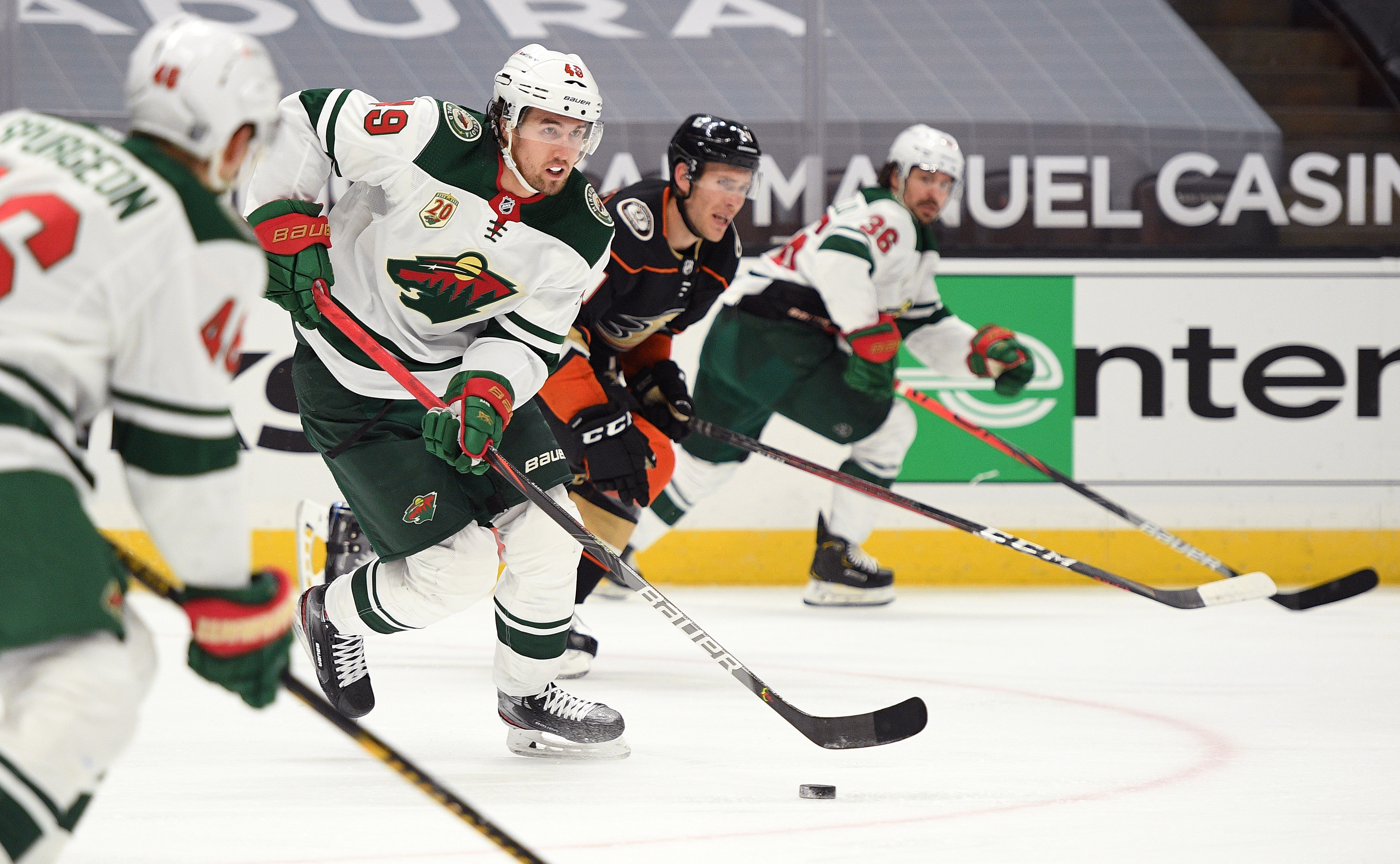 When Minnesota traded Nino Niederreiter for Victor Rask the move did not go over well with many fans and members of the media.  Niederreiter was a fan favorite and was a rarity on the team as a player that typically had a shoot-first mentality.  So when the team dealt him to Carolina for a center who was having a very lousy year it was seen as a fairly unimpressive return.  Rask’s move saved the Wild a little cap space, but at the start of the season he had suffered an injury he sustained at home when he cut himself deeply while trying to cut some sweet potatoes.  He arrived to Minnesota, looking timid which did not endear him to the fanbase while Niederreiter thrived with more opportunity with the Hurricanes and the move looked like the Wild got fleeced.

The next season didn’t go much better as Rask was often scratched and even when he did get a chance to play it was mostly on the 4th line.  Yet even with 4th line minutes Rask did managed to score some clutch goals on the road last season.  Many felt Rask was a likely buyout candidate this off-season, but Wild General Manager Bill Guerin refrained from that move and instead told the media and fans he felt that the Swedish centerman probably hadn’t really been given a fair chance to show what he can do.  With Minnesota jettisoning veteran centers Mikko Koivu and Eric Staal the opportunity was suddenly there for Rask to show he was worthy of more ice time and opportunity.

Playing on a line with a rejuvenated Mats Zuccarello and Kirill Kaprizov certainly hasn’t hurt and when Zuccarello returned to the lineup, this combination has been the team’s best line for most of February and March.  Rask has shown some scoring touch as well as some good skill in the offensive zone and while he doesn’t have terrific speed he’s shifty enough to create some space for himself.

With 7 goals, 12 points in 26 games he may not be lighting the world on fire, but he’s giving Wild Head Coach Dean Evason more reason to play him in situations where he can use his skills to his greatest advantage (i.e. on draws in the offensive zone).  I am not saying Rask is the best center on the team but I think he has more skill than many fans cared to admit due to their anger over the trade that brought him here.  He is still under contract for next season at $4 million per season and since no center help will probably happen this season the team might as well give him a chance to play and thrive.  So far he’s shown he can reward the team when given opportunities.

D – Daemon Hunt (Moose Jaw, WHL) ~ The Warriors’ captain had the game winning goal (2 shots on goal) in Moose Jaw’s 5-4 overtime thriller against Regina on Tuesday night.  Hunt has goals, 2 points, PIM’s and is in games.

RW – Matt Boldy (Boston College, H-East) ~ The talented sophomore had an exceptional game, registering 4 assists on 2 shots but it wasn’t enough in the Eagles 6-5 double overtime loss to UMass-Lowell on Wednesday.  While his team lost, they will still earn a spot at the NCAA Tournament. Boldy has 10 goals, 30 points, 4 PIM’s and is +14 in 21 games.

G – Filip Lindberg (UMass, H-East) ~ The Finnish-born netminder had 20 saves in the Minutemen’s 5-2 win over Providence on Wednesday.  Lindberg has a 6-1-4 record, 1.59 goals against average and a .937 save percentage with 2 shutouts.

LW – Adam Beckman (Spokane, WHL) ~ The WHL MVP’s first game back in Spokane was a good one as he had a goal and two primary assists and 10 shots on goal in the Chiefs’ 4-3 in a shootout to Seattle.