Your Morning Dump… Where the Celtics are going nowhere, and neither is Brad 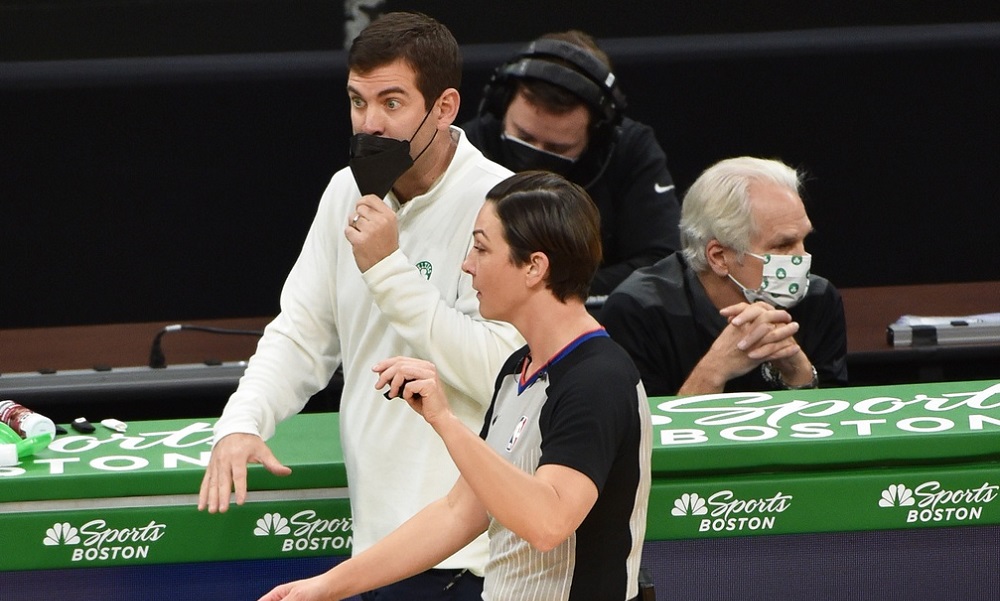 Your Morning Dump… Where the Celtics are going nowhere, and neither is Brad

This is where finding the true cause of this gets weird, because this isn’t a team at each other’s throats. This group of guys does, actually, get along. After games, the only fighting with each other we hear is between guys trying to take responsibility for the issues.

“The reason guys are all pointing on themselves is because we have such great dudes,” Walker said. “We’re very high character. I don’t know if you’ll find many teammates who really put the blame on themselves, especially on one team. So I really do appreciate my teammates and respect my teammates further for that.”

Still, the energy for the game isn’t there for this team. The enthusiasm is missing.

“It’s a lot of small things,” Walker said. “For instance, a guy falls down and you want to see everybody go over there and pick him up. If someone does something great, you expect to see guys up and cheering. Just small things like that, just for an example. I think that’s a few examples of being invested in each other.”

This felt like the kind of game the Celtics would usually start with a powerful punch. They’d lost three of four, they were back home, Walker was playing, and the players said all the things a reeling team needs to say about fixing what is wrong. But then the game began and Boston had its now-familiar lack of energy and effort. There were careless passes on offense, and on defense the Kings feasted inside while facing little resistance. The Celtics did not have the look of a team that was getting ready to turn its season around.

Globe: Desperate for a win, Celtics come out flat again in loss to Kings, and other observations

“It’s got to be 17 guys dying to play well together — and I think the fun follows that,” Stevens said. “You share it. You dive on the floor, you rebound, you’re tough every single play. When something doesn’t go your way, you tip the cap to the guy. … We need more of that, bottom line. And you know what, it’s fair to say that’s on me.” […]

“Teams are fragile things,” Stevens said. “Guys are trying — and they are all really good guys trying — but sometimes even when you’re giving good effort, or you have a group of possessions that go pretty well, five guys engaged does a lot, and we just haven’t had that recently.”

MassLive: Celtics’ Brad Stevens voices frustration on sub-.500 Boston squad: ‘It’s got to be 17 guys dying to play well together’

The one consistent thing about the Celtics this season is that they almost always find ways to lose close games. Like Murphy’s Law: Whatever can go wrong, will go wrong.

In the past week, they’ve gone nowhere but down. During the current three-game losing streak, the Celtics managed to lose in three different ways, to teams at the top and near the bottom of the standings, failing in every crunch time.

Another factoid: In consecutive games, the Celtics allowed 117 points to the Cavs, who are last in the league in offensive rating (104.6), and were held to 98 points by the Kings, who have the league’s worst defensive rating (118.1). That’s almost impossible.

In 28 “clutch games” this year — contest where teams are separated by five or fewer points with under five minutes left in the game — the Celtics have an 11-17 record. That .393 winning percentage in clutch situations ranks them 23rd out of 30 NBA teams.

And what is the root cause of that? The Celtics’ awful fourth quarter performances.

This year, the C’s rank dead-last in the league in fourth quarter margin, and that will only get worse after they were outscored 25-15 by Sacramento in the fourth on Friday.

Only 15 points in the fourth, because the starting five combined to shoot 4 of 18 in the quarter. Kemba scored 8 points but Jaylen had just 2 and Jayson, Smart and Theis had zero.

It’s really been that kind of season. They’ve gone from preseason contenders to trying to avoid the play-in tournament. Boston has fallen back to eighth place in the East and are facing five games in the next seven days. No one seems to have answers or ideas of how to turn all this around. Sure, Danny Ainge could make a trade, but the way everything is going, would it even matter?

If I’m Harrison Barnes, I’d rather stay in Sacramento.

The trade deadline is Thursday, March 25. The Celtics might become sellers instead of buyers, which no one expected when the season began, but gets more likely with every terrible loss.

Related – Boston.com: 5 takeaways as Celtics fail to show resolve in loss to Kings, their third straight  |  The Athletic: Can the Boston Celtics and Sacramento Kings work out a trade for Harrison Barnes?

As Chuck posted yesterday afternoon, rumors that Brad was being hired as the new coach of Indiana University just wouldn’t quit, even though Brad had already denied them. So yesterday, when asked again, he was more forceful.

But Stevens reaffirmed that he plans to stay in both his pre-game comments to Celtics radio play-by-play announcer Sean Grande and his comments to the media. […]

“I love coming to work every day. I love this area,” he said. “People have been great to us. My family is so happy. And, at the same time, home is home. And that’s why I wanted to make sure everybody understood that means a lot. […]

“I’m not a kid anymore,” he said. “I’m a 44-year-old Masshole. I swerve around others when I’m driving, I eat Dunkin Donuts and I root for the Patriots. I’m, unfortunately, skewed in a lot of ways, I guess.

If you don’t know what a Masshole is, the Oxford English Dictionary has you covered.

Here’s the coach’s full statement and some Twitter reaction:

Brad Stevens has told the team and Celtics management that he’s staying.

"I have a great deal of love for Indiana so I want to make sure everyone knows that but you can still so that and love where you are and do your job and be thankful for all this place has done for us."

It’s incredible Brad Stevens has to even spell this out for people. No one is leaving a head coaching job in the NBA for college anymore. Not the Celtics. Not the Kings. Not anyone, anywhere. Nobody is returning to college unless they’re no longer welcome to stay in pros.

Celtics fans have loved Brad since he arrived and helped make the team winners again, but that feeling has ebbed among many during this rough season. Right or wrong, a good portion of the fan base was hoping Brad would take his talents to Indiana.

Can he salvage the season? Well, it’s not totally up to him. Words of wisdom from former beat writer Steve Bulpett:

If being embarrassed by these performances isn't enough to motivate players to dig in, then the problem is deeper than something that can easily be fixed by what a coach is going to say.

The Celtics have the ABILITY to steer out of their skid. It's now a matter of will. https://t.co/ObAzijQgXU

And, finally… Take of the night

Maybe the solution really is just this simple.