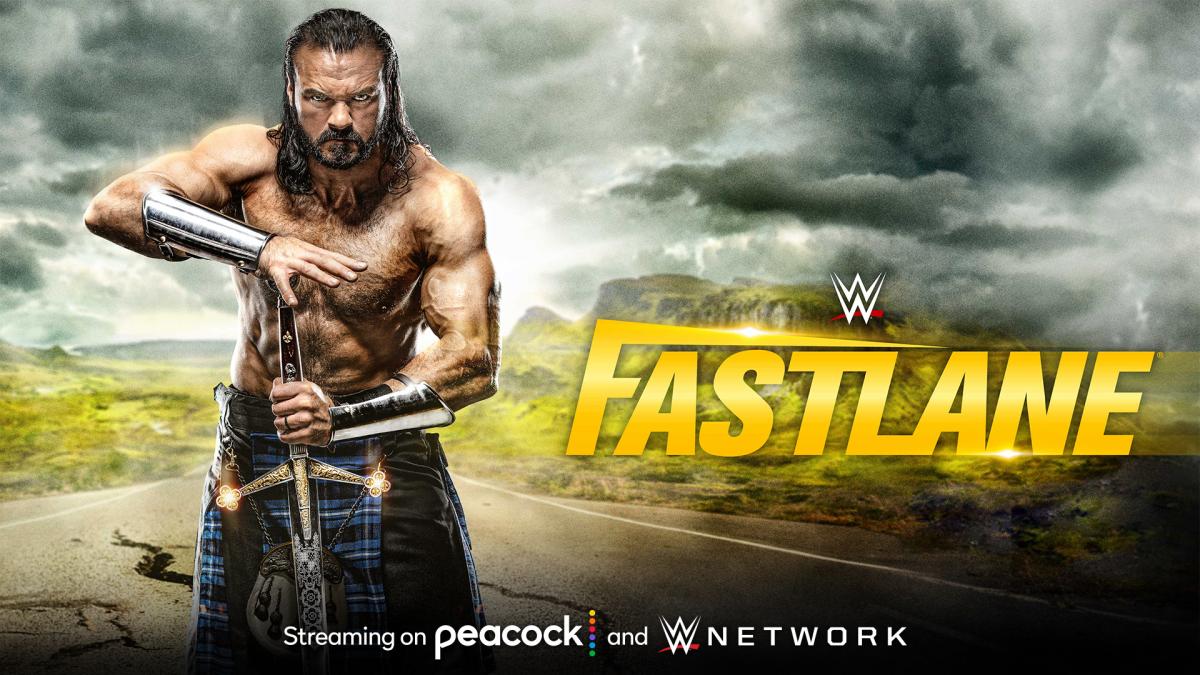 WWE Fastlane 2021 took place inside the WWE ThunderDome at Tropicana Field in St. Petersburg Florida. This was the final pay per view on the road to WrestleMania 37. The show featured a no holds barred match between Drew McIntyre and Sheamus, Randy Orton took on Alexa Bliss and Seth Rollins went one on one with Shinsuke Nakamura. Plus, championship matches including Big E defending the Intercontinental Championship against Apollo Crews, Nia Jax and Shayna Baszler put the Women’s Tag Team Championship against Bianca Belair and Sasha Banks and Roman Reigns and Daniel Bryan compete for the Universal Championship with Edge as the special enforcer.

Sasha and Bianca argued after the match. Sasha kept calling Bianca a rookie and slapped her in the face. Sasha walked away as Bianca looked at the WrestleMania sign saying it is on between her and Sasha.

They showed a picture of Shane from earlier showing he is holding his knee.

Shane came out of the trainers room backstage. Elias came up to him trying to tell Shane that he wants to be at WrestleMania. Shane kept saying that it is not a good time right now but Elias kept insisting. Shane tells Elias that he has an idea for him.

Apollo attacked Big E after the match. He slammed Big E over and over and knocked him out with an Olympic Slam.

They show the footage of Shane hurting his knee during a sparring practice.

Elias was in the ring with Shane McMahon and Jaxson Ryker. Shane asked what Elias could do for WrestleMania. Elias plays his guitar but then Shane stops him to say that he is taking Shane’s place in his match against Braun. Elias is surprised as Shane leaves the ring and Braun comes out for the match.

They show footage from the pre show if Riddle retaining the U.S. title and Retribution getting rid of Ali afterwards.

Riddle went up to Shinsuke and wished him good luck in his match against Rollins. He asks Shinsuke if he wants to go into business with him to make the scooter look awesome and starts to ramble until Shinsuke left. As Riddle left on the scooter, Shinsuke came back to prepare more for his match.

They announce that on Raw tomorrow night, Rhea Ripley will make her debut.

Drew McIntyre Defeated Sheamus In A No Holds Barred Match

The man who will challenge @fightbobby for the #WWEChampionship at #WrestleMania stands taller than ever tonight.#WWEFastlane @DMcIntyreWWE pic.twitter.com/NEakAVAdNp

Randy Orton came out for his match with Alexa Bliss but then started spitting out black goo in the ring before Alexa came out. He got a towel and wiped the goo off his mouth. He yelled at Bliss to come out and she did.

The show ended with Roman standing tall with the Universal title.

Overall Review: This show pretty much was what I expected it to be in terms of a pay per view to help set the stage for WrestleMania. It wasn’t a perfect show but it did what it needed to do. The first half of the show wasn’t all that great. The Women’s Tag Team title match was what it was and was designed to heat up the match between Sasha and Bianca for their Mania match. The Intercontinental title match was going really good until the finish of the match. I have no idea what they were going for and to just have a not so clear inside cradle win on a feud that’s been built as a personal feud for the title was so dumb. It did not come off the way I would’ve imagined and not even the beat down that Apollo gave Big E didn’t really save it all that much. Braun Strowman’s squash on Elias wasn’t terrible but it was just there and it was designed to have Shane’s feud with Braun go further into Mania. Same thing with the Seth Rollins and Nakamura match. It was a solid match but it really did nothing for me and at least they should’ve had Cesaro come out for revenge afterwards but nothing after Rollins won. The Sheamus and Drew match was when things really picked up. These two really beat the hell out of each other and it was probably my match of the night. The whole thing with Randy and Alexa was another match I expected what would happen which was The Fiend showing up. I didn’t expect Alexa to beat him thanks to The Fiend which I don’t have a problem with Alexa pinning him it’s just that this match as far as I know wasn’t a no DQ match so why didn’t the ref call for the bell when The Fiend gave Orton the Sister Abigail? If that’s what they were going to do at least make it no DQ. The Universal title match was another match I enjoyed watching. It was as good as I expected it to be and what ended up happening was kind of what I expected as well. It looks like with the way this is going, Daniel Bryan is probably going to be inserted into the title match at Mania with Edge and Roman which I don’t mind at all. I think that match will be really awesome.