Rapid Recap: Celtics fall to Grizzlies in OT despite super effort from Jeff Teague…wait, what? 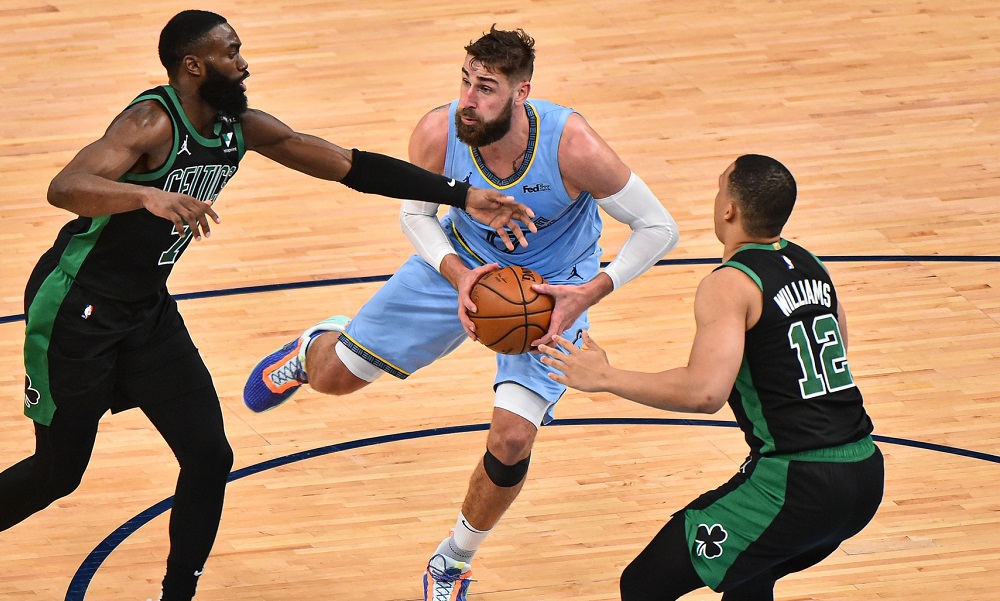 Rapid Recap: Celtics fall to Grizzlies in OT despite super effort from Jeff Teague…wait, what?

The Memphis Grizzlies broke a 10-game losing streak to the Celtics tonight, winning 132-126 in overtime, despite Jeff Teague having a throwback performance of 26 points (6 of them in the OT), 10 of 12 shooting, and 6 assists.

Key to the game was the Grizzlies’ dominance inside. They scored 80 (!) points in the paint by relentlessly attacking the rim, and ruled the rebounds, 54-43, including 17 offensive boards.

The Cs were down 10 in the fourth but tied it in the final seconds on a a Daniel Theis dunk off a Marcus Smart lob. The Celtics might have won it in regulation, but they missed four free throws down the stretch.

In overtime, the Grizzlies took a 5-point lead on a Grayson Allen three, then ran off most of the final minute with a possession where they twice got offensive rebounds.

Besides Teague, the Celtics got 27 points, 9 boards and 5 assists from Jaylen Brown and 17 points and 4 blocks from Robert Williams off the bench. Memphis was led by 29 points and 9 assists from Ja Morant, 24/7/7 from Dillon Brooks, and 16 points and 19 rebounds from Jonas Valanciunas.

The Celtics knew they’d be without Kemba Walker, Tristan Thompson and Romeo Langford. However, less than an hour before tipoff, this gut punch happened.

The Celtics got off to a strong start.

Teague, handed the keys, has been aggressive.

Look at the energy from Boston's bench. They're vibing tonight. pic.twitter.com/CgkRwikY0i

#Grizzlies begin 2Q 8-for-9 FG, as they are going at Javonte Green, using his aggression against him.

#Grizzlies tightening up their P&R defense and hitting everything. Waiting for this one to go off the rails. Memphis 13-of-17 in the 2nd.

Third quarter, Grizzlies continued their assault inside, and Ja got everyone’s attention.

Ja Morant, all 6-foot-3 of him, is out here throwing down Rob Williams-type dunks😳 pic.twitter.com/Doe0xybOAk

Just a wild stat: The Grizzlies lead the Celtics 68-30 in points in the paint.

I want the Celtics to win this game but the level of ball movement and offense moving off ball is encouraging in the 2nd game of a B2B.

Teague doing it all in OT#Celtics Rewind presented by @tmobile pic.twitter.com/5ckPc646Ji

That Smart 3-pointer was a very bad decision lol

Down four, 31.0 seconds left, the Celtics lose a guy on an inbounds play who does nothing but stand in one spot. Then give up an offensive rebound after Brooks misses. pic.twitter.com/ez5oiTgqTI

Brad Stevens: “There was a point in time during the second and the third where stops — we weren’t getting any.”