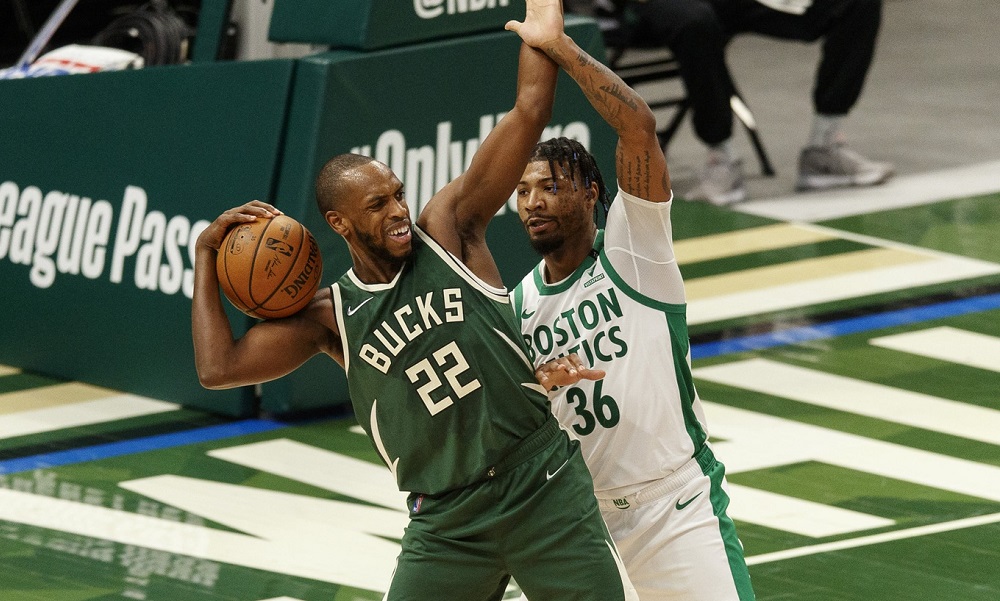 It was the worst of times, it was the best of times, but in the end it was the worst again. The Celtics lost to the Bucks, 121-119, after playing a terrible first half, trailing by as many as 25 in the third quarter, then mounting a furious rally that ended with Daniel Theis missing a wide open 3 at the buzzer.

The Celtics were led by Jaylen Brown (24 points), Kemba Walker (23) and Jayson Tatum (18 points on an off-night shooting). Jeff Teague had another good performance with 15 points off the bench.

On the Bucks’ side, Boston smothered Giannis Antetokounmpo (just 13 points and 5 turnovers), but got killed by everyone else. Khris Middleton, as usual, had 27 points, 8 of them in the fourth quarter when the Bucks were cold. They also got an unexpected 21 points from Bobby Portis, and 17 each from Donte DiVincenzo and Brook Lopez.

The Celtics are now two games under .500 and play in Milwaukee again on Friday.

Jaylen is doing everything right now

…yet the refs weren’t impressed.

I respect nba refs as much as they respect Daniel Theis

Second quarter, tough moment for Semi Ojeleye, who was hit by a hard pick and left for the night with a hip contusion. Refs didn’t call a foul, though they could have.

Beyond that, the Celtics were being abused on defense.

Celtics shot 51.1 percent in the first half and are down by 13.
Just one free throw, and defensive effort was pretty bad. A lot of sagging shoulders.

Celtics trail the Bucks 70-59 at the half

The Celtics shot 51 percent from the field, hit 10 3s, and trail by 11 because the Bucks went over 50 from the field and 3 and scored 70 points in the first half. Yes, Boston has had lots of injuries, but C’s have also looked like a .500 team all season no matter who has played.

Third quarter began with a Bucks 9-0 run that blew the lead out to 20. All the Celtics’ bad habits were on display.

Smart overhelps when Tatum is guarding Jrue on the block… Jrue kicks out for an open 3 for the Bucks.

#celtics. Dig deep time. Or give up on the SEASON. You decide.

So many defensive lapses. Random Bobby Portis double by Kemba = another layup for Bucks

But there was some hope…

Tatum would not be denied 💪🏽#Celtics Rewind presented by @tmobile pic.twitter.com/KMZacnOXOQ

Great pass by Smart. Celtics down just 8. Defensive effort has picked way up in the second half.

Tatum hard to the basket for the and-1!#Celtics Rewind presented by @tmobile pic.twitter.com/LFDWbLtm7K

C'mon, basketball gods, this should have gone in… pic.twitter.com/BzGU66layE

It feels like the Celtics lost two games tonight. One by blowout, the other in heartbreaking fashion.

😯 Boston rallied from 25 down
🤦🏻‍♂️ Theis, Smart, Kemba miss late chances to tie or go ahead
⏰ 17 hours to the trade deadline
🔙 Rematch on Friday