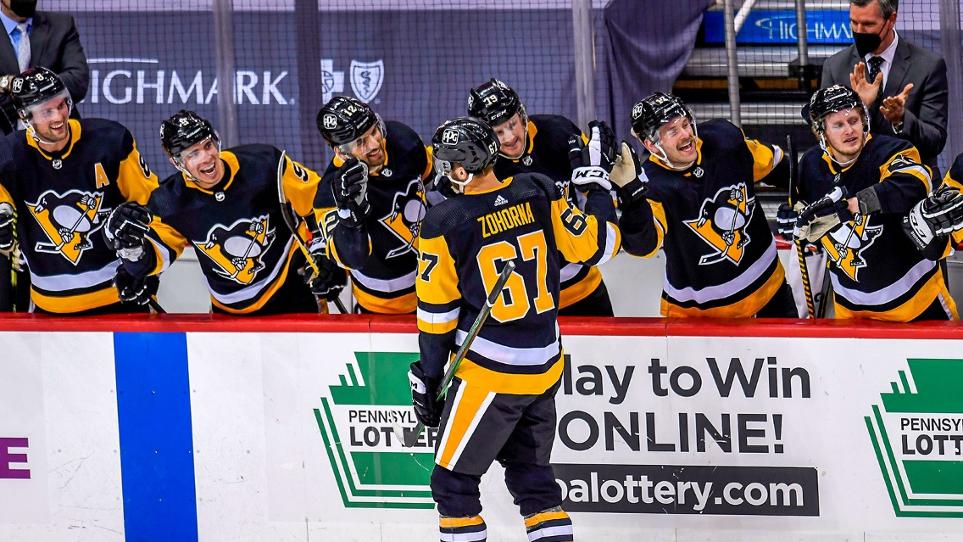 Full credit to Laura @werewolfbrmtzvh for the incredible title of this post.

Before the game the Penguins received more bad news by way of injury; Kasperi Kapanen is out week-to-week with a lower-body injury. It truly never ends with this team.

Last night I was chatting with other Penguins fans about potential line combos when the team is finally healthy. At this point it probably won’t even matter with the never-ending injury carousel.

The Sabres received bad news before the game as well. Having lost their last 15-games, any bad news might as well be comic relief. They announced that interim head coach Don Granato and assistant coach Matt Ellis were placed into Covid protocol. General manager Kevyn Adams took the helm behind the bench.

In: RADIM ZOHORNA, a 24-year old 6 foot 6 inch giant set to make his NHL debut. He had three goals and six assists in 11 games for the Wilkes-Barre Scranton Penguins before the Penguins brought him up due to injuries.

As if the Penguins weren’t banged up enough, Sidney Crosby took a high hit from Rasmus Ristolainen just moments after puck drop. It was 100% interference and was the exact kind of play that typically isn’t called a penalty but should be.

Later in the period, Crosby nearly created a highlight for the ages when he dropped Ristolainen in the corner and set-up Jake Guentzel for a brilliant backdoor chance. If Guentzel had buried it, hoo boy.

Are you kidding me?! The 6 foot 6 inch giant Zohorna got the game’s first goal on his first career shot.

You can’t write it up any better than this. Textbook stuff. Get lost in the slot while all attention is diverted to the puck battle down low. The puck eventually found him and he blistered it to the back of the net.

How could you not love this guy?

Can we convert on the power play? YES, WE MCCANN!

Letang and Crosby pick up the helpers. pic.twitter.com/Uc08kKo3RP

Jared McCann padded the lead with a beautiful wrist shot past Dustin Tokarski on the power play. You gotta love the shot, but how about a nod to Crosby for holding the blue line and quickly dishing the puck to Kris Letang, who then found McCann open in the slot.

Why have one McCann goal when you can have two? 😁 pic.twitter.com/UeNC9JMvDr

McCann double-dipped for his second power play goal of the game to give the Penguins some insurance. Two gorgeous shots off his stick in this one.

Bit of an interesting choice to pull the goalie here, but we’ll take it.

Crosby’s third point of the night gives him a total of 1,300 for his career, making him the eighth fastest to do so in league history.

With his assist on Jake Guentzel's goal, Crosby becomes the eighth-fastest player in NHL history to record 1,300 points (1,017 GP). pic.twitter.com/0BuGhwQxwY

It wasn’t a stellar performance but the Pens took care of business. The Sabres had quite a few dangerous looks in this one, posting 4.47 expected goals to the Penguins’ 2.56, per Evolving Hockey.

The Penguins are back in action Saturday at the Paint Bucket against the New York Islanders. LGP.