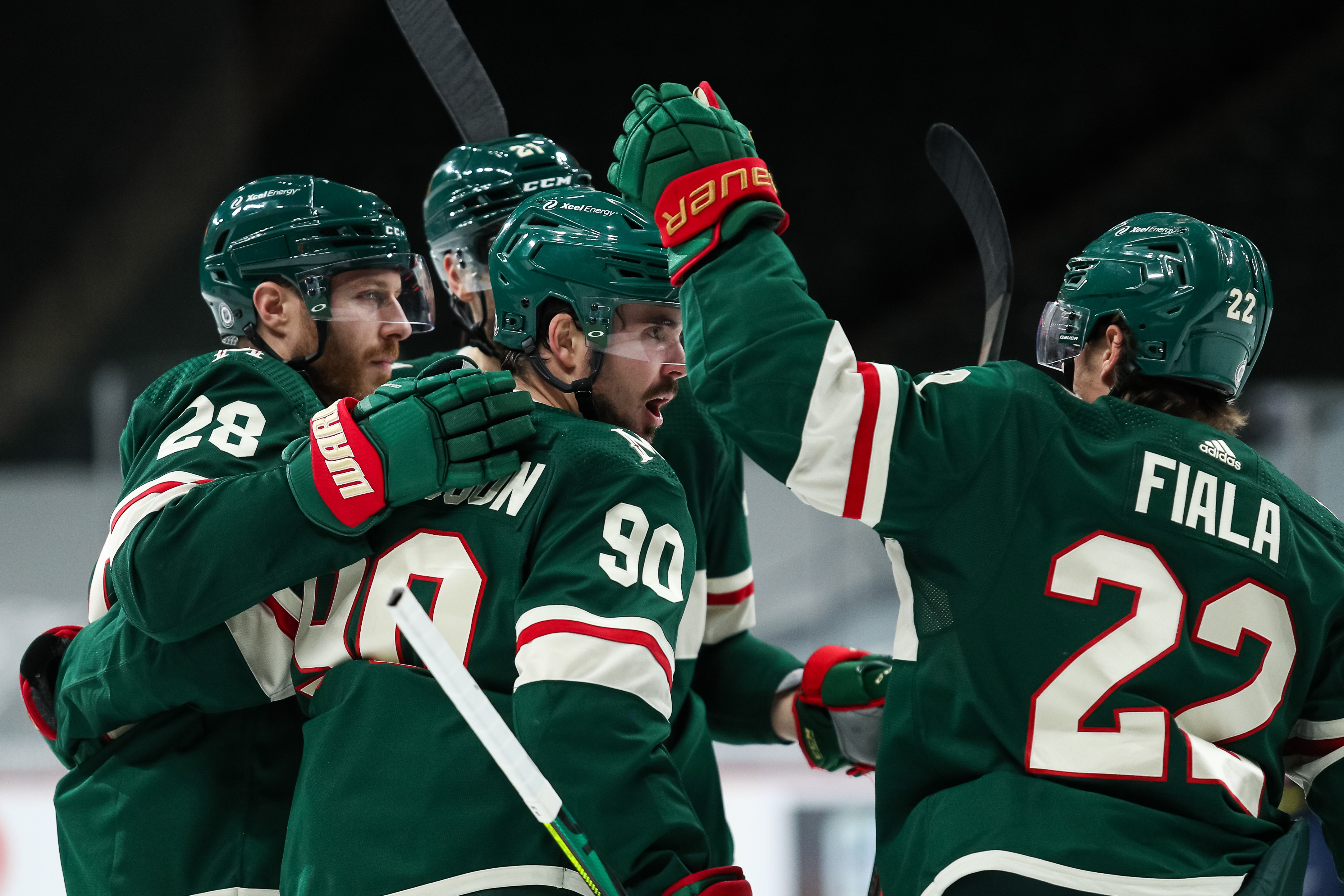 Well, things started off with the drop of the gloves with the drop of the puck. The early combatants being Brayden Schenn and Ryan Hartman. Not much came of it, but okay. The power play would come early to Minnesota with Vince Dunn called for cross checking. Not much would come of it, though better chances came in the second minute. Jonas Brodin would get tagged for holding shortly after the end of Minnesota’s power play. Having Matt Dumba back in the lineup certainly makes a difference in all parts of the Wild’s game. All in all, I feel like the early fight and a power play for each team has simply been a way for these two teams to get a feel for each other. I will admit to being surprised at seeing Cam Talbot getting the start in goal, considering he started last night against Anaheim. I guess this is proof that we will never understand the thought process with this team.

Sadly, the shot differential would be evident in the first period. Minnesota would get their second power play of the period at the midway point of the opening period. In over ten minutes, the Wild have managed a single shot on goal, compared to the Blues’ five shots on goal. This team needs to find a solution to playing Ryan Suter so much on the power play. He has this insane ability to slow the power play down even more. Pedantic would be the best word for his style of play. After the completion of the power play, Minnesota has only 2 shots on goal, which again doesn’t bode well for this game. There are moments when Minnesota can move the puck, but then they struggle getting the puck out of the zone. Carson Soucy would take a penalty with just under three minutes remaining in the first. Minnesota would successfully kill the penalty, and should feel lucky that they went to the locker room with a 0-0 tie. They also headed to the locker room with a sad 2 shots on goal. They need to find more energy and determination during the intermission.

Well one issue that Minnesota has to be concerned about, it their ability to get caught with the Blues sneaking in behind the Wild skaters. They have the speed and talent to then create either a breakaway or an odd-man situation. And if it’s Suter they get behind, well good luck with that. Things weren’t really improving when it comes to shots on goal. It felt as if there were really even attempts being made. So much work to get into the zone for nothing to come of it. As you’re starting to feel as if you want to take a nap, Kevin Fiala made a diagonal pass, bringing to defenders to him, to an open Marcus Johansson with a very open net behind Jordan Binnington. That may be the prettiest goal that the Wild accomplish tonight, as that goal was Minnesota’s third shot of the night.

With just under nine minutes remaining in the second, Kirill Kaprizov would get called for hooking. Probably the most interesting part of the game is when the puck got stuck in the cage portion of Talbot’s mask. As Wild color commentator Ryan Carter said, if it had happened to him, he would have been like “I’m done.” I swear, I never know what to expect when it comes to Kaprizov. After a great pass by Mats Zuccarello, Kaprizov was able to change speed on Torey Krug and got him to bite. That bite turned into getting past the Blues’ defenseman and get the puck past Binnington. If only we could clone him. As the second periods winds up, we could see some fireworks later in this game. Zach Sanford pushed Nick Bjugstad hard into the boards with no call. As a show of support Nico Sturm went toe-to-toe with Sanford, which earned both players 5 minutes for fighting. Minnesota would head to the locker room with the 2-0 lead, with only eight shots on goal.

Do I dare say it, but are we finally seeing some chemistry? Has Fiala finally found a line with Hartman and Johansson? It’s almost looking like the chemistry that Kaprizov, Zuccarello, and Victor Rask have found. I hope it holds true, because how sweet would it be to have two extremely potent and speedy offensive lines. And then when Fiala draws a penalty, he gets to work with Zuccarello and Kaprizov on the power play. While that power play came up empty, but they were able to maintain the offensive zone for much of the two minutes.

I don’t know how Minnesota is managing the pace they are with the limited shots on goal. Perhaps, St. Louis has taken a page out of Minnesota’s book when it comes to how one plays after a break in the action of several days. The Blues have been waiting for this game. While they’re getting the shots and do show more skill on the ice, nothing they’ve done has really connected. Truth be told, the Blues should look even more pumped and speedy than they are showing. I’m not going to complain however, since the Blues are a team that can easily make Minnesota look bad. While Fiala and his new line has shown some ability, they still pass too much. They had a 3-on-1 chance but Hartman decided to pass instead of take the shot himself, which then ended any chance of a rebound. With just over three minutes remaining in regulation, Blues would pull their goaltender. In the end, the Wild would come out victorious, earning a shutout for Talbot, and did so with only 11 shots on goal.

What did you think of the Minnesota Wild’s game against the St. Louis Blues?  Tell us on Twitter @CreaseAndAssist! 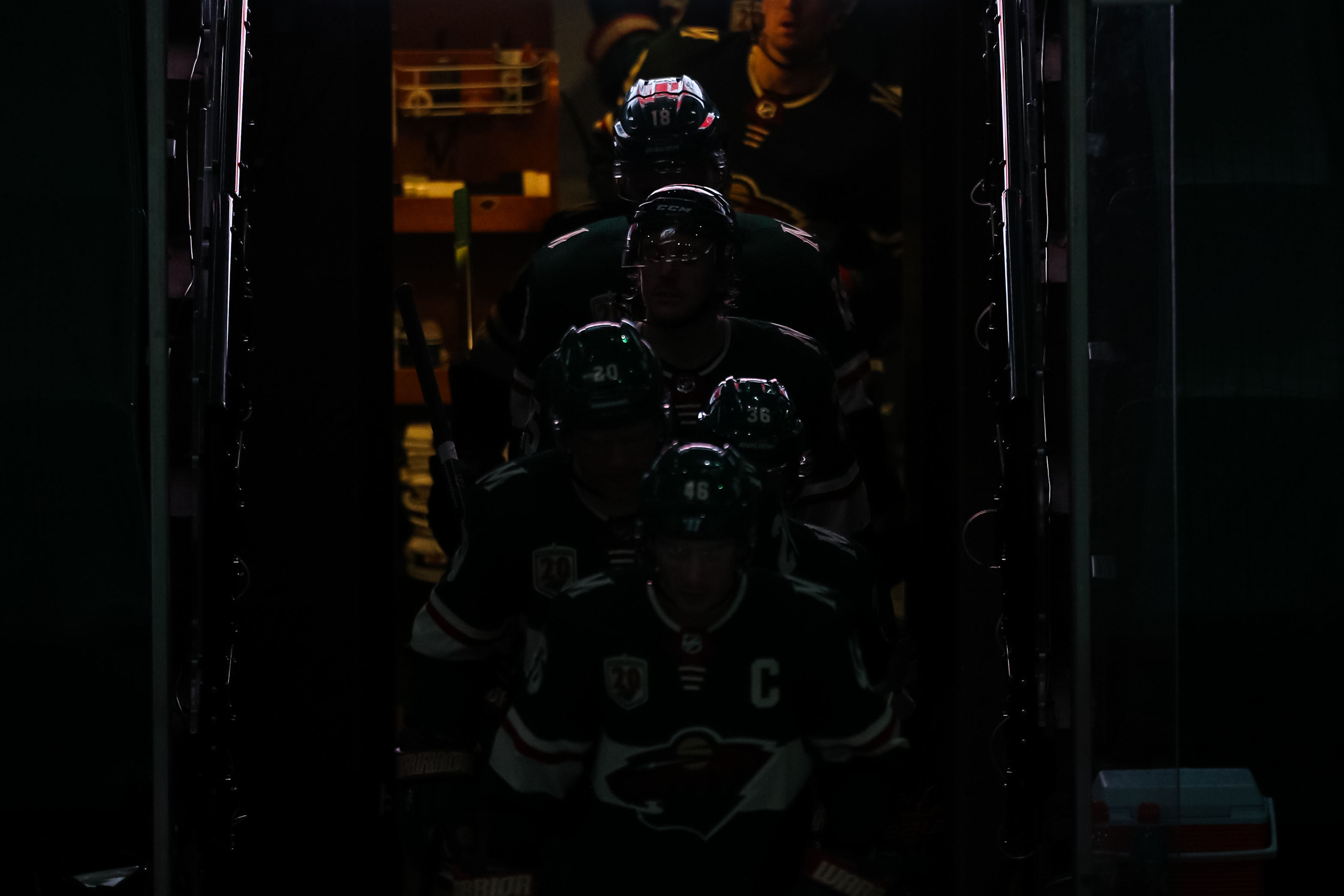 Mar 10, 2021; Saint Paul, Minnesota, USA; The Minnesota Wild come onto the ice before the start of the third period during a game against the Vegas Golden Knights at Xcel Energy Center. Mandatory Credit: David Berding-USA TODAY Sports

Usually around Friday of each week I try to put together the templates for the week’s slate of games.  It was then that I noticed the 4:30PM game, which would not have been completely unheard of if it had occurred on a Saturday or a Sunday but a Wednesday?  I asked a friend of mine who works at some of the games, why that was the case.  He said he had no idea.  Then later the Athletic‘s Michael Russo confirmed it was because the game was going to be the start of a triple header on NBC Sports Network.

Like many Wild fans I was thinking, “really?!?!”  Whether fans can attend or not, why would you want a game to start at 4:30PM when many would probably be commuting from home or about to start their commute home from work?  As difficult as it would be for a Wild fan to get back in time it would be even more ridiculous for Ducks fans who would have the game start at 2:30PM.  So why schedule a West Division game so early?  This is just speculation, but probably because NBC Sports Network feels they will get better ratings by having the Buffalo Sabres / Pittsburgh Penguins game on at 7:00PM CST than the Wild / Ducks.

An extremely early mid-week game is rather unusual, especially considering it doesn’t coincide with any holiday.  Yet there has also been the penchant for the three California teams and Vegas to schedule games at 9:30PM.  Meanwhile Minnesota has started games ‘early’ to accommodate Eastern Conference clubs so their fans don’t have to stay up too late.  But they don’t mind making midwestern-based fans like us stay up until well past midnight to watch games.

I realize that with Covid scheduling has been a nightmare, but these minor schedule tweaks seem to be ignorant of our fanbase and I think its about time they start to feel some pushback.

D – Simon Johansson (Mora IK, Allsvenskan) ~ The lanky blueliner was loaned to Mora IK which plays in the Swedish minor league system, and he had a big impact in their latest game with a goal and an assist in a victory.  Johansson has a goal, 2 points, 2 PIM’s and is a -1 in 2 playoff games.

Let’s Play Hockey announced the 10 Finalists for the Ms. Hockey Award given to the best female player in the state of Minnesota.  Here they are in no particular order.