Your Morning Dump... Where we wonder if Fournier is enough 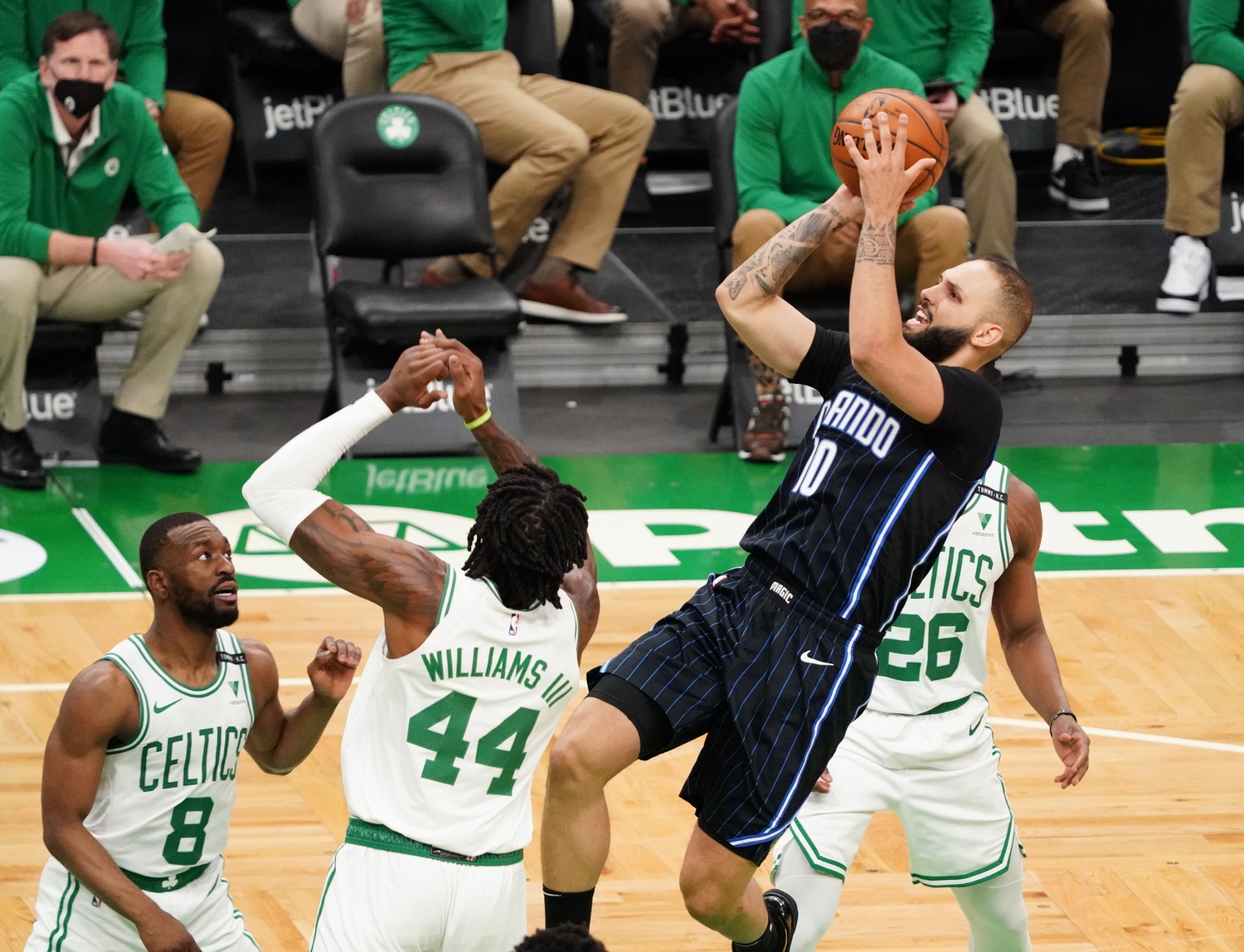 Your Morning Dump... Where we wonder if Fournier is enough

Well, Danny Ainge did something. Exactly what is still a bit of a question.

The Boston Celtics acquired Evan Fournier from the Orlando Magic, absorbing him into their traded player exception for two second-round picks. They also traded away Daniel Theis, Javonte Green, and Jeff Teague to get Mo Wagner and Luke Kornet. Boston is reportedly sending out a pair of seconds in this deal as well.

In the short term, it gives Boston some help this season. Fournier is a 6-foot-7 wing shooting 38.8% on 3-pointers and averaging 19.7 points per game on 14.2 shots. For the first time in his career, his true shooting percentage is up over 60 (60.4%), so he’s been having himself a nice overall season with the Magic.

There’s a lot of handwringing in Celtics nation about the C’s move yesterday. John considers this a kick-the-can-down-the-road move (literally: He uses that metaphor in the article), Ryan Bernardoni has a take on the move that is morose:

Well that day was a continuation of a 2.5 year disaster performance by the front office, imho

I’m choosing to be optimistic, though.

First off, Bernardoni’s takes are predicated on the notion that Wyc & Co. do not want to pay luxury tax. In that, he’s misremembering what Wyc actually said:

“You’ll see,” Grousbeck said about whether the Celtics will become a tax-paying team. “We have been and you’ll see it again. We were going to be this year until the pandemic and everything else changed things. We’re a consistent taxpayer and would be in our mind, contenders. That’s how we want to run this team and we want to get back to that status as soon as we can.”

In a lot of ways, this feels like the C’s acquisition of Isaiah Thomas in 2015. IT was younger and the C’s were a lot less talented, but in both cases, the C’s were in desperate need of more scoring. Fournier may end up, depending on the rotations, logging a fair bit of time with bench players and feasting on the scoring opportunities that presents.

Again, I don’t know how Fournier’s all-around basketball IQ stacks up, and I don’t know what he’ll bring to the table defensively, but honestly, landing Fournier for a couple second round picks replaces a pretty significant chunk of what the C’s lost when Gordon Hayward left. Enough, perhaps, that the balance can be made up by the overall progress of the rest of the C’s young players.

One of the things that annoys me about the gloom-and-doom surrounding the C’s team this season is the notion that the team has collectively forgotten how to play defense at an elite level. The team’s poor defensive play this season is generally considered without context. It is simply assumed that this is a permanent state of affairs with no ascertainable cause and, therefore, no possible solution.

No thought is given to the possibility that the extra load the Jays have to shoulder on offense affects the effort they can expend on defense.

I mean, it’s not like these guys have a bottomless reserve of energy that they can draw from so as to work harder on offense while working as hard as they have in the past on defense.

From that standpoint, adding a high quality offensive threat may well lead to a much improved defense.

I guess your take on yesterday’s move hinges on your view of the rest of the C’s roster.

If your opinion is that the C’s need significant improvements in several areas in order to be contenders, then this was just a band-aid move.

But is that a reasonable view of the team?

Because I like cars, I’m going to use an analogy involving cars.

Let’s say you’ve got a genuine Shelby Cobra. Like, the real thing. A British AC Ace modified back in the ’60s by Shel himself: 1964 AC Cobra 289 (silodrome.com)

The engine in this car was designed to run on leaded gas and as it’s a high performance car, it requires extremely high octane fuel if there’s no lead in it. Lead was added to gasoline back in the day not because people loved putting poisonous stuff in stuff that was already pretty poisonous, but because lead was a great way to prevent gasoline from detonating on its own before the spark plug fired.

Now say you aren’t paying attention and you put good ol’ 87 octane gas in the tank. When you pull away from the station, you hear a *pow* and all of a sudden you’ve got black smoke coming out your exhaust.

Your car, which exists pretty much to race and nothing else, can’t go very fast at all. In fact, to prevent further damage you shouldn’t even drive it until it’s fixed.

So what’s the solution?

It’s pretty simple, provided the only thing you’ve done is burn a piston: You replace that piston and a few other related parts. Out of all the thousands of parts in that car, you need to replace only a handful to get the car back up to speed.

Now cars and basketball teams aren’t the same thing, but they’re similar in that they have a lot of moving parts that have to work together. And sometimes you need to replace a lot of parts if the ‘machine’ isn’t working properly. But that’s not always the case.

I am, and have been all season, of the opinion that this team needs what seem to be small fixes, not a major overhaul.

Page 2: Where we look at the long-term costs of keeping Fournier

Thursday’s maneuvers strengthen the evidence that ownership is not going to greenlight a long-term deep dive into the tax, something that league sources have been cautioning since the last offseason. It’s no wonder they moved to get away from the repeater tax, as going just $20 million over the tax line can push the bill to $65 million. Increase it to $30 million and the tax penalty nearly doubles. Leaping all-in with retaining the core and crossing the luxury tax line by $40 million would cause the tax bill to possibly exceed the actual payroll. Golden State’s ownership can handle it when their new stadium sells tickets to its subterranean layer for the cost of a Tesla.

The Celtics don’t seem to be playing with monopoly money and it’s genuinely concerning that they may not maximize the window with Tatum and Brown. Maybe that is coming in the offseason somehow and they can mortgage the future while moving Walker. But it seems like the team is either going to have a turnaround they don’t seem capable of, or there is going to be a longer and more painful roster reset ahead.

The C’s fan base—-including a few of the guys who are paid writers—-has occasional bouts of amnesia.

November was a long time ago, when you’re talking basketball games played.

But c’mon guys. It’s been barely four months since scenarios were being floated involving the C’s signing a long-term contract with Gordon Hayward.

Now all of a sudden, a team that was prepared, we are told, to offer a $100M deal (give or take) to Gordon Hayward, will not want to spend any money on Evan Fournier?

The luxury tax is player agnostic. If you’re spending $25M a year on Hayward instead of Fournier, your tax bill is going to be exactly the same.

And I, for one, do not see Boston’s moves to keep them below the tax this year as indicating that they have no desire to pay the tax in the future.

The repeater penalties are incurred regardless of how much you exceed the tax threshold in any given year.

If you are one dollar over the tax threshold, you’re on the hook for full repeater penalties, the same as if you’re over by $10 million.

So it makes perfect sense for the C’s to dip below the tax line rather than stay above it and keep a guy that they were probably going to lose this summer anyway.