Rapid Recap: Timelord blasts off as Celtics shoot down Rockets, 118-102 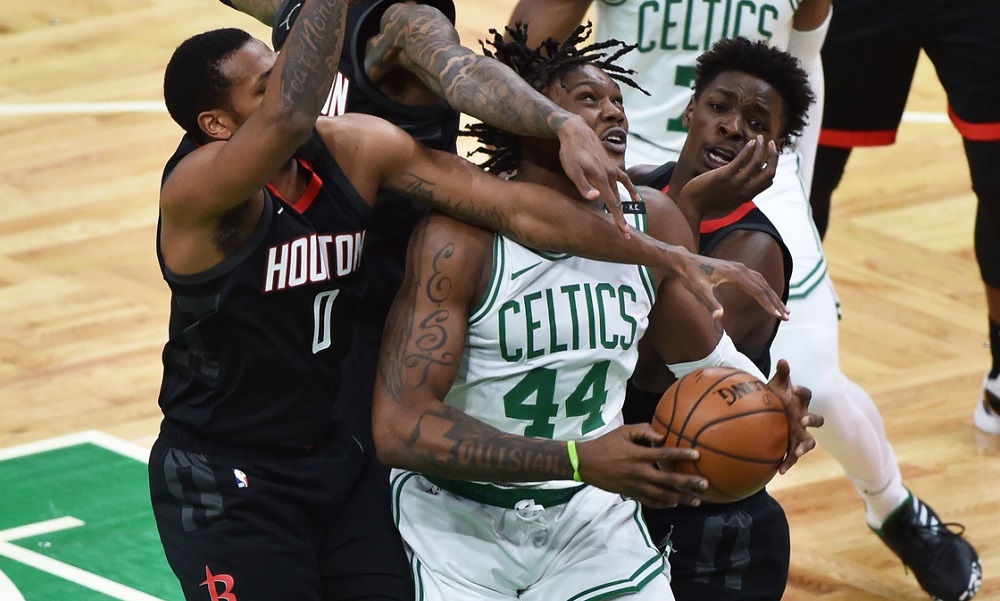 Rapid Recap: Timelord blasts off as Celtics shoot down Rockets, 118-102

Rob Williams had his best game as a pro (career-high 20 points, 9 of 9 FGs, 9 rebounds, career-high 8 assists, 2 blocks), Evan Fournier found his shot (career-high 7 threes, 23 points), and the Celtics rediscovered ball movement (season-high 35 assists), all leading to a 118-102 defeat of the Houston Rockets.

And by the way, Jayson Tatum and Jaylen Brown added 26 and 22, respectively. Marcus Smart had 10 assists and Kemba Walker rang up 8 dimes.

The Cs wore down the Rockets with their passing and shooting (52.3%, with 17 of 41 threes) until Fournier caught fire late (20 points in the fourth quarter) to blow it open.

The only negative was Jaylen left the game after suffering a bruised knee in the fourth.

Lineup for this evening ⤵️ pic.twitter.com/5c82tCPqAC

The Celtics just had the ultimate "trust your teammates" possession. It looked like Tatum was going to go iso but he gave it up… the ball touched the paint, kicked out, and swung back around to Tatum for a 3.

Frame that possession. Hang it in the MFA

Sequence of the night for the Celtics. pic.twitter.com/rwu8VB58FK

Boston closed the half with a 9-0 run.

Just so it’s totally clear Timelord is +15 for the first half tonight. Can he start alone in the second half?

Rob Williams is the high point of this season

Rob’s energy is EVERYTHING ☘️

Robert Williams is playing really well for the Celtics. Great effort on the boards to create FTs, and is now up to 14 points on 6-6 shooting, 9 rebounds and 4 assists in 17 minutes. These final two months are a big opportunity for him to solidify himself as a starting center.

Robert is the fucking man

The no dribble fast break 👌

Which is more than the team’s season average (22.9) entering the night.

Evan Fournier has made 5 3s in the fourth quarter alone, and has the Celtics up by 18 with six minutes to go. Meanwhile, Jaylen Brown is headed back to the locker room with a couple of trainers.