Wild Sweep the Golden Knights with a 2-1 Victory 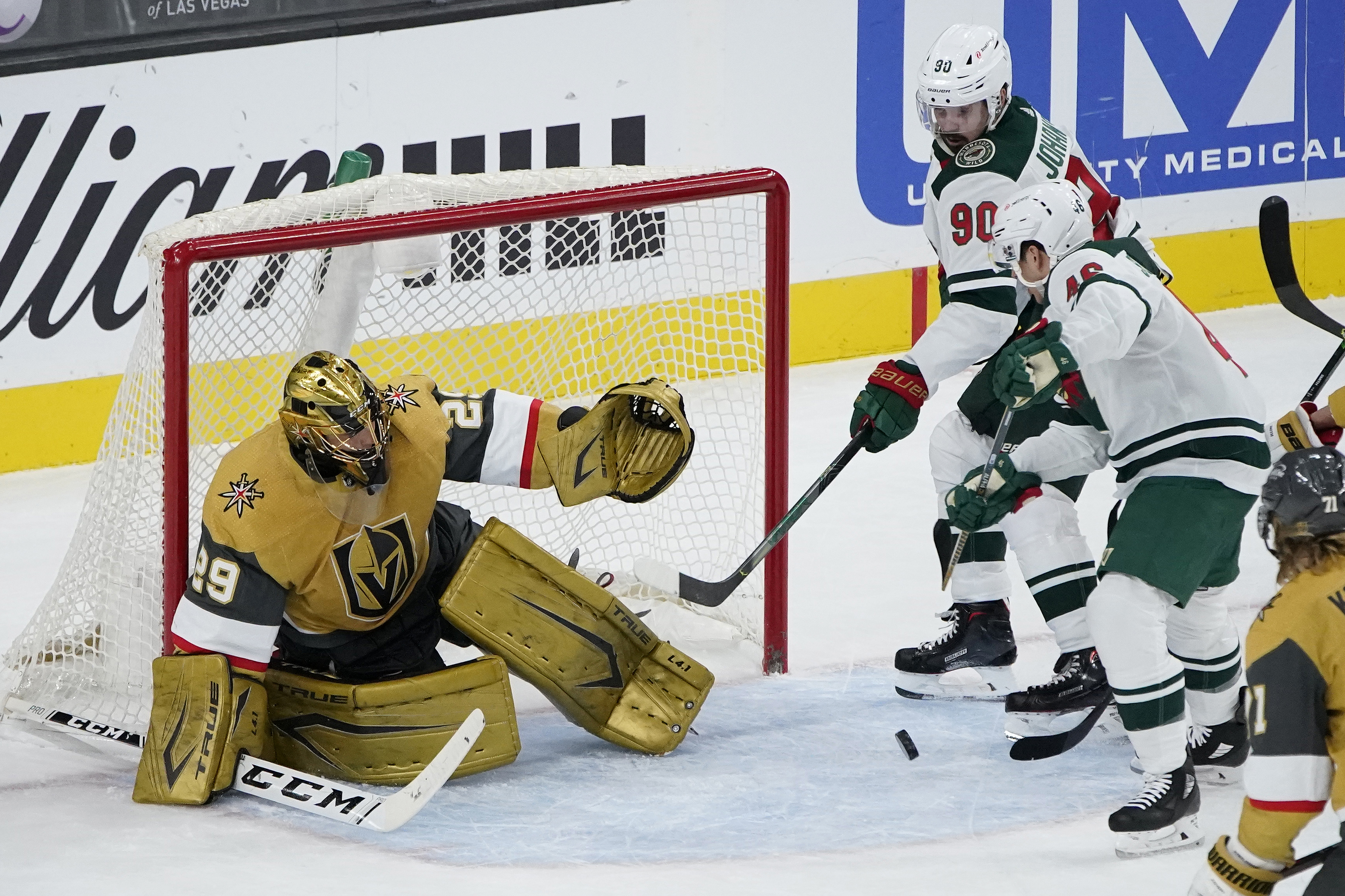 Wild Sweep the Golden Knights with a 2-1 Victory

It was somewhat expected that after playing with a reduced lineup due to some late injuries and losing to the Wild 3-2 in a shootout that Minnesota would face a very motivated Vegas Golden Knights squad.  That was evident right from the puck drop as the pace of play was extremely fast as the Golden Knights were trying to use their tremendous team speed to try to put Minnesota on its heels.  At certain points, you could definitely say the Golden Knights had Minnesota scrambling about its own zone.  Cam Talbot certainly had to keep his head on a swivel as shots were being taken from all over the offensive zone.

Vegas would break the stalemate off the rush when Tomas Nosek sort of redirected a shot on goal that fluttered by Talbot to give the Golden Knights a 1-0 lead.  This would finally get the Wild moving its feet and going on the attack themselves.  The line of Victor Rask, Nick Bonino and Kevin Fiala caused some havoc by swarming down near the Vegas goal but Marc-Andre Fleury was up to the task to stop Rask’s rebound chance from near the top of the crease.  Physical play was also evident as the Golden Knights were finishing checks with regularity and trying to agitate the Wild’s star players like Fiala and Kirill Kaprizov whenever the opportunity presented itself.  The Wild and Golden Knights continued to share chances throughout the period but Minnesota would go into the 1st intermission trailing 1-0.

The game continued to be fast paced with plenty of chirping after the whistle as Fiala seemed to be in a personal war with Vegas’ Jonathan Marchessault.  Marchessault repeatedly kept barking at Fiala after shifts as though trying to goad Fiala as it was clear it was part of the Golden Knights to try to get into the head of the Wild’s star talent.  The Golden Knights continued to push the pace offensively causing Minnesota’s defense to scramble but they had some close calls as Marchessault ripped a shot that was deflected up and over the net by Talbot.  Minnesota had some promising opportunities of their own, the best coming off the stick of Marcus Johansson who tried to jam one home but Fleury would cover it up for a whistle.  Yet as the period ended, Fiala continued to chirp at Marchessault, Alex Pietrangelo and any other Vegas Golden Knight that was nearby.

Minnesota would try to put those distractions behind them and they’d go to work on trying to tie the game.  A power play would finally give them an opportunity to light the lamp and with a little persistence the Wild moved their way in close and it was Kaprizov tapped home a pretty diagonal pass by Joel Eriksson Ek to tie the game.  With Vegas still a bit stunned from Kaprizov’s goal, the Wild would take the lead as Eriksson Ek would bang home his own rebound after receiving a pass from Jordan Greenway to give Minnesota a 2-1 lead to a stunned 3,900+ at T-Mobile Arena.  The next few minutes, the Wild locked things down, forcing the Golden Knights to settle for shots from the perimeter while giving Vegas very little in terms of time and space.  You could see how frustrated the Golden Knights were in the closing minutes as Mark Stone was chirping after the play, annoyed at the team that just wouldn’t go away.  The Wild continued to block shots and disrupt passes and not giving up almost any free ice to Vegas.  Talbot was again brilliant down the stretch, staying calm with Golden Knights forwards crashing the crease with regularity but he was able to come up with the stops to give Minnesota a 2-1 victory.  He had 27 saves in the win.

What did you think of the Minnesota Wild’s series against the Golden Knights?  Tell us on Twitter at @CreaseAndAssist! 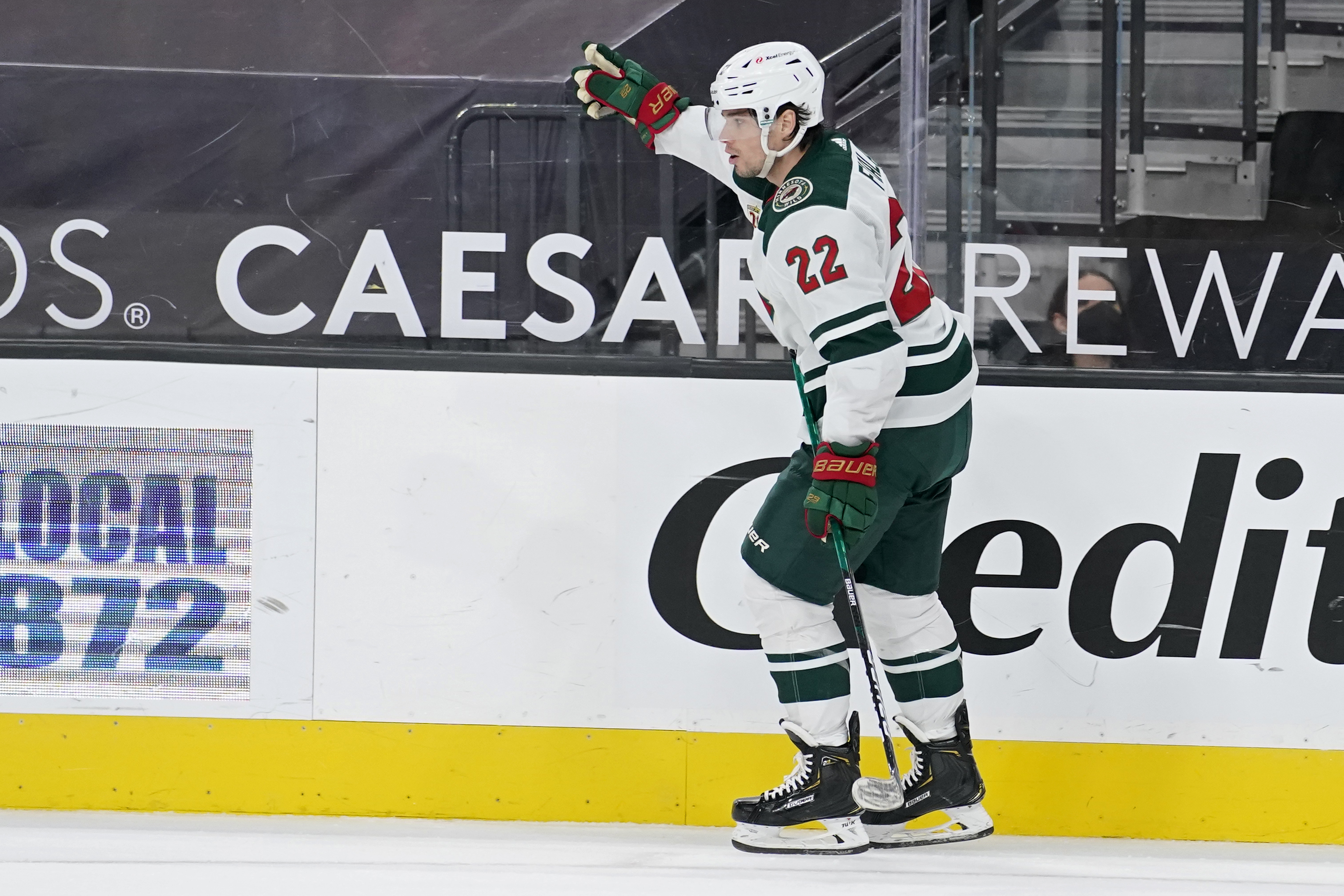 Watching the games as I have this season, most of the time I have opted to watch the opposing broadcast.  The recent transition to horrid display that is Bally Sports certainly has made that choice pretty easy, but the main reason I do this is to hear an outside perspective on the team.  I think its healthy to step out of the Minnesota Wild echo chamber once in a while.

While a lot of those broadcasts focus their attention and discussion on Kirill Kaprizov, more and more are now noticing just how impressive Kevin Fiala is.  The player called a ‘gamebreaker’ by former Wild General Manager Paul Fenton shortly after the team traded fan favorite Mikael Granlund for him, may wish he has more than the 10 goals he has currently, but it ignores the many things the young Swiss-born forward does for the team.  When Fenton made that declaration, Fiala initially struggled causing people to question that assessment.  But as we have learned with lots of Fenton’s moves during his time as the club’s general manager he probably deserves more credit for being the savvy eye for talent that he is.

The ‘gamebreaker’ is becoming more than just a goal scorer, as he is showing himself to be an all situations player as he’s being used more and more on the penalty kill as his speed and lower body strength help make him a pesky defender.  He is also showing himself to be a deft playmaker, using the fact he’s always a threat to shoot to open up passing lanes to set up teammates.

Fiala said after last year’s playoffs he has tried to work on staying calm after he admitted he got frustrated in the Wild’s series against the Vancouver Canucks.  I am sure this year has tested that new resolve as he’s had to endure a revolving door of linemates as the team has tried to establish some chemistry throughout the season but more recently he seems to be settling in and making the best of it.

As much discussion as there has been about the Minnesota Wild’s next deal to Kaprizov, an equally challenging situation will be what the team offers the Fiala.  No doubt it will be significantly more than the $3 million per season he’s making currently.  My guess is he ends up with a contract that will pay him closer to $6 million per season but his contract is one of many that Wild General Manager Bill Guerin will have to deal with this summer.

The Iowa Wild have had their share of struggles in Texas but they may be on their way to turning that around.  Texas really poured it on early in the game, peppering Hunter Jones with shots but the former Peterborough Petes’ star looked calm and collected as he kept Iowa in the game.  Iowa was only able to create a few chances, but for the most part they kept Texas to the perimeter of the ice.

In the 3rd period, the Stars tried to change things up between the pipes by swapping out point for Tomas Sholl but it didn’t matter.  Iowa would extend its lead as Connor Dewar would score his 8th goal of the season off a nice pass from Mitchell Chaffee.  Iowa would then add another goal a few minutes later as Jarrett Burton scored on a nice setup by Bryce Misley for his first professional point.  The Stars still couldn’t solve Jones and their frustration boiled over as they started to take runs at Wild rookies that drew the ire of veterans and the last few minutes saw a few fights.  For example the Stars tried to grind Damien Giroux into board dust which caused Mitch McLain to step in to defend the youngster.  Or when they tried go headhunting on Addison, it was Mason Shaw, all 5’8″ of him going toe-to-toe with Texas’ Riley Tufte and all 6’6″ of him.  The team continued to circle the wagons around its goalie and its young players and they’d roll to a 4-0 victory.  Jones had 36 saves in the win.

D – Daemon Hunt (Moose Jaw, WHL) ~ The young defenseman had a power play goal on 6 shots but finished with a horrid -4 in the Warriors 8-5 loss to Swift Current on Wednesday night.  On Friday night, Hunt added another assist with 1 shot on goal in Moose Jaw’s 4-0 win over Saskatoon.  Hunt has 5 goals, 9 points, 11 PIM’s and is a -8 in 11 games.

High School Hockey Report:  The Boys and Girls State Tournament wrapped up the 2021 season today at Xcel Energy Center.  For the first time ever, both competed on the same day.

Also, for your entertainment pleasure, John King of Game On! Minnesota published another beauty, the 2021 Minnesota All Hockey Hair team, watch, view, share and please consider donating as it helps a great cause in the Hendrickson Foundation!  The athletes certainly grew out the salad during this Covid induced isolation and a few clubs also busted out the Clorox too, so thanks to Mr. King and Game On! Minnesota for helping celebrate Minnesota’s proud flow history!  Thanks to Arby’s for supporting a great cause!

Congratulations to all of the teams that competed and made it to state whether you had the chance to play or not as its still a remarkable accomplishment in any year.