I’ll be honest with you boners.

The Recap on Sunday took it out of me.  Way too much of a circus.  The Job That Actually Pays My Bills has been kicking my ass 25 hours a day.  I’m as addicted to golf as Randy is to cheeseburgers. 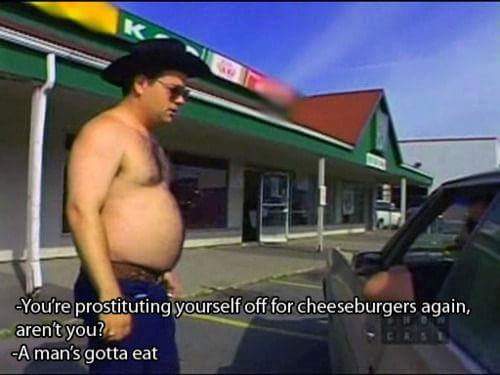 What I’m trying to say is I haven’t thought about hockey since I hit “publish” last Sunday (it was my best work to date though, no big deal).

As it were, it wound up being the second-to-last tilt of the season with the Rangers.

Bottom line – was hoping for a low-scoring affair tonight.  Let’s see how that shook out.

TRISTAN.  SO GOOD TO SEE YOU.

Just kidding.  Shit ass goal off Father Matheson’s skate before I could even finish my Wendy’s Jalapeño Popper sandwich.

Pens responded well with a bunch of chances, none better than Rodrigues all alone in the slot, but Shiskabob made saves.

Rangers hit a post, then came down off a Crosby turnover 10 seconds later and buried a big thick juicy rebound.  Balls.

Then Zohan took a penalty sending the Pens to the PK, and you felt like it just might be one of those nights.  Gulp.

Tim Peel radio’d into MSG advising the refs to even things up, and they obliged with some penalty on Crosby that I barely noticed.  Jared McLegend made quick work of it.

Did you know that Jared McCann has eight points (5G-3A) over his last seven games?

…Or that he leads the team with five power-play goals this season? pic.twitter.com/pVvrC4qcfW

The goal seemed to energize the Pens.  Rust, McCann, Crosby, and Zucker all had great looks.  Rodrigues and Gaudreau were falling down.  Shiskabob making saves. That Weeknd song played at like 765 decibels.  Our pets heads are falling off.

Then, Dumo took a penalty right at the end of the period it was an absolute killer.

I mean what can you say.  Overall, a genuinely good period for the Penguins skaters.  They had 19 fucking shots and most of them were filet mignon variety.  The difference was Shestyorkin made the saves and Jarry didn’t.

Gotta be honest.  I found myself envying the children of the local sports subscription site writers.  I know they would have sent my bitch ass to bed rather than subject my tender little eyes to such a disgusting display of effort. SHAME ON YOU, PENGUINS!  I’m sure we’ll read all about it tomorrow.

Unfortunately, Recap duty means going down with the ship.

Pens to the power play on a Dolph Lindgren high stick.  The first unit peppered Igor but he wasn’t allowing shit.

Rodrigues had a breakaway opportunity to make the game really interesting, but he hit the goddam crossbar.  You know what that means.  A couple minutes later…

Lafreniere and the Kids Line puts this one in! (with a little help from the Pens 🐧) pic.twitter.com/iOvat9Exi5

Can only say “one of those nights” so many times before you give yourself a headache.

Even best fathers and best sons get mad at each other.  It was my turn to be mad at My Father Matheson for immediately reeling me back into this shit pipe game.  Still, he is so damn good.  #ThankYouJimRutherford

Somewhere after, the Crosby line spent like 9 hours in the Rangers zone, then changed and the Rags got a breakaway.

No blood as the period ended with more Pens opportunities that went unrewarded.  I believe the tally was 31 shots, but don’t quote me.  I’m no paleontologist.

4 minutes in, Panarin hit the post on a 2-on-0 breakaway.  Guentzel took a penalty on the next shift.  Think I’d rather get a hand job from Mr. Krabs than watch the rest of this game.

You know what happened.

Guentzel scored a meaningless goal a couple minutes later, but how about the play from Father Matheson?  Get real.

Then, well.  Matheson giveth and Matheson taketh away.  Brutal turnover on the power play.

Honest to God, I was thrilled when those last two goals were scored.  Woke me up, and also it’s usually good to get a game like this out of your system (assuming you’re not a coward like the Philly Flyers).

Dumo FINALLY scored a goal, which fittingly mattered less than those people who spray perfume on you at Macy’s.

I’m gonna give Dumo the benefit of the doubt and say his stick got caught up on the reaction, and he wasn’t actually raising his hands to celebrate.  Game mercifully ended shortly after.