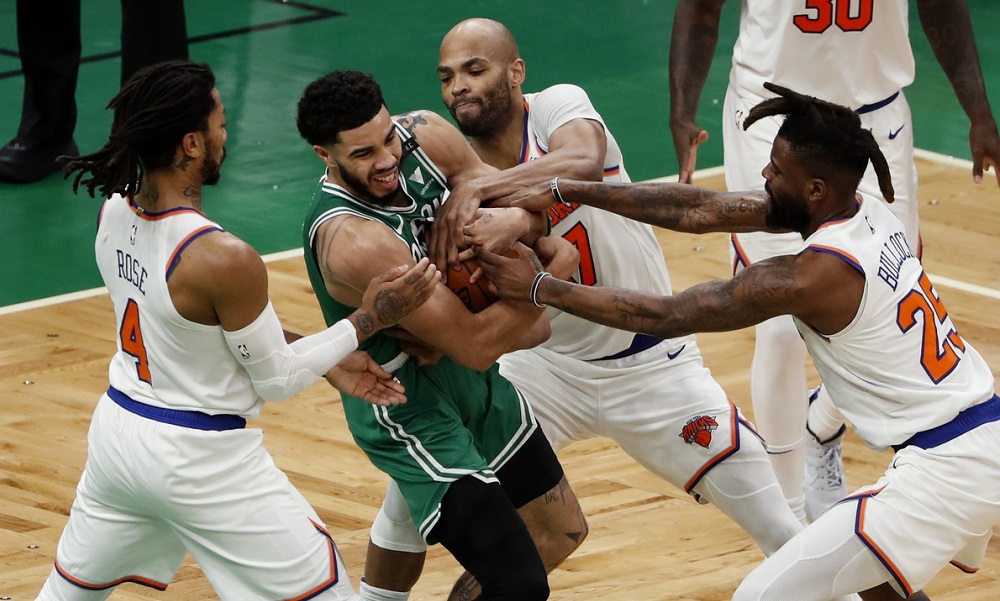 The Celtics and Knicks have been beating the crap out of each other since 1946, and they kept up that tradition tonight in a hard-fought battle won by Boston, 101-99. There were 17 lead changes, 8 ties, and neither team ever led by more than 7.

Jaylen Brown was high scorer with 32 points and 10 rebounds, and Jayson Tatum added 25 points, 10 rebounds, 5 assists, and a gruesome 8 turnovers. But just as important were Tristan Thompson (returning from a month in Covid protocols), 7 points, 8 rebounds, a lot of grit and plus-24 in 22 minutes; and Marcus Smart, 9 assists and quiet offensively until exploding for 14 points in the fourth quarter.

Both teams shot 41% from the field, and the Celtics committed 20 turnovers for 21 Knicks points. However, Boston owned the boards, 53-39, and had 16 offensive rebounds for a 20-7 advantage in second-chance points.

RJ Barrett had 29 points and Julius Randle 22 for the Knicks. New York fell one game behind the Cs in the standings.

No Kemba, no Fournier, and there was a new face in the starting five:

Ooh this layup by Jaylen Brown was sweeeeet pic.twitter.com/gevobP32WB

D-Rose hit the 3 to close the 1Q but that was still one of Boston’s better defensive quarters of the season. Great effort, everyone playing on a string, etc. C’s are gonna need a lot more of the same moving forward.

Romeo with the step-back 3! pic.twitter.com/zrK3Owhp1s

Much different opponent tonight, but the Celtics are contesting just about everything.

Tony Brothers was officiating for the second straight night.

Celtics open the second half sloppy.

22-8 Knicks run going back to the end of the first half.

RJ Barrett has been fantastic tonight.

Tristan Thompson is +19 in only 16 minutes so far tonight. So there's that

Great ball movement by the Celtics.