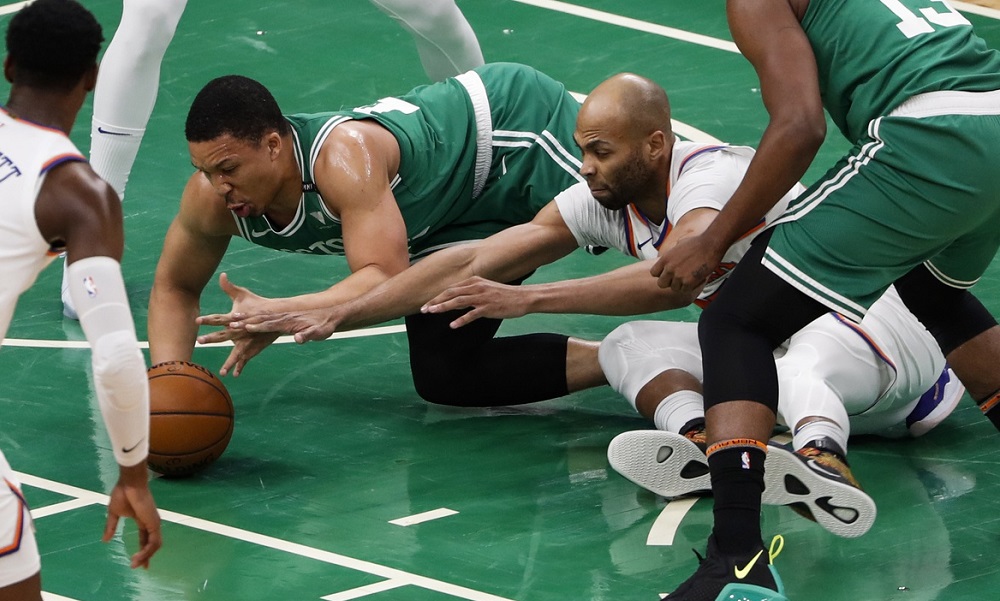 A clash between two teams with identical 25-26 records didn’t exactly sound compelling, but the Celtics-Knicks game turned out to be hard-fought and entertaining, especially as it ended with a Boston win.

The NBA defines “clutch games” as those with a margin of 5 points or less in the final 5 minutes. Last season, the Celtics were 23-19 in those situations, 12th in the league. This season, they are 27th at 12-21. It’s been one of the most frustrating aspects about this current squad.

Last night was different. New York led, 80-73, with 8:20 to play, but the Celtics responded with a 16-5 outburst to take an 89-85 lead. The Knicks came back to tie at 93 with 54.6 seconds to go, and Celtics fans feared the worst again. But this time, the Celts moved the ball, then went to a two-man game with Marcus Smart and Jayson Tatum. JT lured a double-team and dished back to a wide-open Smart, who drained the crucial shot.

Boston then got two straight stops, New York had to foul, and the Celtics made their free throws to nail down a satisfying W.

I've been down on smart this yr but I'm fine with that shot. From basically anyone on the roster. Came off good ball movement and he was wide open. Great game from smart all around. https://t.co/3CvkyOcBHF

Marcus has caught heat from many fans and media during this struggling season, especially for his penchant to launch ill-timed threes. Before last night’s game, he was 1 for 9 from the arc in the last-5-minute clutch scenarios. New York probably wanted him to shoot.

Except this time Smart came through. In those 5 minutes, he scored 10 points, made 2 of 3 from deep, and had 2 rebounds and 1 assist. One of his hoops was a savvy offensive rebound and putback of a Jayson Tatum airball, increasing the lead to 4 with 2:54 remaining. Smart also made 2 of 2 from the line to push the lead to 6 with 11 seconds left. Overall in the fourth quarter, Smart had 14 of his 17 total points.

Thompson solid in his return

Jayson Tatum on Tristan Thompson: "It was great to have him back. We missed him a lot – just his presence out there and how physical he is."

Tristan Thompson hadn’t played in more than three weeks, so when he returned from health and safety protocols, not much was expected. Yet he scored 7 points, snagged 8 boards, blocked 3 shots, and was plus-24 in 22 energetic minutes. His physicality was sorely needed in a game that was about as rough as a regular season game can be under the NBA rules in 2021.

The Knicks under coach Tom Thibodeau have become one of the league’s best defensive squads, while the Celtics have been porous compared to previous seasons. Last night, though, Boston outdid New York, holding their opponent to under 100 points for the eighth time this season.

Knicks All-Star Julius Randle, who had a triple double in his previous game, was kept under control, finishing with a good-but-not-great line of 22/9/6 while shooting just 9 of 23 and committing 3 turnovers.

Jaylen Brown was sensational with 32 points, including a dozen in both the first and third quarters. JB shot 12 of 26 despite making only 5 of 13 from the arc, adding 10 rebounds and 3 assists.

Tatum seemed to be struggling much of the game, probably because he kept throwing the ball away (8 turnovers, ugh). He also persisted in isolating for sidestep threes when he wasn’t truly hot (3 of 9). But when the final buzzer sounded, JT had exactly another 25/10/5 game, shooting 10 of 21. He also had 7 points in the fourth quarter.