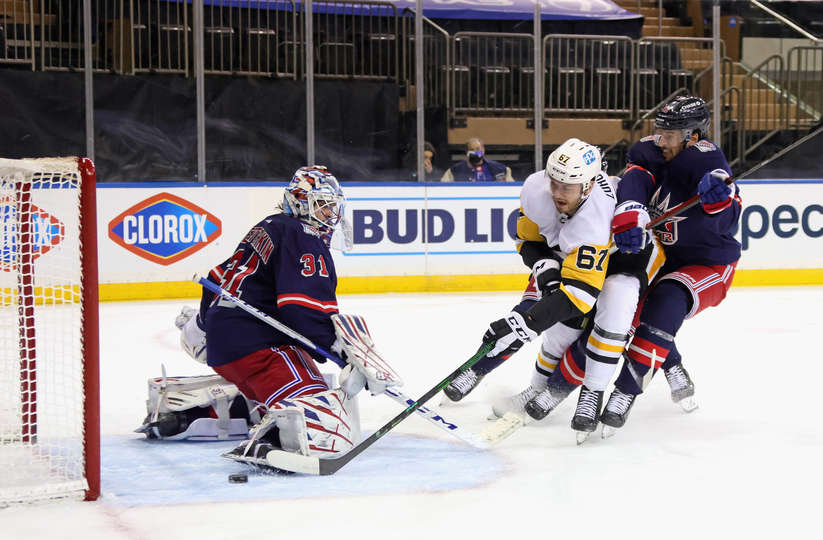 NEW YORK, NEW YORK – APRIL 08: Radim Zohorna #67 of the Pittsburgh Penguins scores at 6:26 of the first period against Igor Shesterkin #31 of the New York Rangers at Madison Square Garden on April 08, 2021 in New York City. (Photo by Bruce Bennett/Getty Images)

Coming into tonight, the Penguins hadn’t dropped 3 straight games at all this season.  They’ve lost two in a row a few times, but never three.

On top of that, Jarry had won 5 of his 5 starts following getting yanked.

Despite this, and the Penguins offense being what it is at the moment, all of your favorite sportsbooks still had the Rangers as the favorite in this one.

The Penguins and Tristan Jarry are here for you.  They want to win you money.

They also told the sportsbooks to suck it.

It was one of those complete performances that we grew accustomed to in March where the Penguins controlled the puck for the bulk of the night and didn’t really allow the Rangers much when they had it at 5v5 and matched the Rangers for goals in the special teams affair.  Via Natural Stat Trick: 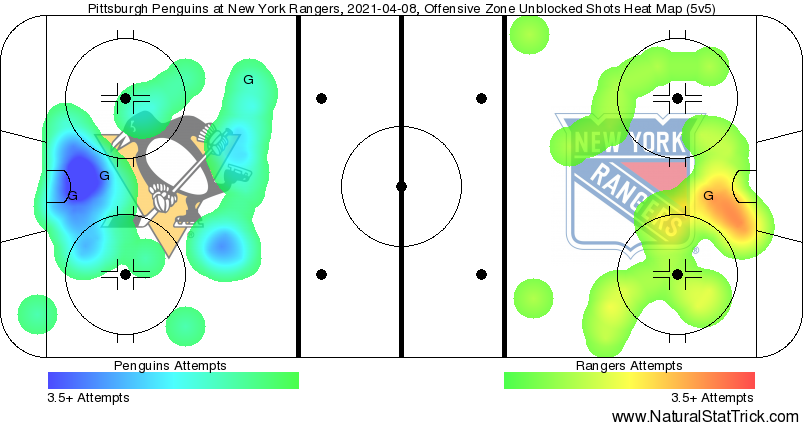 It was, plain and simple, a Response Game.

Still no Blueger despite my idiot assumption in the Gameday that he would play.  Anthony Angello also missed with an injury and is back in Pittsburgh.  So that meant no changes to the lineup that fell 8-4 on Tuesday to this Rangers side.

Same deal for the Rangers, except Howden returned.

Crosby buzzing from the start.  McCann and ERod too.  Jarry dialed in early after the Rangers survived the first few minutes with 2 nice saves.

Pens with 9 shots on goal through the first 5+ or so minutes and were rewarded on the 10th.

Letang makes the goal happen here.  Keep an eye on him in the defensive zone after Crosby deflects the pass.

He collects it, circles behind the net and uses the cage to his advantage.  The Rangers did get in on the forecheck and really put Pettersson under duress, but Letang doesn’t get sucked into the puck battle.  He hangs out, protects the net, and more importantly, gives his team an outlet when they win the puck.

When he does eventually take the pass to release the strong side pressure, the Rangers drop off and give him space to skate into the neutral zone.  As he does that, he sees that there’s nothing there because the now weak side players are all going for a change.  Rather than forcing it, he circles back and let’s the new guys get a de facto set breakout going.

By swinging it back to Pettersson, it moves the Rangers back over to that side of the ice, opening up a stretch pass to Zohorna streaking up the wing.

From there, he’s already got a step on Hajek rushing across as he hits the blue line.  Hajek never really has a chance here as the Big Body Power Move came out to play.

Just a thing of beauty.

Then, the Pens got a chance less than a minute later to double their lead when Trouba went off for slashing Zucker on a powerplay where Rust took a shot off the hand/wrist and DJ Zibad missed shorthanded on a 2v1 after a bad giveaway by Guentzel and Letang getting smoked.

No goals were scored.

With just under 3 minutes left, the Pens got hemmed in their own end and Matheson sent the puck over the glass for a delay of game.  PK pressured well to keep them from getting set up for the first minute, gave up a chance, but killed off the first penalty in the last 4 opportunities to steer the ship into the first intermission.

Total control by the Penguins as they racked up 20 shot attempts at 5v5, allowing just 5 (13-5 shots on goal in all situations, too) to go along with a 9-4 edge in scoring chances and 8-1 in high danger chances.

Just 17 seconds in, Guentzel got caught on the wrong side of Ronnie Radke’s stunt double, hooking him up and hauling him down.  He’s not a vampire.  He just looks like one.

PK looked like it was humming right along, rendering the top powerplay unit of the Rags virtually useless.

But the second unit was able to get set up.

The Pens actually looked okay structurally here.  But as the puck worked up high to the point, Gaudreau gets up to try to pressure.  No one behind him really picked that up, though.  So when Marino does, he finds himself sort of isolated.  Letang recognizes the threat late when Kakko picks up the puck along the wall and tries to get across to deny Buchnevich the feed to the slot, but it was all a little too late.

Buchnevich just changes the angle slightly to be able to hit Blackwell in the soft little area and no one’s missing from there.

But over the boards came the Penguins top line and top pairing to get things really popping off.

Trigger warning: it’s going to be a combination of words that you usually don’t see showered in positivity- “Cerebral” and “Letang.”

Just a super cerebral play from Letang though here as the big boys kept the Rangers pinned in their own zone, including a huge keep in at the point by Dumoulin.

At one point midway through the sequence when the forwards work it back up to Dumoulin at the point, you can see Letang getting primed up to sneak in the back door.

But instead, as Guentzel cycles up high and Dumoulin drives towards the net, Letang peels off and overlaps up high with Bake.

At this point, the Rangers are in a tough situation.  One followed Guentzel, but Dumoulin is taking up both Kreider and Zibanejad in the circle, freeing up a cleanish look for Letang to try to target Rust and Crosby down low.

Kreider, though, gets a piece of it and it’s goal time through Shesterkin’s wickets.

Despite the Penguins best efforts to keep the lead, Jarry seemed that he said Fleury’s name 3 times into a mirror all night when playing the puck,  gifting Chytil with one right after Letang’s goal.

On the heels of this miss, the refs managed the game by giving the Rangers a chance to get it back with a penalty call.  This is a joke.  It was the right call.

Then the Pens got one of their own with 8:42 left when Smith got an extra roughing minor when he and Lafferty got into it in front of the cage.

Crosby was having skate issues, so Zucker and ERod and the rest of the second unit got the start on the peep.

They did not disappoint.

Big FOW from Big Z, but it’s Marino walking the line and manipulating whole PK unit by drawing them out to the right that made this.

That gave Zucker a huge lane to just talk in and as the two PKers on that side chased him, it gave Zohorna and ERod a 2v1 down low.

Playmaker feed out of Z here to make Lindgren look like a dipshit.

Next time Smith and Lafferty got out on the ice again together, they fought.  That’s a thing that still happens in the NHL and they did it and it was spirited.

And with 2:01 left, the Rangers were afforded another best chance of the night to get back into it when Kreider got in behind on a breakaway and got tripped up by a diving Ceci, who would proceed to owe Jarry the other 7 double IPAs Jarry on their next night off.

Little bit more Even Steven at 5s in the second, which you would expect from a period that was littered with more penalties than trash under your favorite bridge hangout spot.

Pens came out and looked smothering, but more importantly Zohorna looked like he was playing against AHLers offensively and drew a penalty about 6 minutes in after just undressing everyone and their mothers.  Sorry, Mrs. Fox.

Crosby got dinged for goaltender interference to end it, the Rangers fans were chanting “Crosby sucks,” but it was with their heavy shithead accents so it really just sounded like 100 people chewing on dog toys.

Pens killed the abbreviated penalty too, then would really put their foot on the throat of the Blue Shirts.

What a play to get this goal going by Matheson at the blue line.  Just reckless abandon stepping up and forcing the turnover, but then Ceci’s patience to both suck in two forecheckers and give Rodrigues and Zucker time to get up ice really was the icing on the cake.

But the Rangers would not just go away, at least temporarily.

Tough play here from Gooey’s Dad after the clearance.  Buchnevich winds it up like he’s Geno and drives right at the heart of the Pens defense.  This time, Matheson gives up the line a little too easily with a more passive gap.

He makes a play on the puck, but only after he was too far back in the zone and off balance.  Adam Fox comes in late and picks up the poked puck, drags Jarry way out of the net, and throws a little hoper into the crease for a grimy one out of Rooney.

Then with just under 5 minutes to play, the Pens went back to the powerplay when DJ Zibad got jammed over Letang having cooler hair, high sticking him in the neutral zone.

They wouldn’t score, but it killed off almost half of the remaining time on the clock before Quinn got Shesterkin out of the cage.

Big time puck hounding from the ZAR pick Fox’s pocket to get Jankowski a shot he couldn’t miss.

Right back at it again Friday night in Jersey for the first of two at the Rock to wrap up this 6 game road trip.