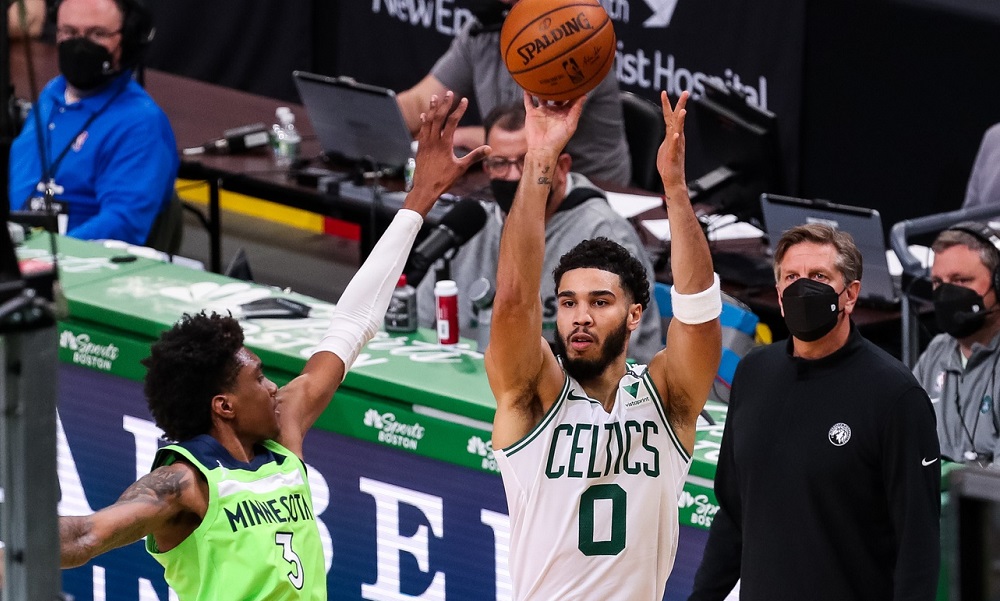 The following tweet perfectly summed up not just last night’s Celtics game, but their entire season.

Boston’s win over Minnesota saw the Celtics trail by 17, lead by 11 late in the fourth, blow that, get forced to overtime, and then win comfortably by 9 points. All of that against the team with the worst record in the NBA. Roller coaster.

But fortunately, the Celtics have Jayson Tatum on their side, and Tatum contributed a new career-high to the cause.

“Scoring 50 is a big thing in this league, and especially at this age,” Tatum said. “It’ll be a night I always remember. First 50-point game and we got the win on top of that. Big win. Every win right now is big.”

Tatum carried the Celtics to victory as they took care of the Timberwolves in the extra period. Tatum’s career night helped boost his teammates, who delivered down the stretch of the win.

The efficiency stuck out for Tatum as a major point. He was 16-of-25 from the field, including a 6-for-10 showing from 3-point range. The All-Star did just about everything, including adding 10 rebounds and four assists.

MassLive: Celtics’ Jayson Tatum on career-high in win over the Timberwolves: ‘It’ll be a night I always remember’

“Tatum was super special tonight,” Brad Stevens said. “That’s coming off a heavy minute night the night before. Don’t mistake his quiet demeanor for not being a competitor. He is a competitor.”

“He just wouldn’t let us lose,” Celtics coach Brad Stevens said of Tatum. “When we were coming back in the third, you could see he had it. The guys did a good job finding him. Don’t mistake his quiet demeanor for [not] being a competitor. He is a competitor.”

Globe: Career night for Jayson Tatum, and other observations from a battling Celtics victory against NBA-worst Minnesota

Tatum is clearly the Celtics’ best player, but because the team has been up and down this season, he was criticized this week by certain sports talkers. You know, the people who will say anything for attention. One of the critics actually tweeted, “It is obvious that Tatum does not want to here.”

I don’t know what he based that on, but it seems like a pretty bad take after last night. Here’s a better take.

Some fans: Tatum plays like he’s done with Boston.

Tatum has his faults, no question. He relies too much on isolations and squeezing off sidestep threes (although he’s damn good at scoring off those moves). He’s too demonstrative toward the officials; last night he got T’d up for slamming the ball down after a foul call (although he also lived at the line, unusual for him). But Tatum’s talent is off the charts, and last night was proof.

For what it’s worth, Paul Pierce’s career high was an even 50, accomplished against LeBron and the Cavs, also an OT game. But the Celtics lost that night. Deuce’s Dad has already one-upped the Truth.

On Page 2: 5 thoughts about the game

They finally got there

That was a crucial win for the Celtics, to finish out the home stand with a winning record (4-3). A loss would’ve hurt the Cs because they now begin a three-game Western trip to Denver, Portland and the Lakers. If they can win two of those, it will be a successful week.

The Celtics don’t do anything the easy way. Once again, they allowed a lottery team to push them around and lead big (39-25) after one quarter. Boston finally made it a game late in the third, then held an 11-point lead with under three minutes to play.

However, no lead is safe in today’s NBA, and even a team that’s now 13-40 has talented players who can catch fire at any time. The Celtics relaxed a bit, were thinking about Tatum approaching 50, and managed to miss 5 of their last 6 shots while the T-Wolves made 5 of their last 6.

Boston atoned in the OT, shooting 5 of 8 with 3 threes plus 8 of 9 at the FT line. Kemba Walker (game-high 9 assists but cold most of the night) drilled two clutch triples. The Cs escaped what would’ve been the worst loss of the year. Can’t even argue with this passive-aggressive tweet.

Celtics put the league on notice tonight. If they shoot 54/45/94, and Tatum scores 53, and they get 34 free throws, they can, on any given night, beat the Timberwolves in OT at home.

Another recent target of criticism, mostly for his shot selection, Smart has come on lately and had a great game against the T-Wolves. The third quarter was Smart’s best: 11 points, perfect shooting, several standout defensive plays, and he even guarded 6-foot-11 beast Karl-Anthony Towns successfully (just 4 points in the quarter). KAT also drew a technical for elbowing Marcus in the head.

Jaylen got it done too.

Jaylen Brown: A 26 point, 9-15 shooting, 5 rebound, 3 assist night is going to fly under the radar because of Tatum’s career high. However it was pretty cool for him to drop that late-game dunk for him realizing Tatum was on his way to 50. Those little things mean a lot to teammates.

Jaylen was a helluva wingman to Jayson last night. He capped off the game with 7 points and an assist in the OT. The “drop that late-game dunk” referred to JB going in alone for an easy two, but stopping and dishing it to his partner for points 47 and 48.

They simply cannot stay out of the way. Brad Stevens challenged a foul on a Minnesota layup. The call was upheld because, as the ref explained, Kemba’s arm brushed the shooter’s hair.

Touching the hair is a foul?

Technical fouls became an issue, too. As noted above, JT was hit with a tech, and Kemba also got a T for yelling after he was called for a foul. But when KAT screamed directly at the refs? Crickets.

So KAT can scream in two officials faces and no tech given, but Kemba does and gets T'd up. Smh. These refs man. Smh.

Boston committed 21 turnovers that cost them 24 Minnesota points. They’ve given away the ball 58 times in the last three games.

And, finally… The COVID impact

Every day, the Celtics add to their league lead in player-days lost to the pandemic.

This means that Fournier will be out at Denver, at Portland and at the Lakers.

Earliest return would be on 4/17 against the Warriors when the Celtics are back in Boston. https://t.co/jrXthHGRep

The effect that COVID has had on this season is undeniable. More than half the roster has missed time because of the health and safety protocols, and several players have contracted the disease. Fortunately, everyone has recovered enough to play basketball again – except Fournier, at the moment.

Fans should take this into account when judging this team, but they don’t seem to – and I’m guilty of that too. Maybe we should take a cue from Handsome Jake.

They have been completely unable to get anything going because they are in and out of quarantine. Some of them actually even had Covid.

Why would I get mad at them for struggling when I myself can barely get through my job? Lol