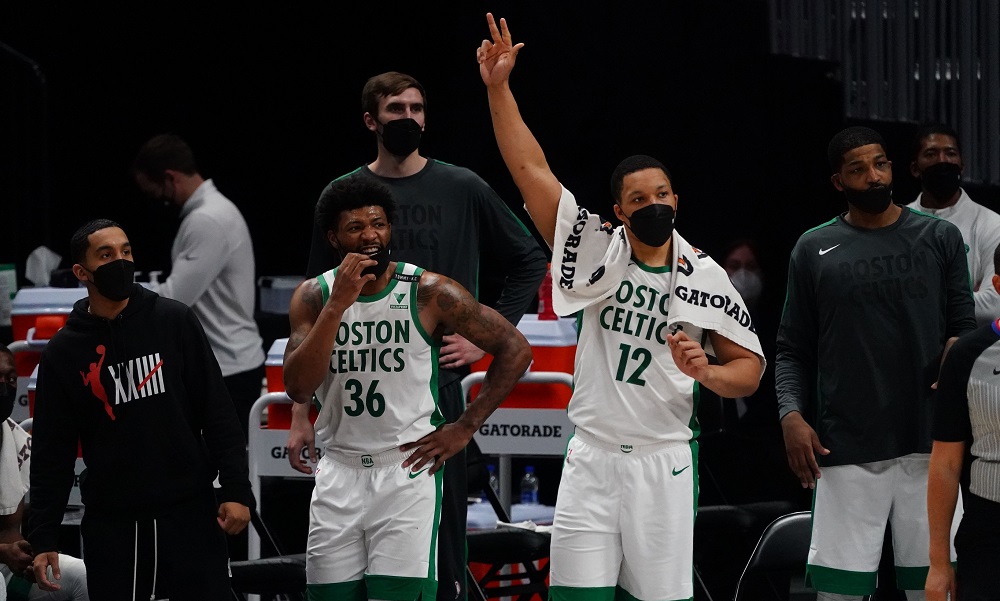 Looking back at one of the better wins during this Celtics season:

Tatum was feeling ill on Saturday and almost didn’t play Sunday, but he did and finished with 28 points (half of them in the fourth) and 10 rebounds. He was 8 of 8 at the line, a great sign that he’s not settling for jump shots. As the tweet indicates, he’s been on fire.

The Celtics have won three straight, trailing in the 4th quarter in all three.

They arrived in Oklahoma City March 25th ranked 28th in the NBA in the 4th quarter (-6.5 net rating).

They're easily the NBA's best 4th quarter team since, winning it in all 9 games they've played. pic.twitter.com/mYTpdhD0SK

We’ve been wanting the Celtics to put in 48 minutes of effort, and that’s what we witnessed against Denver. The result was the incredible 40-8 run over the final 15 minutes. The Nuggets disappeared like the gif of Homer Simpson fading into the bushes.

The Nuggets led, 79-65, but over the last three minutes of the third, the Celtics forced four turnovers and scored on four driving layups, including an and-one by Kemba Walker with a half-second remaining.

In the fourth quarter, the Nuggets were on the ropes, so the Celtics did what Tommy would’ve wanted: stepped on their throat by attacking the paint. The Cs made 10 of 14 two-pointers and 2 of 6 threes in the 12 minutes.

This new-found ability to execute in the fourth quarter could be a season-changer. Brad didn’t seem too excited, though.

Grant and the defense

Again, gotta stress; the Celtics just played awesome defense. The switch just completely melted them. Grant Williams was a huge part of that turnaround after a pretty rough season.

Nikola Jokic didn’t score much in the first half, but he shredded Boston’s defense with 6 assists. He followed that with 14/4/5 in the third quarter alone. But in the fourth, Jokic checked in with Boston up 82-80 and Denver trying to stop the collapse. Grant matched up and held the MVP candidate scoreless – 0 for 3, 2 fouls, 1 turnover – during a 4-minute stretch. Jokic was then pulled for the final 5 minutes as the Nuggets surrendered. He finished with 17/10/11, a somewhat hollow triple-double.

The Celtics have now beaten the Nuggets twice, previously winning in Boston, 112-99, despite Jokic dropping 43 points. Denver averages 115 points per game, so holding them under 100 twice is an accomplishment.

Not a game goes by where the officiating doesn’t become an issue. Yesterday, everyone was pissed at the refs. In the second quarter, Tatum and Jokic were hit with technicals about a minute apart for complaining after calls. And then there was this:

Romeo appreciated Grant sticking up for him lol pic.twitter.com/lqriqgZxm6

This was clearly a frustration foul by JaMychal Green, as it came in the midst of the Celtics’ huge run. The foul was followed by a push as the whistle was blown. In today’s NBA, this is absolutely excessive contact and probably a flagrant foul – yet the refs didn’t even take a minute to look at the video. That was confusing, because we’ve all seen that type of action called flagrant many times.

Part of the problem is the review criteria seem completely inconsistent from game to game. What one crew deems excessive is ignored by another crew. But beyond that, the entire replay system is flawed and needs an overhaul. If the reason for replay is to get calls right, it’s a failure.

By the way, Green’s foul put Romeo on the free throw line, and he made both to give the Cs their first lead of the game. It was the only lead change they needed.

‘Their own dunk contest’

Scal is often criticized for talking too much, but this time he got off a good one-liner.

"Celtics getting involved in their own dunk contest"#Celtics Rewind presented by @tmobile pic.twitter.com/CcdJbX3qlD