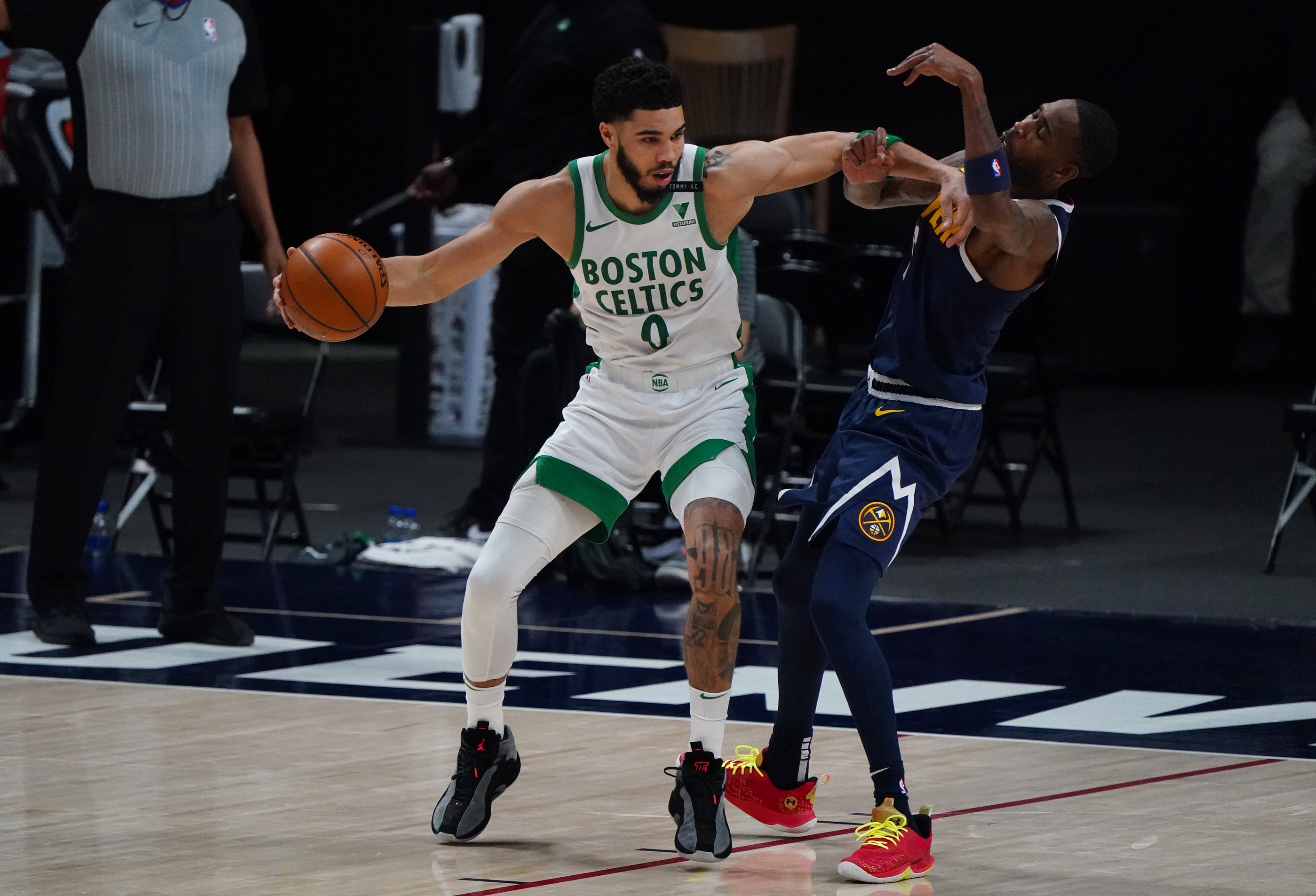 After losing to Philadelphia Tuesday, the Celtics won three straight games over the New York Knicks, the Timberwolves and Nuggets.

There’s not much of a surprise here. Tatum had a career night on Friday and was a key part of a stunning Celtic victory on Sunday.

My brother-in-law stopped by on Sunday and talked about his bout with COVID-19 last winter.* In addition to feeling like crap during the course of the illness, for several months after recovering, from time to time his lungs would burn. He said it was over six months before he felt that he was back to normal. Now, granted, he’s 44, not 23, but still, that’s a sobering reminder that this disease has long-term consequences.

Fortunately for the C’s Tatum’s game seems to have rounded back into pre-COVID shape. His three-point shooting isn’t as good as it was pre-COVID, but he’s spending much less time setting up his shots. One of the key traits of his COVID recovery was that he was slowing the game down. He was dribbling more before shooting and holding the ball longer before shooting. Now his numbers in those areas are, if anything, better than they were before he came down with the disease.

As someone who was on the ‘patience’ bandwagon before the season even started, this latest run by the C’s—who have won seven of their last ten, with a point differential over that period of +33—feels good. Especially since two of those wins were over Milwaukee and Denver, with the C’s playing short-handed in both of those games.

A subset of obnoxious C’s fans have wanted this team gutted like a walleye on a stringer, and I am enjoying their graceless volte-face almost as much as I’m enjoying the performance of the team.

The team has been decimated by illness—but apparently the explanation for the midseason struggles was not this, it was ‘poor roster construction’—as if it were possible to assemble a roster capable of performing at a first place clip while being down multiple starters and rotation players. Poor play on the court was due to guys ‘tuning out Stevens’ and not because from one night to the next player availability was so different that guys couldn’t get comfortable with their roles.

A team that was among the league’s best in defense for years was suddenly in the bottom tier and that meant it was time to fire Stevens—rather than being an indication that the team’s best defender was first injured and then on a tight minutes restriction, and that guys were having to work so hard on offense that it was affecting their defense.

And the gloom-and-doom extends to more than just casual fans. After last week’s loss to the Sixers, old friend John Karalis said that the game was a reminder that the C’s were just not in the same class as Philly.

The C’s—who found out that Evan Fournier would not be available at around 10:00 the morning of the game, and who were already without Tristan Thompson—were, indeed, not in the same class as a full-strength Sixers team, but that’s the whole point: The yardstick has been skewed for most of the season. The C’s have been at full strength so rarely that you can’t make a legitimate comparison between them and the top teams in the East.

This team, at full-strength, is a formidable opponent. The problem is not that the team has underachieved or that they are ‘not in the same class’ as other teams, it is that they have so rarely been at full-strength.

*FYI: All of us have been vaccinated.