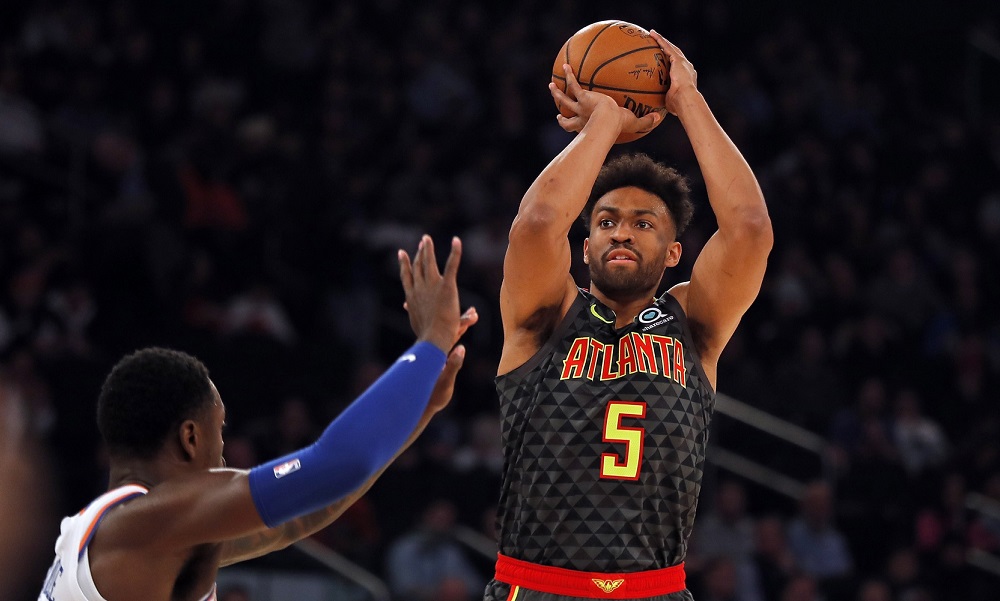 There was no game last night, but if Celtics beat writers were enjoying a free evening, that came to an abrupt halt when these tweets hit.

Jabari Parker — the former No. 2 overall pick — has agreed to a two-year deal with the Celtics, sources said. Parker, a career 14.8 points per game scorer, gives Boston some depth in frontcourt. https://t.co/MBe2PXC5Fu

The Celtics are waiving Moe Wagner to create roster space for Jabari Parker, sources tell @TheAthletic @Stadium. Wagner has averaged nearly six points and three rebounds this season, and was productive in his starts in Washington prior to being traded.

The team later confirmed the news.

Parker, who was selected with the No. 2 overall pick in the 2014 NBA Draft, has mostly failed to live up to draft expectations during his seven-year career. In his first four seasons with the Bucks, he averaged 15.3 points per game, scoring a career-high 20.1 points per game in the 2016-17 season.

Since his rookie contract ended with the Bucks in 2018, Parker has bounced around the league. He scored 14.5 points per game with the Bulls and Wizards in 2018-19. Parker signed with the Hawks prior to the 2019-20 season, averaging 15 points per game in Atlanta before getting traded in February that season to the Kings.

Parker failed to get much playing time in Sacramento, seeing action in just nine games over the last two seasons. He was waived by the Kings in March, making him eligible to play in this season’s playoffs.

This move was unexpected, as all of Danny Ainge’s moves are. (The rumor mill is always wrong about the Celtics.) Wagner was here such a short time that we never determined if his name is Mo or Moe.

The last no. 2 pick that the Celtics signed as a free agent was Evan Turner, and that worked out pretty well. Coincidentally, Turner was 26 when he came to Boston and Parker is 26 now, which is young for someone in his seventh season. ET is now part of the Boston coaching staff, and also was a teammate of Parker’s in Atlanta last season.

Parker is a 6-foot-8 power forward who operates primarily in the paint. He’s shot 49.3% for his career on 12.1 attempts per game, and 32.3% from the arc on 2.2 attempts per game. His success rate rises to 38.4% on corner threes. Parker’s full statistics and more appear on his Basketball Reference page.

Here’s a look at Parker’s best recent performance, in the final game of last season, wearing no. 33 for the Kings.

Some useful reactions to the signing.

Couple of things on the Celtics signing Jabari Parker:

My best guess as to why Boston added Jabari Parker:

-They didn't need a 5th big, which is what Wagner was. Tacko can fill that role.

-When Parker has played, he's always been a scoring threat.

-The bench does lack scoring punch at times.

-It's a no-risk addition for Boston

Adding Parker in place of Wagner is a can’t-lose transaction for the Celtics. Anything Jabari produces will be more than Moe was going to provide. The Cs still have enough bigs without Wagner, and now possibly Parker will provide more than Semi Ojeleye, who we know is a stout defender but a wildly inconsistent shooter. Also, Aaron Nesmith probably won’t see the floor any more except in extreme garbage time, but he wasn’t going to get any playoff minutes anyway.

After the near total meltdown in the fourth quarter on Thursday, no one would ever say the bench was fine as is. The Celtics needed an upgrade, and now, with Evan Fournier and Jabari Parker, they have it.

On Page 2: More love for Jaylen

The Celtics never trailed, and it became hairy only when coach Brad Stevens thought a 27-point lead was safe and inserted the end of his bench, which allowed a 22-2 run (more on that later).

But the best part about this win, one that thrust the Celtics into a tie for fourth place in the Eastern Conference, was the prowess of Brown, who was 17 of 20 from the floor, including an admirable halfcourt heave to end the third quarter.

Brown’s April has been as impressive as Jayson Tatum’s. Brown is averaging 24.8 points and 7.0 rebounds per game, and shooting 44.8 percent on 3-pointers. The most encouraging aspect of this recent stretch is that Tatum and Brown have reasserted themselves at the perfect time.

Globe: Celtics took it to the undermanned Lakers from the start, and that’s a good sign

The NBA has had many superstar duos over the years. Baylor and West, Stockton and Malone, Jordan and Pippen, Shaq and Kobe, to name a few. The Celtics have Tatum and Brown, who are certainly not at the level of those all-time greats – yet – but the potential is there.

The Celtics have usually had trios to lead them. Havlicek, White and Cowens. Bird, Parish and McHale. Pierce, Garnett and Allen. The only recent duo of note was Pierce and Antoine Walker, but they didn’t achieve enough to be in this conversation.

Between The Jays, the spotlight mostly shines on Jayson (all-NBA, two-time All-Star, Subway commercials), and he’s earned it. But Jaylen (a first-time All-Star this year) is getting his share now, too. Dropping 40 on 17 of 20 shooting in a TNT game will get some favorable attention.

Both Jays have won a Player of the Week award this season. Tatum is averaging 25.6 points and Brown is at 24.6. Both are completely capable of taking over any game at any time. This season, Jayson has battled Covid-19 and Jaylen has been dealing with knee tendinitis.

The point to all of this is just to say that while Tatum is Star No. 1, Jaylen is not No. 2, he’s No. 1A. They are both that good, and I hope all Celtics fans can appreciate what they’re witnessing.

It’ll be the second straight game Williams misses because of the left knee, which is more around the calf area, according to Celtics coach Brad Stevens. It’s mostly swelling, Stevens said Thursday, and mostly a day-to-day issue, but they’re being cautious with the big man.

Fournier has missed the past six games after being bogged down by health and safety protocols. The former Magic sharpshooter was in a recent tear, hitting 10 straight 3-pointers, but has been shelved of late. There’s still no timeline for when Fournier is expected to be back with the Celtics.

Boston Sports Journal: The evolution of Kemba Walker: how he’s adjusting to a more complementary role