As a high school social studies teacher, and one who teaches American History we talk about seminal events that changed the direction of our nation.  Sadly, many of those events are tragic; especially those that make such a profound impact that you remember where you were when you witnessed them and all of the other little details of that experience.  What was going through your mind in regards to thoughts or feelings.

Sometimes though, it can be for positive experiences so incredible it can conjure up memories that can’t help but bring a smile to one’s face.  For me, it was that semi-final Friday, March 8th, 1996 on UPN 9 watching the Minnesota Boys High School hockey tournament between Apple Valley and Duluth East.  I was a junior in high school and I was downstairs in our living room watching the game by myself on the couch.  I didn’t want to be anywhere else.  I remember my mom came down around the start of the 3rd period, some time around 10PM to remind me I had to get up early on Saturday to do something (I still have no idea what that could have been) and that I should go to bed immediately after the game’s conclusion.  I told my mom that’s fine and I continued to watch.  And as everyone knows, the game just kept going on, from the 1st overtime to the 5th.

It was around the 4th overtime, at around 1:30AM my mom came downstairs to yell at me and say, “hey, I thought you said you were going to go to bed after the game was over!”  I said, “Yes, I will, but the game is still going.”  She said, “You must be joking.”  I said, “No, its the 4th overtime, come down here and watch it if you don’t believe me.”  She sighed and went back to bed probably thinking I was lying to her.  I’m glad I didn’t go to bed, because I stayed up for yet another overtime to finally see the greatest high school hockey game in history come to an end on Aaron Dwyer‘s slap shot to give Apple Valley a 5-4 victory for the ages. 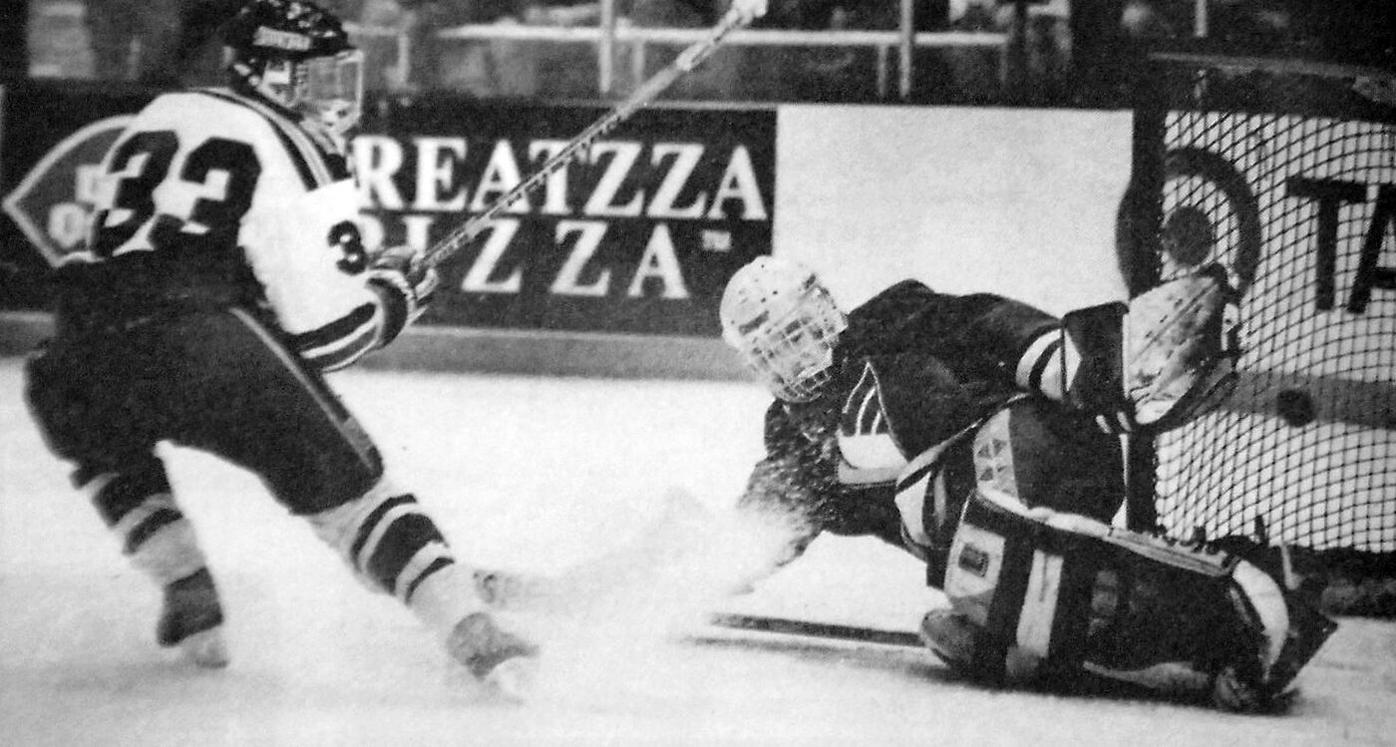 I realize when you say this was the greatest high school hockey game ever, especially in the state of Minnesota that’s a pretty bold take.  However, that’s a hill I’m ready and willing to die on.  It really was as good as people say it was and Marathon on Ice captures the essence of that legendary game perfectly.

It brings together the key figures of that game including the players like Duluth East’s Dave Spehar, Chris Locker, Dylan Mills, Ryan Coole, Andy Wheeler and Kyle Kolquist and Apple Valley’s Chris Sikich, Nick Gretz, Tim Murphy, Karl Goehring, Matt Skogstad, Aaron Dwyer and Erik Westrum as well as coaches like Mike Randolph, Pat Westrum, and broadcasters Wally Shaver and Lou Nanne who were the ‘voice of the game’ for all of us watching at home.  Longtime sports news broadcasters Jeff Grayson and Randy Shaver provide great perspective just how big of a sporting event the Tourney is and this game’s place in its storied history.  Bally Sports’ play-by-play man Anthony LaPanta narrates, but most of the storytelling is done by those who were a part of this event itself.

One of the great parts of the film, beyond the hearing the thoughts of the players, coaches and broadcasters who lived in the event is the fact director Aaron Briner chose to include the events leading up to this semi-final showdown in 1996 by telling the story of Duluth East’s rise as a hockey powerhouse when it dethroned the mighty Bloomington Jefferson Jaguars the previous season.   In my opinion it provides important context to understand how fantastic Duluth East was, that they toppled one of the best metro-area powerhouses who had just completed a 3-peat of state championships prior to the 1995 season.  For the film to include that context is important in setting the stage in this story.

Dave Spehar was already a household name by the time the 1996 Tourney rolled around and with all due respect to Minnesota Wild wunderkind, Kirill Kaprizov; Dave was the player would bring you out of your seat every time he touched the puck because you knew there was a chance he was going to do something special.  Maybe that’s another reason why this game stands out.  The North Stars had left for Dallas, so Minnesota had college and high school hockey as its go-to’s for its hockey fix.

Not to be lost, I also thought the visuals and cinematography by Murphy Byrnes was tremendous, especially the outdoor rinks where all of these players spent countless hours with friends honing their game in the years before this game.  Whether you were as fortunate as these people were to play in the State Tournament, if you spent much time in Minnesota as a kid you could relate to playing on those community rinks living out those dreams of someday (hopefully) getting there yourself.  I think the film does a great job of encapsulating how that was what so many young people in Minnesota who played the game dreamed about as kids.

Without spoiling any more of the film, which can be rented for $2.99 on Vimeo, or on their website Avenue18Productions.com the film is a must-watch or any Minnesota High School hockey fan whether you remember watching the game yourself or you never experienced it.  I know there is a lot of love for the Miracle on Ice of 1980, and deservedly so however to say I have a memory connected to that hockey event would be a pretty big stretch of the truth.  I was 2 years old when that happened.

However, the game that I always think about is this one and Marathon on Ice managed to make me re-live that experience in my mind all over again.  If you know someone who is always curious about what all the hype, buzz, or whatever superlative you wish to use to describe the Minnesota State Hockey Tournament is all about, have them watch this documentary so they can truly understand.

Thanks to all of those who helped sponsor the film giving Minnesota hockey fans another treat and chance to re-live one of the great moments in our state’s proud history with the game.  It was certainly a labor of love of a story that really needed to be re-told, and they did a fantastic job of doing just that!  Well done Marathon on Ice, well done!